Is Poch really all that? Are PSG football’s biggest bottlers?

Get your mails into theeditor@football365.com…

Is Poch all that?
As much as I love Poch, he seems to have an inferiority complex about him. What was that second half all about? How does a team go from being so dominant at a semi final, to being so submissive at home. I’m beginning to question, why all the love? I hear they are not even 1st in their league. Madness.
Dave (Just saying, coaching matters, it’s not always the players, just ask Lampard), Somewhere

…Can we now all agree that PSG are football’s biggest bottle jobs ever? Keylor Navas has to be the worse keeper for a so called top team, like City having Joe Hart back in goal, what he was doing for the first goal is anyone’s guess.
As a United fan this was hard to watch as City getting a chance to win the Champions League is bad but PSG Mbappe and Veratti excluded are the most disgusting set of diving cheating moaners in football. Milk may have a lotta bottle but PSG ain’t got shit.
Paul Murphy, Manchester

Guardiola’s ‘masterclass’
“Kyle Walker burst into view with the most brazen opposition to the concept of nominative determinism possible, his gallop behind the defence finally breaking Paris Saint-Germain’s resolve.”

Wow. Let’s forget the prose reminding me of Braveheart but with horses. Yes, City scored. And it did have a noticeable effect and they got the wind under their sails. And they scored again, through what can only be described as a cataclysmic fuck up from Navas. City did play well in the final half an hour, but this constitutes a “Masterclass” from Guardiola? Seriously?

History is most definitely written by the victors. PSG ran them ragged in the first half, and yes, City did well to show resolve and turn the screw in the second, as you would hope from a team of their stature. But how could Guardiola have known that? It was his fiendish plan to be shown up for 60 minutes and then get a one off massive goalkeeping error that was Kariusesque and then split the wall with a well taken set piece? No problem with either goal, that’s football, but that plus a Foden chance plus a sending off equals a masterclass?

City were good. Total props for getting the job done. You talk about hyperbole from other outlets but Baby Jesus is weeping uncontrollable tears if that performance was a “Masterclass”.

Well done City. All the best in the second leg. From the looks of it even if you lose, Maximus Decimus Guardiolaus will win the day.
Johnny Ironballs

Pep and Ole
Good win by City last night. People are finally going to start giving a manager credit for coming from behind to win a game. “Ole is that manager, right RDA?” I hear you ask. Nope. The man that will gain plaudits for winning games from a losing position is Pep, the man who has done it a mighty two times this season.

The only acceptable outcome is Real Madrid winning the CL. But how crazy would it be to have a Chelsea v City CL and FA Cup final, and a United v Arsenal Europa League final?

Now it’s over to Ole to overcome his semi final hoodoo, to overcome the final bludgeon used against him as a sign of his utter incompetence.

City can still screw this up
Watching the game last night with two very divergent halves, it got me thinking about the next leg.

Having seen both of them badly sh*t the bed in recent years, see Lyon, Liverpool, Spurs, Monaco, Barcelona, Madrid and Man Utd, it’s going to amazing to see who can crumble the most by next week.

City played very well in the second half though
Lee (Hornsey) 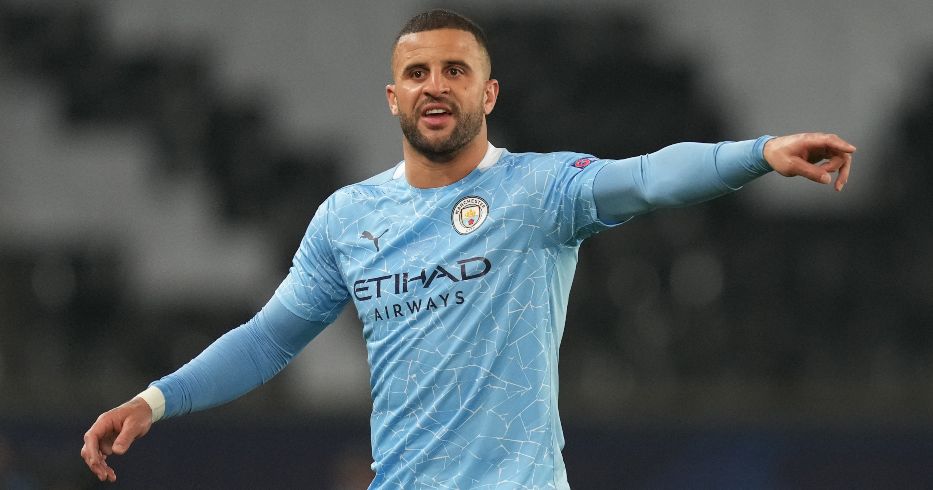 Super bots
Anyone else noticed a sudden abundance of comments along the lines of “You don’t get matches of this quality in the Premier League, wish we could have it every week!” sent in to all the champions league live feeds? How many accounts does the ESL have? We are not falling for it!
Rob, of Sweden (maybe Neymar just really likes the ground…).

Buy Ek
If Daniel ek is a billionaire, why is it a story that he has “secured funding”. Pay for it yourself you cheap bastard.
Dave

Sensible deals
Inspired by Timo Werner’s latest blootings and Chris Wood tearing apart a Wolves team that couldn’t land a shot in 15 rounds with the Wealdstone Raider, here’s a list of the obvious square peg in square holes transfers – one shot per club – for Premier league teams.

Liverpool: They still have an excellent squad. Great forwards, great midfielders and gr… a lot of defenders. That midfield is looking old and flat though. Milinković-Savić could have the physicality and class to revive it.

Man City: It’s not really worked out for Jesus the last couple of years. Kane would require a bid and a half so the cultured Dusan Vlahovic could be the striking solution. Although I suspect Pep won’t cease from mental fight until he’s replicated Spain’s strikerless Euro 2012 team on England’s green and pleasant land.

Man Utd: Cristiano Ronaldo. Might p*ss on Bruno Fernandes’s chips in the battle of the stat-padding penalty hoggers but it’s great bit of PR for the Glazers. A short-term solution for the misfiring Martial (who’s fated to end up at Inter), but a reliable solution nonetheless… assuming he can still hack it in a competitive league.

Chelsea: Rafa Varane is a worthy but unlikely target, but they’re yet another team where the real value is in upgrading the strikeforce. I don’t think that Werner is as bad as his recent form, but his mentality is questionable and he was bought off the back of his one great season. I’ll hate them for it, but bringing Erling Haaland in would be one hell of a statement.

Wolves: Wolverhampton may be the Burnley of the Midlands but Chris Wood is more Greggs’ custard pie than pastel de nata so won’t be going anywhere. But Wolves have problems. Willian Jose was never truly good enough. Fabio Silva isn’t either (yet) and we don’t know how Jimenez will recover. Atalanta’s Luis Muriel offers a different type of focal point but gives options from the start and the bench, should Jimenez come back firing.

West Ham: Similar problem to Wolves. Both need defensive reinforcements but the lack of decent/fit strikers is holding them back. Lingardinho’s hot streak won’t cover this up forever so Tammy Abraham is the very, very obvious choice.

Arsenal: Forget chasing Coutinho and his fan-baiting ‘legacy’ wages. Emi Buendia still looks like the solution. He scores and he creates.

Aston Villa: A great platform to get Curtis Jones battle-hardened on loan and see if he can truly make the step up.

Brighton and Hove Albion: Lumbering but prolific hitman Bas Dost could channel the spirit of Glenn Murray and get on the end of Pascal Gross’s set pieces.

Burnley: Hans Vanaken. Linked with higher profile clubs, ‘Skywalker’ would add bit of continental class yet fit in nicely with the Burnley ethos.

Crystal Palace: Plenty of areas due an upgrade but Fulham’s Antonee Robinson could add a bit more fizz to their flanks.

Everton: I just feel this would be Donny Van De Beek’s true home.

Leeds. One of those weird ‘systems’ clubs, like last season’s Sheffield United, where it’s difficult to see how good they are as the footballing laws of physics don’t seem to apply. That defence *should* need a boost yet somehow they’re doing fine. Bielsa knows best.

Leicester City: With Iheanacho now firing they have a delightfully balanced squad when fit but they need cover for their CBs or Ndidi. Boring I know.

Newcastle. As they’ve now decided to start playing it from the back – with mixed results – perhaps Joachim Andersen would be a good shout.

Southampton: Young prospect Andreas Skov Olsen could offer something different on the flanks before his value shoots up (and it will). They need to run (the rule over a) DMC too.

Tottenham: With Bale on his way and Bergwijn failing to impress, what about Leon Bailey? Spurs record with promising Bundesliga forwards has been pretty great.

Watford: They’ve been sturdy but not particularly prolific and, like West Brom last year, look ripe to go down again. Perhaps worth seeing if Ivan Toney can make the step up from Brentford’s finishing school for forwards.
Quarantino Asprilla, Bored of the Chairmen, ITFC

Broadcast koolaid
Finally something I could agree on from Johnny Nic – at least for a long time. Yes, the broadcasters control the game. They control all sports. Not earth shatteringly new, though.

That’s why start times change, games are pushed to Friday’s and Monday nights. Big 6 games can have their own slot while non Big 6 games can be played together. Or there are blackout rules.

The idea government can help, as some kind of arbiter of all things good is also hilarious. The same government that funds Olympic sports and works with organizing bodies to find sports that are less well represented for medals and contributes more in an expectation of gold medals that can be paraded around the world showing British is best.

If country A could convince the major broadcasters and sponsors that they would get more eyeballs than country B, they will be a shoe in to host that competition. The governing bodies know where, well, the bodies lie.

Point is, all this faux rage on the Super League by all but the fans, is fine but really not addressing the issues all clubs face. All governing bodies face. It’s just that the Super League people, reviled as being dishonest are in a way the most honest. And even fans – as we will soon be on the roundabout of who the club should buy or sell to buy, etc.

There are few clubs in the EPL or Championship that have not already drunk the broadcast koolaid. How many will survive poisoning themselves remains to be seen.
Paul McDevitt

Wrong jersey
I read Mikey cfc’s mail in the morning’s mailbox and i agree with him 100 per cent that its just doesn’t sit right to see hazard in a madrid jersey. You just can not imagine eden in any other team’s jersey.
It got me wondering which other players switched teams in their prime and they just don’t look right in the new jersey. ( no offence mikey but keane was already nearing the end if his career when he went to celtic so I won’t include him in this ) mind you i am not trying to draw a list of players who went to new clubs in search of glory and couldn’t. That list is excellently published by f365 recently. Its just how wrong it feels to see a player in a particular jersey. i will try to name a few
Fernando torres in chelsea blue
Coutinho in barca/bayern jersey
Thierry henry in barca jersey
Cristiano ronaldo in juventus stripes
Kaka in real madrid white
Di maria in red of Manchester
On the other hand i feel some players went from one big club to other and looked just natural fit for the new shirt. For example (arsenal fans might disagree) the moment van persie put on a united jersey i felt like he was born to wear it. Same thing for cron and real madrid.
What other names can my mailbox friends come up with In both categories ? Might be an interesting discussion.
Swapnil, mumbai (man utd)

The post Is Poch really all that? Are PSG football’s biggest bottlers? appeared first on Football365.

City and Guardiola's demonstration against PSG impresses all of Europe

Georginio Wijnaldum explains why he preferred PSG to Barça