If Kroenke truly cared, he would sell Arsenal now…

It was interesting watching Graeme Souness on Sky Sports attempting to make viewers understand the business principles behind the Glazer family’s neglect of Manchester United. Maybe this sort of thing is unique to football, that we must understand the need for owners to make money out of our clubs. We must, of course, listen to reason.

Before Man United’s clash against Liverpool turned into a commentary of the protests at Old Trafford, last week we were live at the scene as well. But this time it was Arsenal’s ground which was showing that football had truly started to eat itself.

The coverage was brilliant. Pretty much every London-based football writer had congregated within the collective fury outside the Emirates Stadium. They provided updates and filtered through pictures of red mist, noise, flags and organised chaos to social media. Something remarkable was unfolding. Short videos of chants and angst. Faces full of exhilaration and disdain. And yet you felt part of it, knowing all too well the reasons why.

Some of the protest signs were comical, presumably not to trivialise the point but instead to have their message go viral. Other signs were more on the nose, stating the obvious point: ‘Kroenke Out’, ‘Get Out Of Our Club’, ‘We Want Our Club Back’, et al. 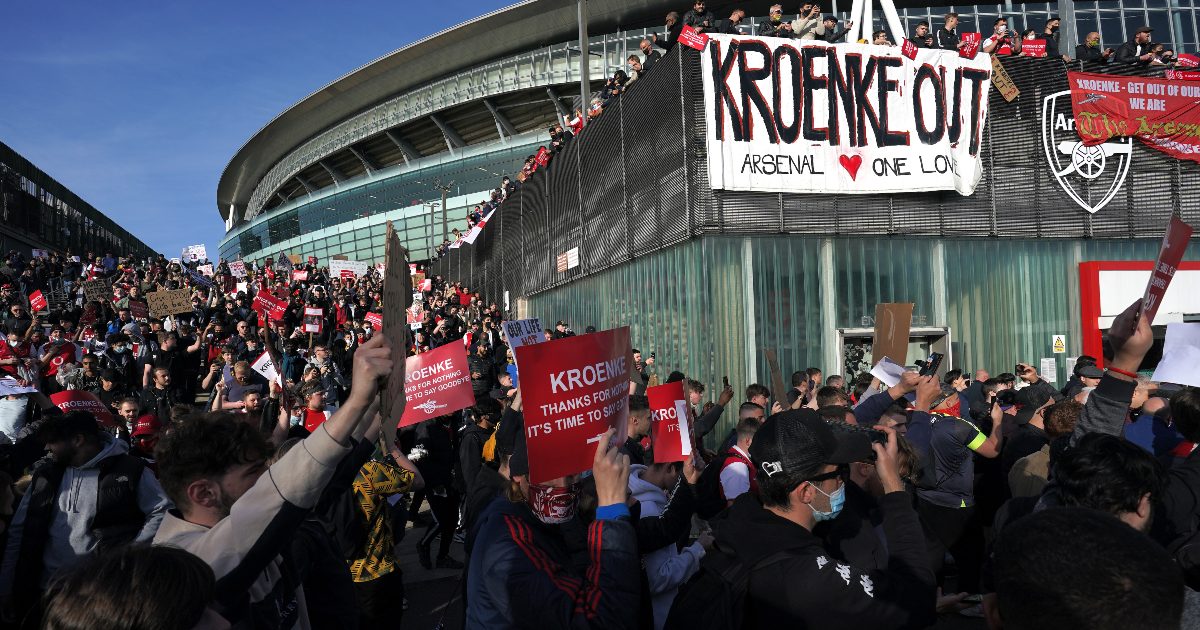 Of course, for reasons owing to the pandemic, the stadium would not be occupied for Arsenal fans to make their case to TV viewers during the game against Everton, so they used their initiative. They made themselves so loud and raucous they could be heard even by the cameras picking up the game from the inside; fans were fervent enough that their noise managed to power over the wall of their airline-named stadium into the ground and through our TV sets.

Was the commotion purely down to the failed European Super League?

That particular oversight was, indeed, a very powerful catalyst, but it was only one of a string of misgivings.

The inevitable subsequent pithy apology was published on the Arsenal official site: ‘It was never our intention to cause such distress, however when the invitation to join the Super League came, while knowing there were no guarantees, we did not want to be left behind to ensure we protected Arsenal and its future.’

That was the extent of it – PR-tight discourse to calm the dissenting bellows of their customers. And really that’s always been the extent of the relationship between Kroenke and Arsenal fans. It’s maddening to think that’s the case, given how Kroenke is constantly claiming to share the same vision for success as supporters. And yet he still remains behind closed doors, spewing his hollow apologies via digitalised words, just as he has ever done.

The Super League has been lamented enough now. We realise those cretinous behemoths really are that selfish and out of touch and disgustingly money-oriented to the point of club harlotry. But now we have arrived at an awkward junction. Like a recently divorced embittered couple meeting once again for their son’s birthday, we are going to have to make do and have a relationship with our clubs, even temporarily, through gritted teeth.

Arsenal was one of the six clubs to backtrack on one of the most grotesque ideas since the Premier League thought £14.95 for a match was a suitable fee, but what’s different about the Gunners is that the owners were almost immediately given a rare opportunity to make amends.

Daniel Ek, Swedish billionaire and CEO of Spotify, has cleverly joined a consortium of Arsenal heroes to purchase the club from KSE in what has been described as a very lucrative and very real offer. Ek claims to be a hardened fan who even watched games during board meetings; if that soundbite might seem to stretch the truth, all reports indicate he’s deadly serious with his intention, stating he does have the funds to take on Arsenal and take them to the next level.

The timing could not be more perfect: the season is riding on the second leg of the Villareal game, which they trail 2-1, while entry to European competition via the league is near-impossible now. They’re also out of every domestic cup competition. Questions are now being rightly asked for Mikel Arteta, but for now, there is a bigger enemy to contend with, and that bigger enemy remains adamant he is staying put.

In a statement to Bloomberg, the owner and his son Josh stated they will not accept an offer: “In recent days we have noted media speculation regarding a potential takeover bid for Arsenal Football Club. We remain 100 per cent committed to Arsenal and are not selling any stake in the club. We have not received any offer and we will not entertain any offer. Our ambition for Arsenal remains to compete to win the biggest trophies in the game and our focus remains on improving our competitiveness on the pitch to achieve this.”

See also  The English press ignites for Riyad Mahrez and Manchester City, Neymar increasingly close to a return to Barcelona

It takes a real lack of empathy to stubbornly continue to do something that will enrage and upset hundreds of thousands. Kroenke had enough time to rekindle what’s traditionally a title-challenging club, almost a decade in fact, but they have regressed under his stewardship, not showing nearly enough ambition: another case of a club with boundless potential constrained by the shortsightedness of their owner. 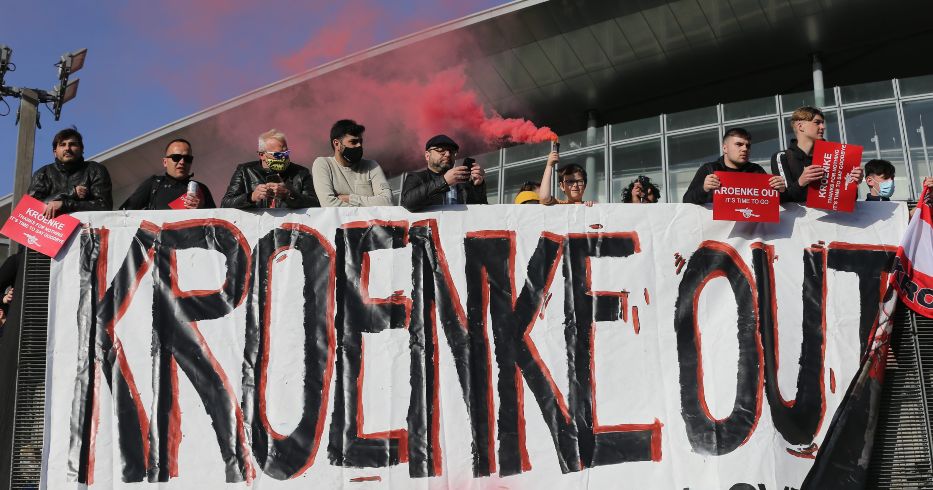 It was 2011 when Kroenke took over the club with a 66% stake. Since then they have spent the fifth-lowest out of the top six and made a £409million net spend; Chelsea, Man United and Man City have spent at least another £400million more. No club could surely compete against those who are doubling their expenditure in the transfer market.

But the issue is far bigger than the lack of spending on transfers. Not once in the 11 years since Kroenke first bought shares in the club – he now owns 90% – has he invested his own money into the team, while their ticket prices remain obscenely high.

Arsenal boasts one of the highest matchday incomes in the Premier League; some 24% of their money comes from the gate, as per 2018 figures, and yet they still have the most expensive matchday tickets (2020). Their high-end season tickets start from £2,995. Their cheapest is £891 as of 2019, more than £200 more than Liverpool and £500 more than Man City. They have a cracking hospitality package, though; the cheapest you’ll find is £229 for one meal and a single complimentary drink.

As per The Athletic: ‘Kroenke accepted a wrong decision had been made on the Super League but insisted the choice had been made for the right reason. They also made it clear that KSE had covered more than £200 million in stadium debt, and three costly transfer windows, with Arsenal expected to lose in excess of £100 million this year.’

In fact, Arsenal are the club with the most outstanding fees in the entire Premier League – £154million. That’s six million quid more than the Glazers at Man United in second spot.

Their gripe is shared cross-Atlantic. The former St Louis Rams feel aggrieved at Kroenke deciding to move their stadium all the way to California and rebranding them. Such anger did not stop him from changing direction and it’s unlikely it will on this occasion.

If we did take him at his word – he wants what’s best, remember – he would surely sell to someone more appropriate, someone who understands the principles of sporting venture as well as business. Instead, no, he clings on despite the huge opposition.

Unfortunately for Kroenke, this is the just beginning. There is no putting it to bed, no apology accepted. It’s why Arsenal will march again on May 6, perhaps in more droves, to ask the man whose money they could collectively never match to give someone else a chance, to make the right decision and sell.

Ek, the prospect buyer, recently said: “I just focus on the club, the fans and I focus on trying to bring the club back to glory and I’m first and foremost a fan. That’s the most important thing for me and I want the club to do better. That’s my primary interest.”

Jens Lehmann warned that Ek could just be another cowboy hoping to strip Arsenal further of its soul – business sense and a clear plan must go hand in hand with a 38-year-old CEO wanting to live out his childhood dream.

But with what KSE have done in their ten years in control, there would surely be no harm in taking a roll of the dice. Sometimes the devil you know is better for nobody.

The post If Kroenke truly cared, he would sell Arsenal now… appeared first on Football365.

Daniel Levy and Tottenham have f***ed themselves…