West Ham United are hoping to agree on a new deal with star defender Vladimir Coufal.

The Czech Republic international joined West Ham on a 3-year deal at the start of the last season and he has been a key player for David Moyes.

The former Slavia Prague player was one of the best signings in the Premier League last season and it is no surprise that the Hammers are looking to tie him down to a long-term contract.

According to Sky Sports, the Premier League side feel that Coufal is an important player and they are prepared to hand him an improved contract.

However, the report also states that the defender is currently disappointed with the terms West Ham have offered him. 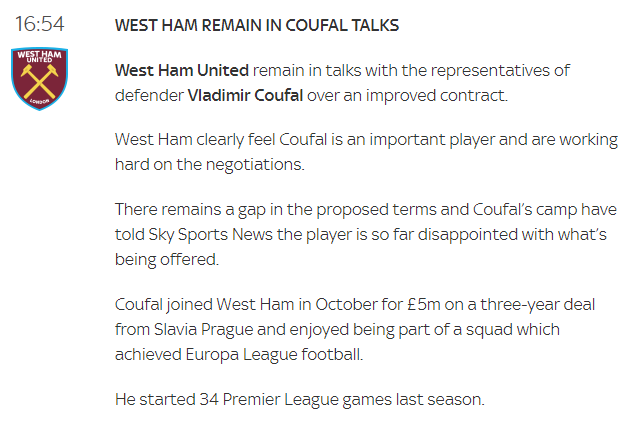 The Hammers will be playing in the Europa League next season and they will need to hold on to their best players in order to do well.

Coufal has proven himself to be an indispensable asset for the London club and he started 34 Premier League games last season.

Keeping him at the club for as long as possible should be a top priority for the Premier League side and West Ham should look to agree on an improved contract with the player as soon as possible.

The defender cost West Ham a fee of just £5 million last summer and he has proven to be one of their best bargains in recent years.

See also  How do England get the best out of Harry Kane?