The “straight ahead”, ugly mouth crime?

Criticized by their technical waste, by the lack of variation in their choice but above all by the fact that they rely too much or even exclusively on their speed, the nicknamed “straight” have become easy targets of criticism and mockery of all kinds. But are these mockeries and this nickname really justified?

Timo Werner, Kylian Mbappé, Kingsley Coman, Leroy Sané, Gareth Bale, Alphonso Davies … Here is a non-exhaustive list of players considered “straight” by some football fans. This expression, which has made a place for itself in the lexicon of football fans in the 2010s, refers to a player whose main, if not unique, characteristic is to be fast. They are also often compared to headless chickens that run fast but do not think.

If this expression has become popular among football fans, it is in large part due to EA Sports’ Fifa video game, which has always emphasized direct and fast play rather than construction. So much so that having fast players in its workforce greatly imbalances the balance of power between two players, which has caused frustration among many gamers who have drawn the parallel between fiction and reality.

It’s also why pivotal attackers or old-fashioned surface foxes are increasingly misunderstood. Except that the complexity and subtleties of every little technical-tactical detail that takes place on a real field have nothing to do with video games and that the relevance of some reviews is therefore completely erroneous by this lack of distinction.

The players categorized as “straight” are almost exclusively side players, either wingers or fullbacks. In reality, these players are essential to allow the team in possession of the ball to make the most of all the playing space of a football field, both in width and in length, in order to stretch. opposing defenses. Very often, these players stick the sidelines and make very straight races because this is precisely what is asked of them by their coach. 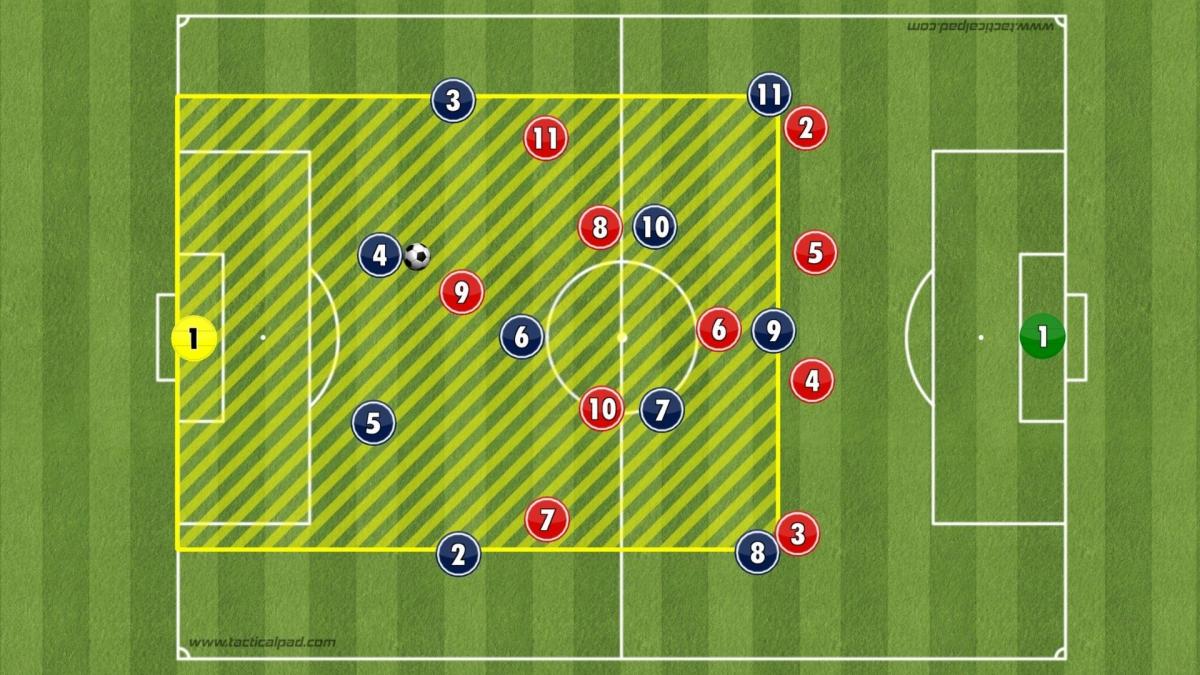 Just by having players farther apart sticking the lines, the playing surface expands and therefore gives more space to exploit for the players in the middle of the field.

“When Eric Abidal or Yaya Touré had the ball, I went deep. And what were the right-back and the opposing defender doing? They were retreating. And thanks to that, Iniesta had more space to have the ball. I used to do races for myself but at Barça I knew that if I didn’t do this race I couldn’t free Andrés. If I didn’t do this run, he had less time with the ball. There are races that I had to do to free up other spaces ”, explained Thierry Henry during an interview with Olivier Dacourt on Canal Plus. 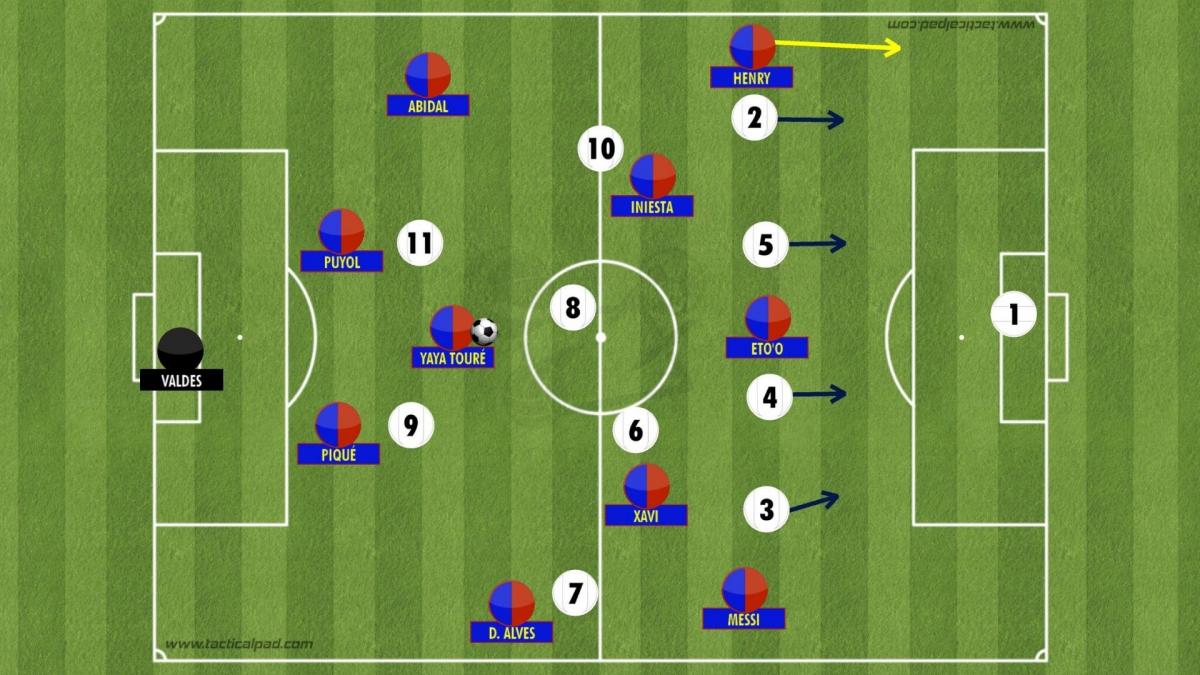 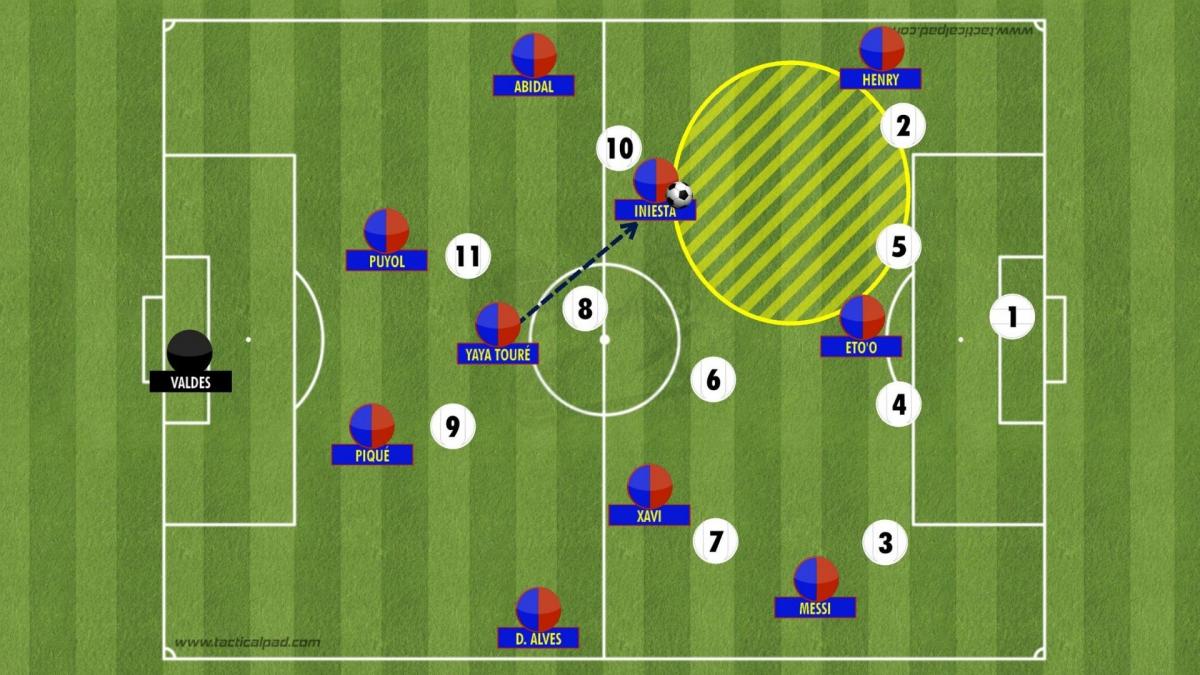 Thanks to a simple run for the winger, the space to be exploited for his teammate has widened

Generally, players with a natural predisposition for speed will logically bet on this quality to distinguish themselves in youth categories but the problem is that they will also be used in this way at the professional level if no coach decides to them. develop, for lack of time or for lack of conviction. Players with disproportionate qualities should therefore not be the only ones singled out when we talk about their lack.

” When I was small. I was just going fast. I needed 75 chances to score a goal but I was going fast, I was catching the people in speed. And Mr. Francisco Filho at Clairefontaine said to me: “You, today, I forbid you to take the speed players. Find other solutions. Move a little better, in the right timing”. We also had a strong enough defender for his age. He said to him: “you, you do not enter the duels. If you recover the ball, you must intercept it”. All of a sudden, this player started to read the game. He was already physical naturally and he started to read the game. He was also telling me: “Stop pushing the ball. Stare at the defender. Give him something. before leaving, you will gain even more time afterwards “”, always testified Thierry Henry during his interview with Olivier Dacourt. 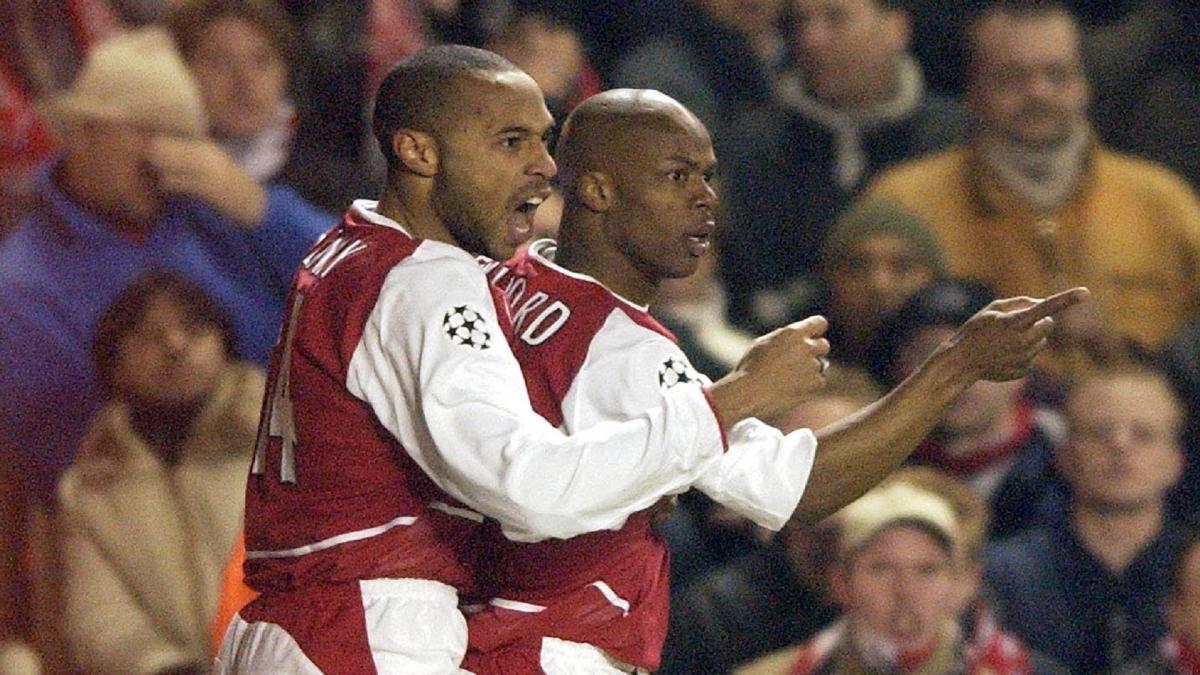 Under Pep Guardiola, Raheem Sterling went from a player with a “straight” profile to a much more complete attacker and less dependent on his speed. We can also underline that the quality of center of a Benjamin Mendy is more evident under Pep Guardiola because he finds himself less often in the position of a classic full-back who must center at the end of the chain because he does not have other solutions. The elaborate play and the principles of Manchester City help to make them achieve crosses in better arrangements and therefore of better quality.

The “straight ones” also have a lot of technical waste because they are often percussion players whose mission is precisely to provoke the ball at the feet and to play many duels, even if it means losing a lot, especially since they are are often found in areas of truth where spaces are increasingly reduced and where errors are more visible and glaring. Timo Werner’s failed face-to-face with Thibaut Courtois in the Champions League semi-final first leg between Chelsea and Real Madrid is more easily remembered than the ball Rodri lost in midfield at the start of the first leg. between PSG and Manchester City. However, the biggest technical error was made by the Spanish midfielder. 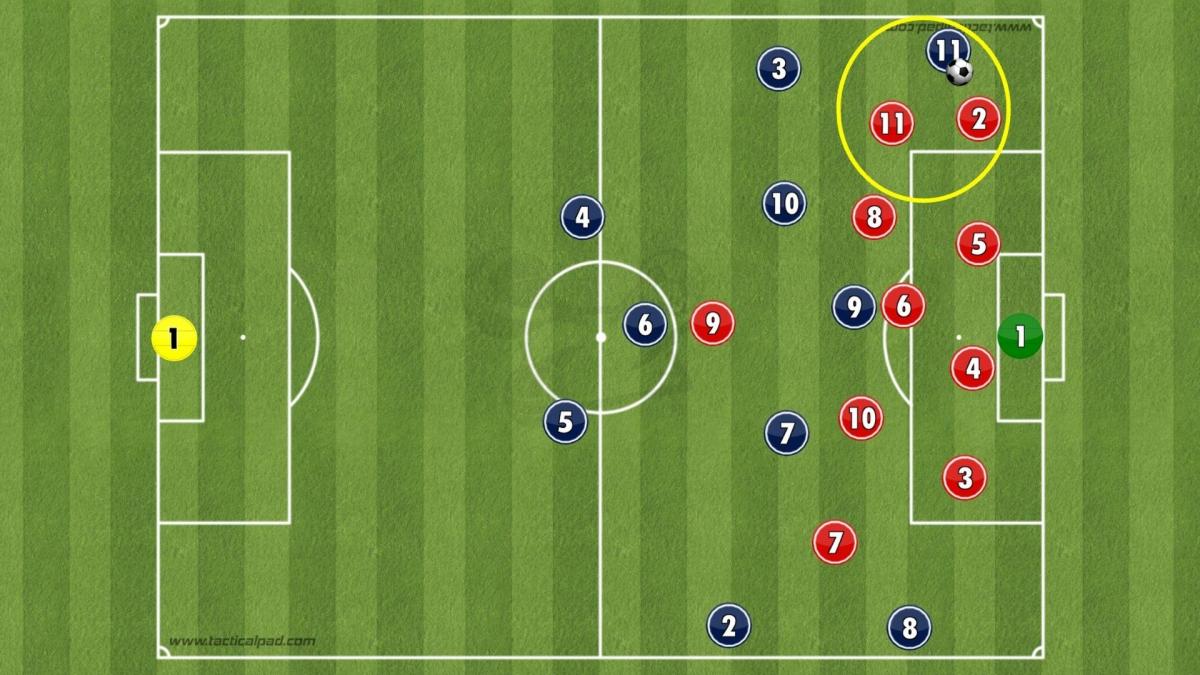 The “straight ones” are often percussion players who play many 1-on-1 or even 1-on-2 duels. Seeing them fail often makes sense

Asked by the magazine Eleven World at the start of 2021, Kingsley Coman expressed a certain annoyance at the shortcuts of certain observers and football fans about him: “When I am told that my speed is my biggest footballing quality, I don’t agree. My first quality is 1-on-1. If there’s a 1-on-1 to go and I need to bring a player back to the world, it’ll be me. Whereas if there is a race to go and I have to bring a player back to the world, it won’t be me. “

The “straight ones” also undoubtedly pay the fact that their quality of speed is disproportionate compared to their technical quality. “In the end, speed is a bit innate, it’s influenced by genetics. So some may wonder where is the merit of Kylian Mbappé? This side of a pure athlete and not an esthete or an artist in football may disturb some. There is probably also a little jealousy, because football fans have, for the most part, never been able to play at a very high level so they can envy someone who has natural predispositions that they do not. have not and who succeeded in part because of them. There can be a feeling of injustice vis-à-vis the players who rely a lot on their speed “, told us Delphine Herblin, sports psychologist.

Does a “straight line” really exist?

If the expression “straight” may amuse some, in fact, it is rather rare to see players only performing straight runs like a sprinter. In football, maximum speed races are very rare and what counts are changes of direction and starts or accelerations for a few meters.

“The expression ‘straight ahead’ makes me laugh, but in reality, it doesn’t really exist. What is hidden behind this term is the opposition that is made between very physically oriented players, that is to say the players who draw their quality around the physical like the players who go fast, and others who are very technically oriented. In football, players who combine the two equally are very rare. For me, a player like Mbappé is today rather physical-dependent and that is why he is the target of criticism ”, summarizes Jean-Benoit Morin, Doctor of Sports Sciences. 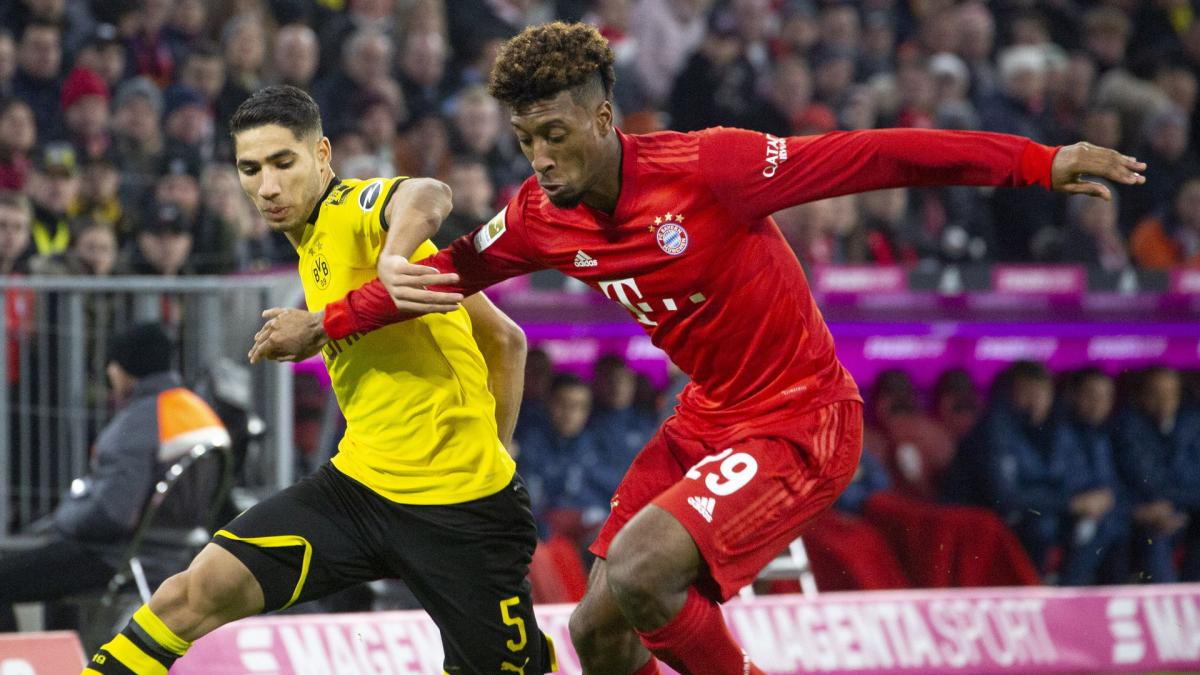 The French researcher adds: “I think that the positive point of this rather crude expression of ‘straight ahead’ is to warn about the dependence on speed because from a player development point of view, it limits it because it does not will not last a whole career, with a few exceptions, and that also makes him very dependent on his physical health. It should also be added that this dependence can stereotype these players, who will have difficulty playing in different game systems or even different teams, unlike other players who will have had to develop other qualities during their training. “

To conclude, players labeled as “straight” also suffer from a psychological bias that is very common among football fans: confirmation bias. A cognitive bias which consists in making us privilege the information confirming our preconceived ideas rather than those contradicting them, which contributes to lock us in opinions and prevents us from changing our opinion. People who see Gareth Bale as ‘straight ahead’, for example, only hold back actions that confirm their initial opinion and omit his other qualities like his ball hitting, which is a technical attribute. “Criticism doesn’t say so much about the person it is targeting, but more about the person issuing it. In truth, the criticism speaks of the one who utters it. So, we have to ask ourselves the question of what this affects them? “, argued Delphine Herblin. Straight on?