The final day of the 2020/21 Premier League season is upon us and all eyes are on the race for Champions League football. Chelsea and Liverpool are in the driving seat ahead of Sunday’s showdown but there is good reason to believe that Leicester – who slipped out of the top four on goal difference in midweek – can still usurp one of their rivals.

Chelsea, with one eye on the Champions League final, are the most likely to stumble against an Aston Villa side back to their best at Tottenham in midweek. Should Thomas Tuchel’s side drop two points then Leicester can leapfrog them with a win against Spurs (which ought to be simple enough given their recent form), but Brendan Rodgers cannot expect any help from a Crystal Palace side that got hammered 7-0 the last time they played Liverpool.

Here are three big tactical questions for the games that will decide the top four:

1) Can Grealish cause a problem down Chelsea’s changeable right?
Chelsea are clear favourites to win at Villa Park but following Villa’s 2-1 victory over Tottenham on Wednesday evening there is hope for a final twist in the battle. Jack Grealish made a triumphant return to the starting line-up in the No. 10 role, pinning Spurs back and taking advantage of the positional errors of Harry Winks, and although Grealish should return to the left wing on Sunday he can be just as influential.

Dean Smith will be wary of Chelsea’s speed in the transition. Villa are often guilty of playing too expansively against the top teams, leaving big gaps between the players and spending too long in possession in their own half. To do so against a high-pressing, quick-breaking Chelsea might be suicidal. Certainly Marvelous Nakamba, who was sloppy on the ball several times at Tottenham, is a worry – which is why Smith will likely play three in midfield and move Grealish out to the left.

Chelsea are weakest down their right, where Tuchel has tried a number of different options with varying degrees of success. His latest configuration is Reece James as a right-sided centre-back and Cesar Azpilicueta at right wing-back, an awkward and unexpected combination that certainly could come unstuck with Grealish running at them.

If Villa can stay compact and show enough humility in possession then Grealish can cause an upset.

2) Will Mason’s midfield issues hand Leicester the three points?
Brendan Rodgers moved to a 3-4-2-1 for Tuesday’s game at Chelsea and by doing so he left Jamie Vardy alone to press from the front – therefore allowing Chelsea’s back three to easily step out and progress up the pitch. On the hour mark Rodgers switched to 3-4-1-2 and the game flipped: Leicester held 34.5% possession in the first hour and 53.5% after the formation change.

Surely, then, Rodgers will return to a 3-4-1-2 formation for this match to ensure Leicester press with coherence and assert themselves on a brittle Tottenham midfield. Ryan Mason continues to struggle to find the right midfield combination, largely because their shape is too top-heavy and stretched vertically; Dele Alli is disconnected from the two midfielders, creating a passive and disjointed system.

But the problem is also partly the result of the players Mason picks. Tanguy Ndombele continues to be left out and Giovani Lo Celso was dropped to the bench for the Villa defeat, despite the fact Spurs desperately need an assertive, line-breaking passer in the middle. Without one, Leicester’s Wilfred Ndidi and Youri Tielemans should be able to dominate as Kelechi Iheanacho and Vardy lead the press – pushing Spurs back and forcing the issue. 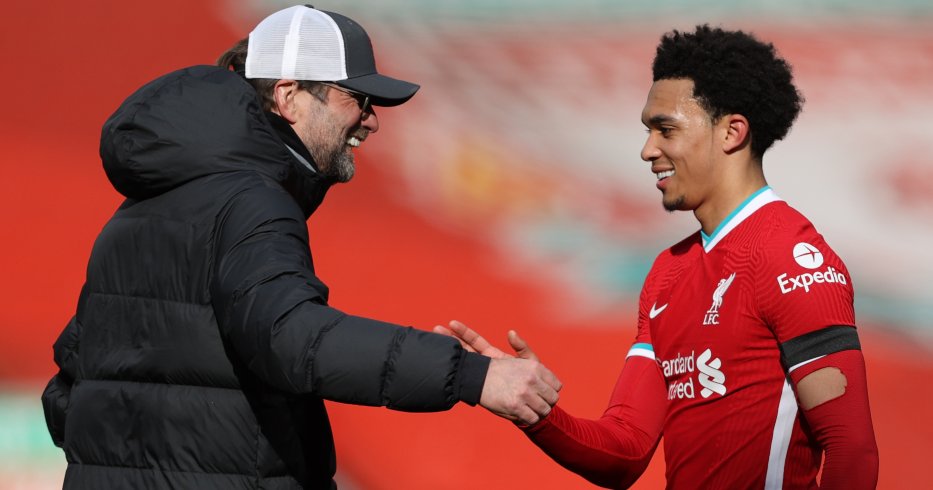 3) Will TAA and Thiago make it a final-day walkover for Liverpool?
The most predictable of the three games is at Anfield where in-form Liverpool should make it five wins from five through Thiago and Trent Alexander-Arnold, who are just the players to exploit the issues with Roy Hodgson’s deep and narrow 4-4-2. Liverpool have won their last two meetings with Crystal Palace by an aggregate score of 11-0 due to a serious tactical mismatch that Hodgson is seemingly unwilling to change.

In short, Palace are far too narrow. They regularly camp on the edge of their own box and leave the flanks open, which is fine when playing a team that like to cut inside but dangerous when Andrew Robertson and Alexander-Arnold are on the pitch. With Sadio Mane and Mohamed Salah occupying the full-backs from a narrow position, it will only take a simple long diagonal from the back to get Alexander-Arnold into dangerous positions.

But first Liverpool need to pin Palace back to grind them down, which was the most important tactical feature of their 2019/20 season and the one thing missing most from 2020/21 (particularly when Fabinho was played in central defence). The main reason for Liverpool’s recent upturn is that Thiago has found his feet, anticipating and intercepting well to keep the pressure on. He should create the foundation for a thumping Liverpool win.