Liverpool kept their faint top-four hopes alive but the unconvincing manner of the 2-0 victory at home to Southampton does not bode well for their Champions League aspirations.

Jurgen Klopp’s side stumbled over the line for only a second league win at Anfield in 2021 thanks to Sadio Mane’s first-half header and Thiago Alcantara’s first goal for the club in the 90th minute.

At this stage of the campaign results rather than performances are the preference and considering Liverpool’s woeful home record this year, this was a welcome boost after conceding late equalisers in their previous two matches.

Chelsea’s added-time winner at Manchester City had put Thomas Tuchel’s side into third just before kick-off, setting Leicester as Liverpool’s new primary target – who were nine points ahead.

It also meant Klopp was without his three first-choice central defenders plus the two he signed in January as cover.

His lack of resources showed with Ben Woodburn, who spent the first half of the season on loan at Blackpool, in the squad for the first time in two years alongside 18-year-old centre-back Billy Koumetio, making his debut on a Premier League bench.

The game quickly settled into a familiar pattern at Anfield of chances created but not converted with Fraser Forster, returning in goal, twice saving from Salah and once from Diogo Jota while Jannik Vestergaard blocked Thiago’s follow-up.

But from a similar far-post position, Mane made no mistake from Salah’s 31st-minute cross – the first time this season the pair had combined for a Premier League goal.

It was the conclusion of a pivotal passage of play as 46 seconds earlier, Alisson Becker had blocked Che Adams’ shot and caught Nathan Redmond’s rebound as Saints began to build some threat.

Klopp was less happy after the goal than before it as Southampton pushed back with Kyle Walker-Peters sending a cross-shot wide and Nathan Tella directing a six-yard header straight at Alisson.

Normal service was restored after the break with Jota forcing Forster into a near-post save and Phillips getting his header all wrong on the edge of the six-yard box but it faded much quicker than the first-half start. 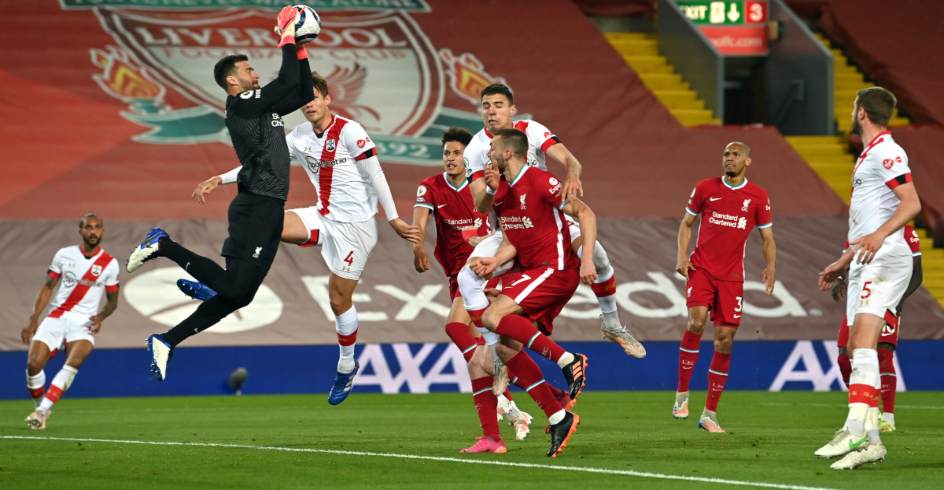 Liverpool resorted to keep-ball, without really threatening, in order to nullify the visitors but it still required Alisson to dive at the feet of Michael Obafemi and push over fellow substitute Ibrahima Diallo’s drive.

But even the goalkeeper was not infallible and was lucky to escape when a mishit clearance straight to Adams was returned back to him when the Saints forward should really have scored.

Jota’s weak shot wide was his last action before being replaced by Roberto Firmino, while Mane’s volley past Forster was ruled out for offside as the match entered a nervy final 10 minutes.

Thiago slotting into the Kop goal from outside the edge of the penalty area just as the clocked ticked past 90 minutes ended the hosts’ anxiety but on this evidence there will be more to come.

And the worrying is far from over for Saints, who are not mathematically safe and a 13th defeat in 17 matches leaves them still looking over their shoulders.

Discovering Marco Majouga, a talent from Nîmes at the crossroads