Get the rave on? The soundtrack around the England goal is more likely to be soothing whale noises these days…

For all the qualities Joe Hart had – being called “a phenomenon” by Lionel Messi certainly made his head swell – he never quite mastered performing for England  during international tournaments. Hart even admitted it publicly: “Obviously the Euros (2016) wasn’t my finest hour. I’ve got a lot of energy and a lot of passion. Questionably it could have been too much.” Yep. It was.

One remembers the Hartdog screaming and shouting in Lens before playing Wales, followed by a flailing mass of limbs that were unable to keep out Gareth Bale’s half-decent free-kick.

Hart at full throttle was the keeper that Jordan Pickford could have become in an England shirt. There was a worrying trend over recent seasons at Goodison Park that suggested he had caught the same disease of tics, eccentricities and a desire to be heard just for the sake of it. These can be harmless. However, they can also portray a feeling of internal aggravation that destabilises everyone. In the not too distant past, Pickford possessed a raging bull light that got triggered too easily into a fight or flight mode.

Everton and England will benefit from a ‘calmer’ Pickford

Remember, this is the man who was described by one of his former teammates at Sunderland as a “nutter” (in a nice way) unable to control his mood when things went badly. All of this makes his current state of calm but combative ‘sedation’ highly impressive.

Despite all his travails and growing pains at Everton, the separation from the tribalism of club football seems to work in the 27-year-old’s favour. It is difficult to remember a time when he has ever let England down. Pickford has made many superlative stops for his club – that is on record – but some of his best work has been with the Three Lions. Even when England were breathing heavily in extra-time against Croatia in the cauldron of the 2018 World Cup semi-final, Pickford made a no-holds-barred save from Mario Mandzukic. That was almost forgotten in the misery of the defeat. It was an “over my dead body” moment and deserved to pull his country to at least a penalty shoot-out.

WHAT A SAVE! Pickford brilliantly denies Mandzukic with his feet! pic.twitter.com/CmoUgnKRVr

Here’s the thing. When Pickford has been in that vortex, where his animated body leaps up even for shots that are going miles wide or over and his legs have wrapped around the body of Virgil Van Dijk, the issue has been to try and break up that wild kinetic energy. Goalkeeping is hard enough for those restless souls that just need to be involved for their own wellbeing. It is never a passive position. There’s a chuntering Nick Kyrgios kind of motor that is running in Pickford’s neurones. He has done exceptionally well to hone that into something more workable on the pitch. The personality is still there. That hasn’t been neutered. He’s just earthed the plug.

The Wearsider admitted he has been working with a psychologist to search for those marginal gains that elite athletes strive for.

“You know in football, those little one or two per cent gains — just to raise your ability on the pitch and what you can achieve — are crucial. Whether it’s nutrition, psychology, extra gym sessions. I think it helps. So why not use it?”

“It’s crucial and I feel that I have kicked on this year. I feel calmer, I feel in the moment and I feel great.”

We noticed, Jordan. Being “in the moment” and free of the washing machine distractions that have previously kicked his concentration into touch is a skill worth having. His public pronouncements are from a measured team script, a million miles away from his previous ranting at the press. 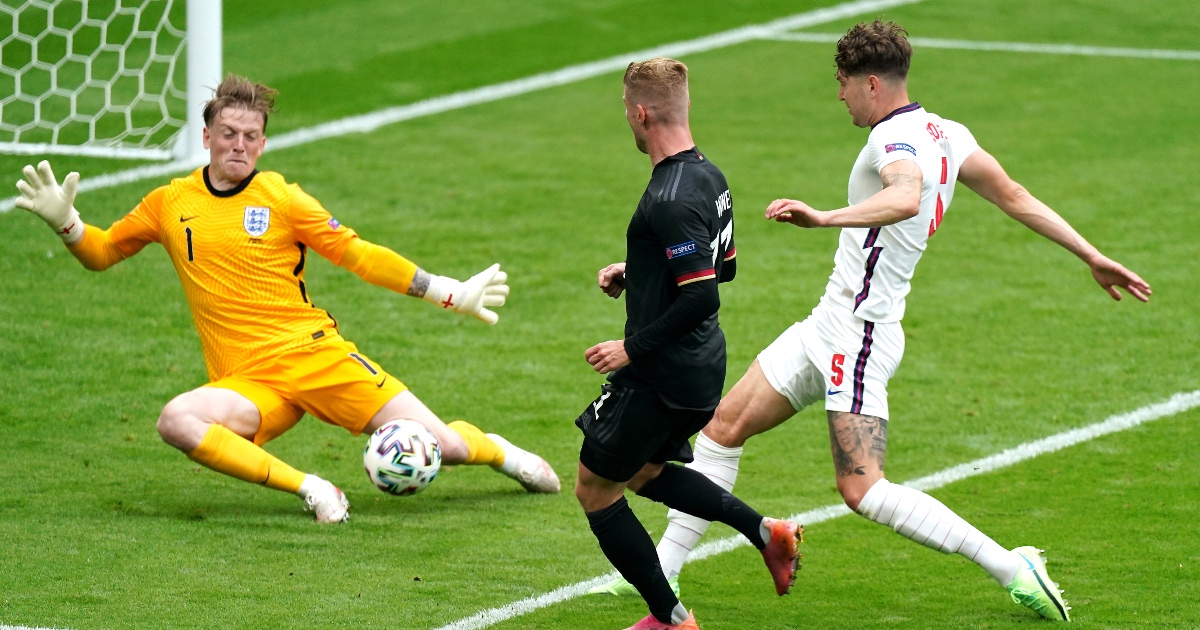 Snooker legend Steve Davis once said that the key to success was playing as if it means nothing when it means everything. What is training if it is then somehow skewed by the mentality of fear or confusion at vital moments during match day? Fortunately, the Toffees keeper appears totally at ease with the concept of knockout tournament pressure. He embraces it. At the moment, Pickford’s shouting and screaming is coming at the right time on the pitch. One can only imagine his apoplectic reaction had Thomas Muller rolled the ball into the corner rather than wide.

Next stop: Rome. The pressure points are being ramped up and there will be a reckoning that will test his resolve and new-found serenity. However, England’s No.1 looks like he’s formed something long-term that will overcome and outlast any inevitable mistakes.

PSG is approaching the demands of the Pogba clan