The Hammers will head into the action still firmly in the hunt for a top-four finish.

At present, West Ham sit 5th in the English top-flight, just two points adrift of Chelsea, who face a tough test in the form of a showdown with Manchester City this weekend.

Everton, on the other hand, will not be finishing in the Champions League places this season.

However, Carlo Ancelotti’s side do still have a chance to secure Europa League football for 2021/22.

The Toffees are 8th in the Premier League as things stand, but have a game in hand on 6th-placed Tottenham, whom they sit just four points behind.

If Everton truly wish to secure a top-six finish, though, they will need to put an end to a dismal spell of recent form, which has seen them notch just one win from their last five outings.

The latest on Declan Rice and James Rodriguez

Ahead of the clash, David Moyes, on Friday, provided an update on the sidelined Declan Rice:

“We’re getting closer to getting Declan back because we’re a week down the line. He’s back on the grass and closing in on it and we’ll try and get him back as soon as we can.”

Carlo Ancelotti also spoke to the media, and confirmed that James Rodriguez is out of Sunday’s game:

Ancelotti says James Rodriguez is out but Abdoulaye Doucoure is available 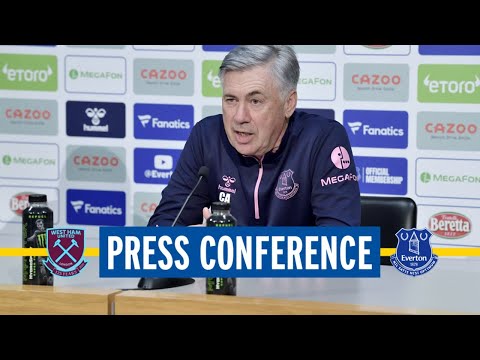 Everton head to West Ham on Sunday, but who will be fit to face…

Tyldesley and McCoist: The Euro 2020 champions