How France will play with Karim Benzema during the Euro

After more than 5 years of absence with the jersey of the France team, Karim Benzema will make his comeback at Euro 2020. Unless there is a big surprise, the Madrid striker should be established during the competition by Didier Deschamps. But in which system?

October 8, 2015. This is the date of Karim Benzema’s last match with the France team. That evening, at the Allianz Riviera in Nice, Benzema had been aligned in a 4-3-3 accompanied by Griezmann and Matthieu Valbuena in front and had scored a double. Above all, he showed a good technical bond with Antoine Griezmann, who materialized in the 35th minute with a goal from the current FC Barcelona player following a combination with Benzema.

Since then, almost 6 years have passed. The France team rebuilt without the Real Madrid striker and even won a World Cup and played a Euro final. Antoine Griezmann is also no longer able to evolve on the wing and Kylian Mbappé has emerged. So much so that the tactical configurations experienced by Karim Benzema with the blue jersey are no longer valid today and that he will have to integrate into new systems where Antoine Griezmann and Kylian Mbappé seem essential. How can Didier Deschamps go about it?

The tactical device favored by Didier Deschamps during major meetings over the past five years has been his asymmetric 4-3-1-2, with three versatile midfielders including one off-center to the left, one 10 (Antoine Griezmann) and two attackers, one of which is completely off-center. to the right. After the version with Matuidi during Euro 2016 and the 2018 World Cup, Didier Deschamps delivered a new-look version to Portugal during the Nations League at the end of 2020, with Rabiot in place of Matuidi in the eccentric left midfielder and Martial at the Giroud’s place in front (not counting Coman by attacking off-center right in place of Mbappé, injured and absent during this gathering of the Blues).

That evening in Lisbon, the Blues had delivered a very good performance thanks in particular to the different animation that the presence of Rabiot and Martial allowed, instead of Matuidi and Giroud, in the eleven. We can therefore imagine Karim Benzema in place of Martial even if the animation will not be completely identical given the different profile of the Real Madrid striker. In this configuration and with Benzema in the eleven, Rabiot should be less offensive and less positioned in the half-spaces and in the center to leave this zone free for Karim Benzema and Antoine Griezmann. The association of the two La Liga strikers remains very interesting on paper because neither of them is a pure new one, but they both have a great quality of finish in addition to sharing a great quality of creation. This suggests that the two players switch roles and positions. When Benzema is in support, Griezmann will take depth and vice versa. 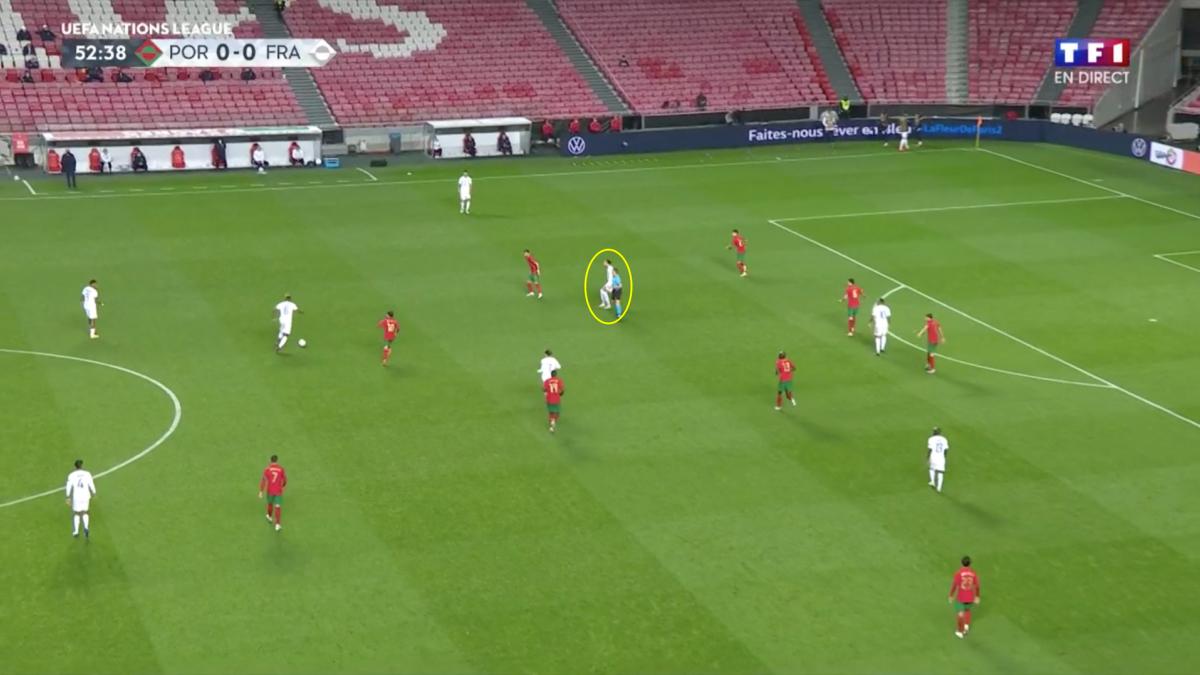 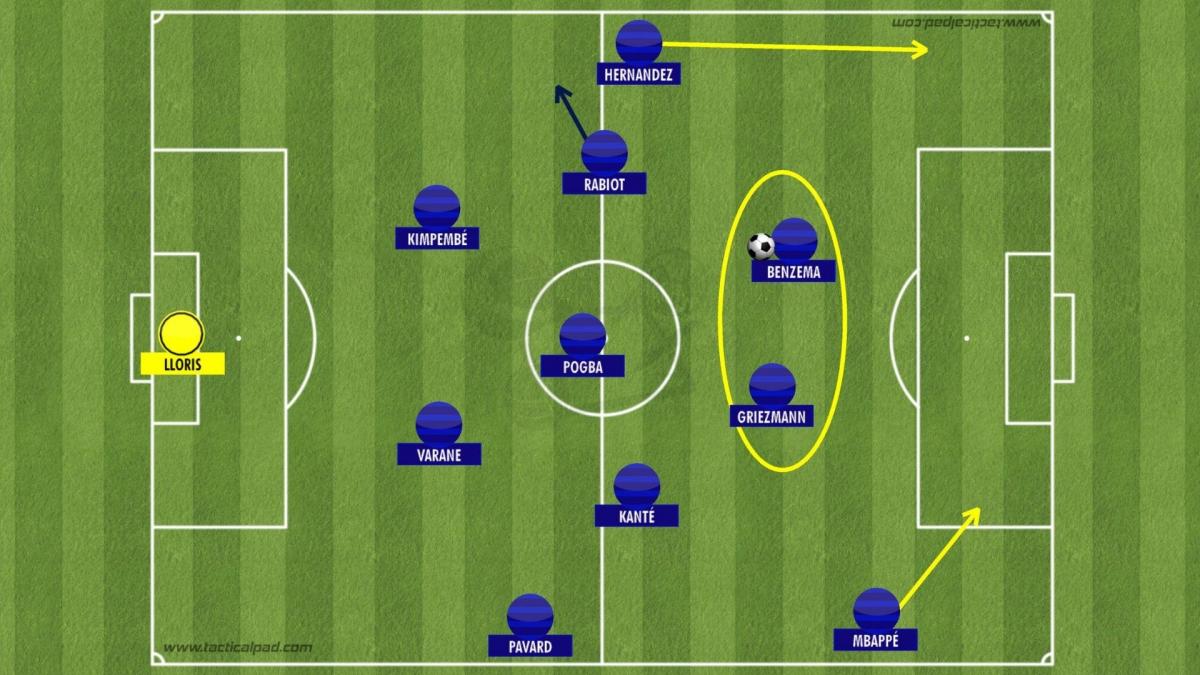 But of course, having these two players in the heart of the game will free up space on the sides for Kylian Mbappé, who is perhaps the big winner of Benzema’s return to the Blues. The Parisian striker will be able to gorge himself on the good balls of Griezmann and Benzema and the presence of this infernal trio will give puzzles to future opponents of the Blues who will have to make choices and choose their poison. 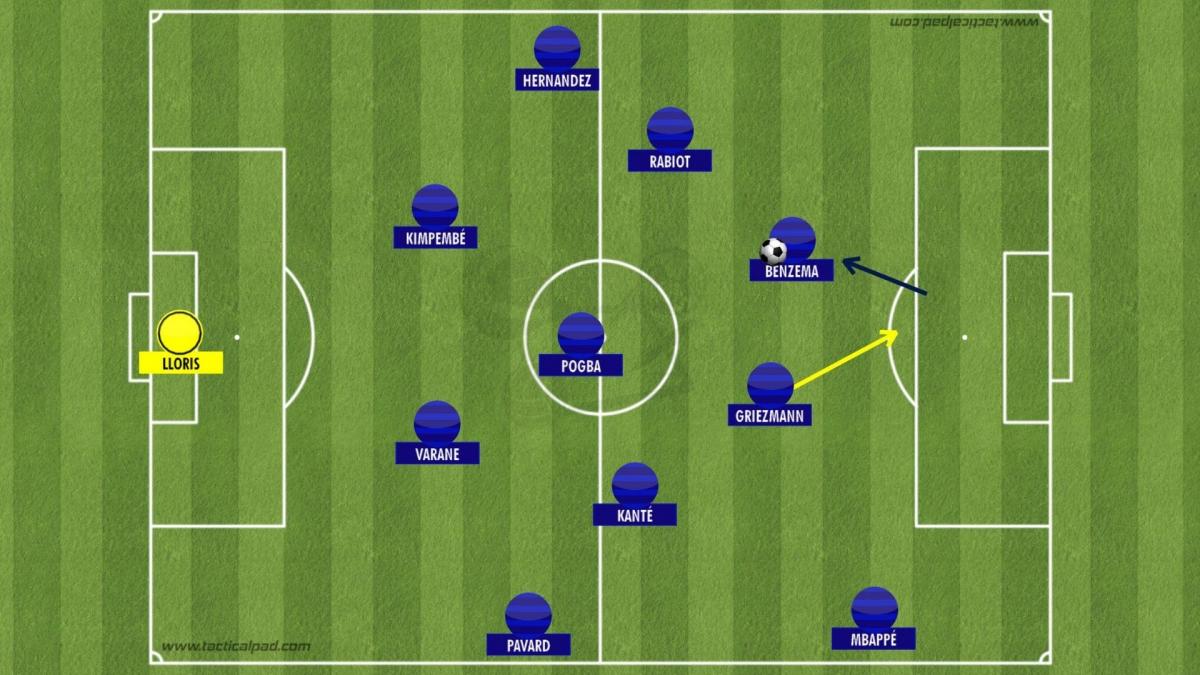 This 4-3-1-2 is undoubtedly the device that offers the most balance to this team, a very important concept in the eyes of the coach. It also has the advantage of being well known and integrated by the majority of the players in the squad. Only Karim Benzema will have to take his bearings quickly, but given his tactical intelligence and technical qualities, this should not be an insurmountable obstacle.

The starting device with the most offensive look would be a 4-2-3-1 (which can also be likened to a 4-4-2). We would keep the configuration with Karim Benzema and Antoine Griezmann in 9 and 10 close but instead of having an eccentric central midfielder, it would be a question of aligning a real overflow winger like Kingsley Coman or Ousmane Dembélé. In this device, we can even imagine Didier Deschamps align Kylian Mbappé on the left, to put him in a configuration closer to what he knows at PSG. 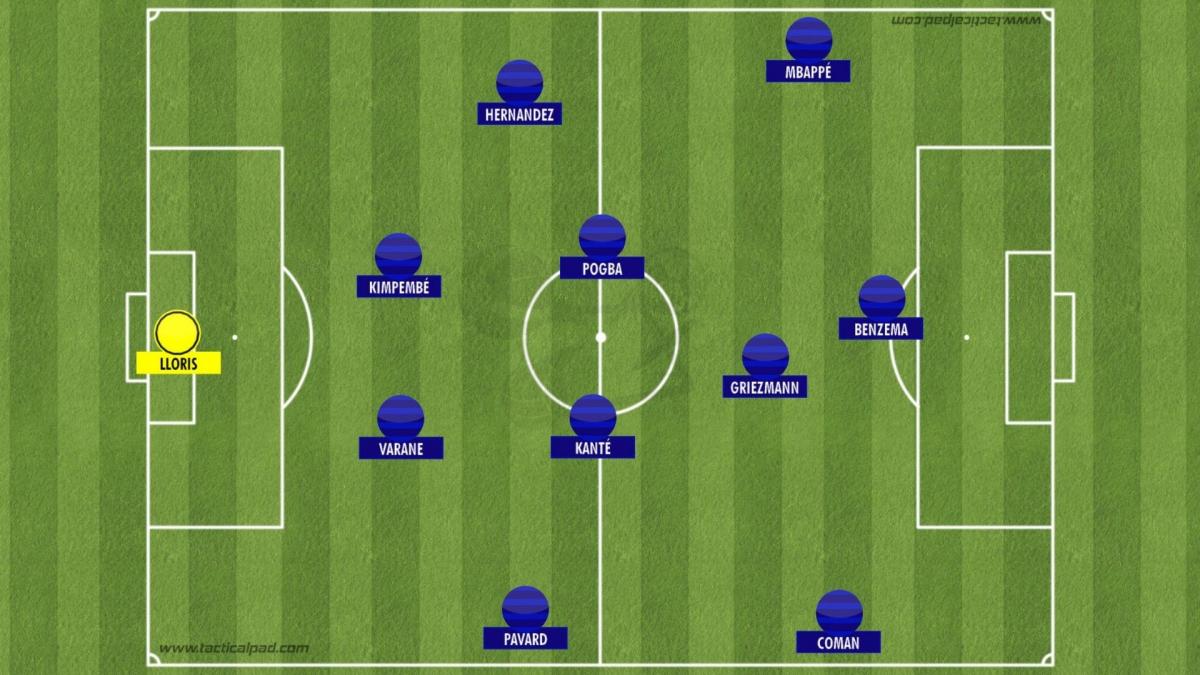 In this device, the animation would be different since Lucas Hernandez could be less offensive on the left to ensure the defensive balance theoretically lost with the absence of the third central midfielder (probably Rabiot). 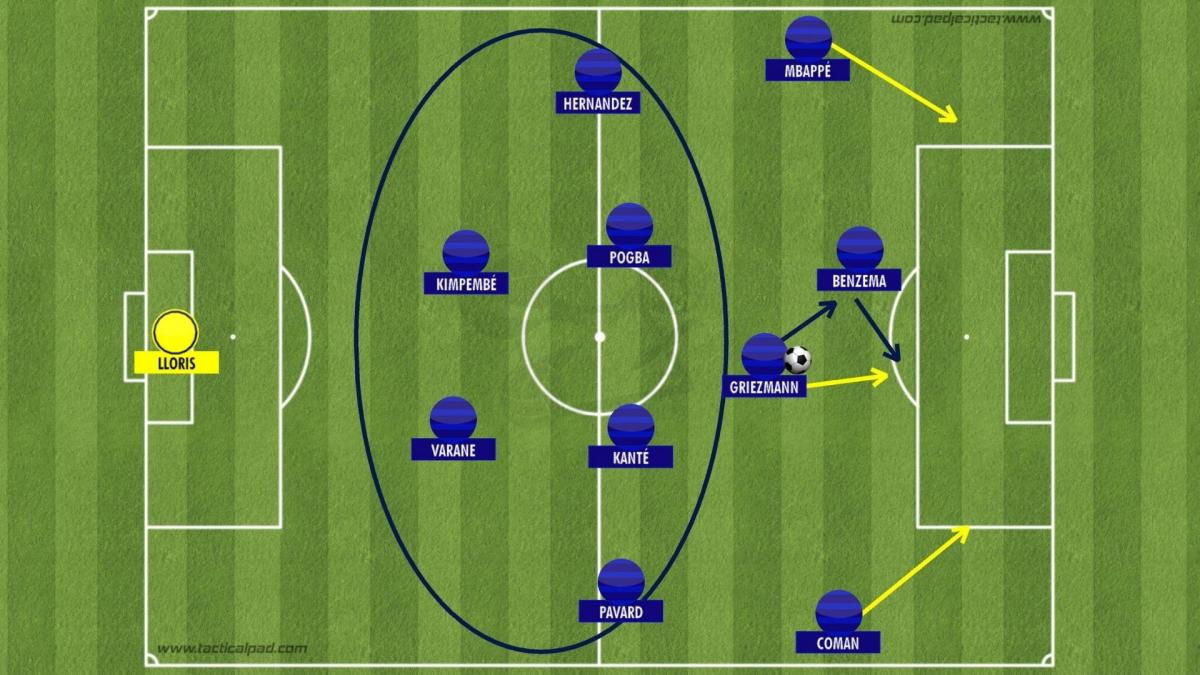 The possible animation of this system with always these combinations between Griezmann and Benzema in the heart of the game and the attack from depth by the wingers. Behind 6 players ensure the defensive transition

During an interview focused on tactics on Bein Sport, Didier Deschamps explained that a system with 4 attackers like this requires good organization without the ball and therefore special defensive work for the wingers.

However, Kylian Mbappé rarely finds himself in a position where he has to defend his lane (at PSG he tends to defend higher), but we can just imagine a different defensive organization with Griezmann with the 4 in the middle, Pogba on the left, and Mbappé in front to attack the depth in counterattack to solve this problem. It is a device that could be favored against a theoretically weaker team like Hungary, if they play in low blocks. 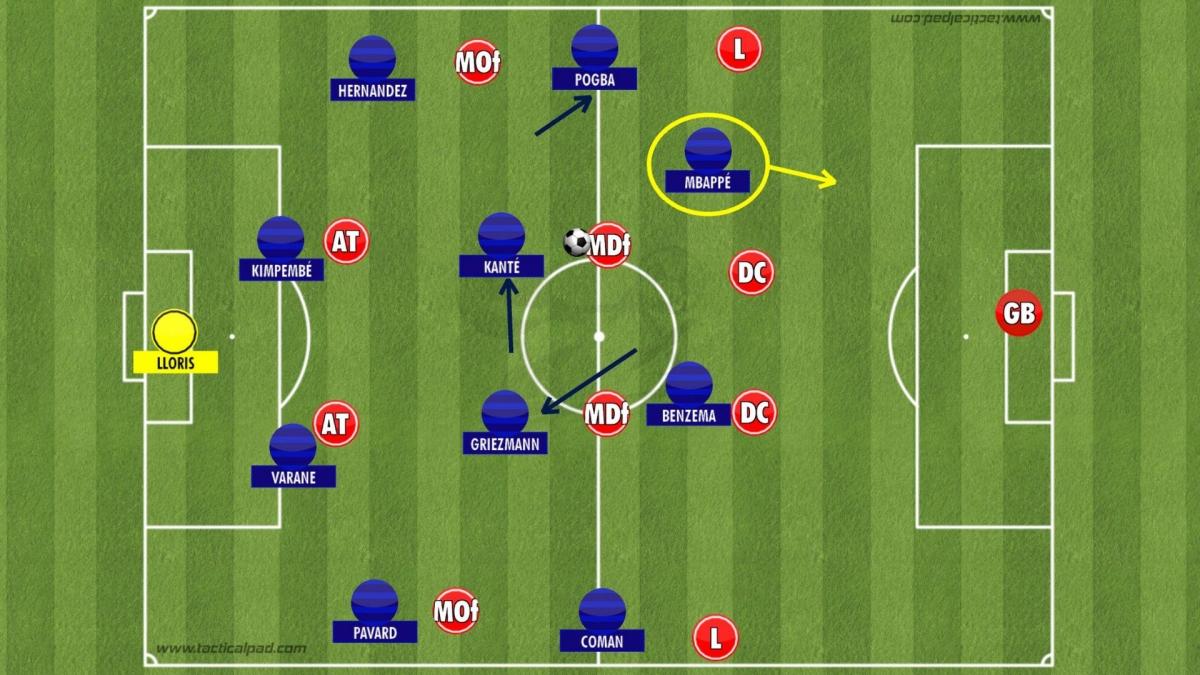 Another possible option, the 3-5-2 that Didier Deschamps also used over the past two years. This system would theoretically also be very offensive since it would allow to align Griezmann in 10 and to associate Karim Benzema with another center forward, who could be Mbappé or Oliver Giroud. 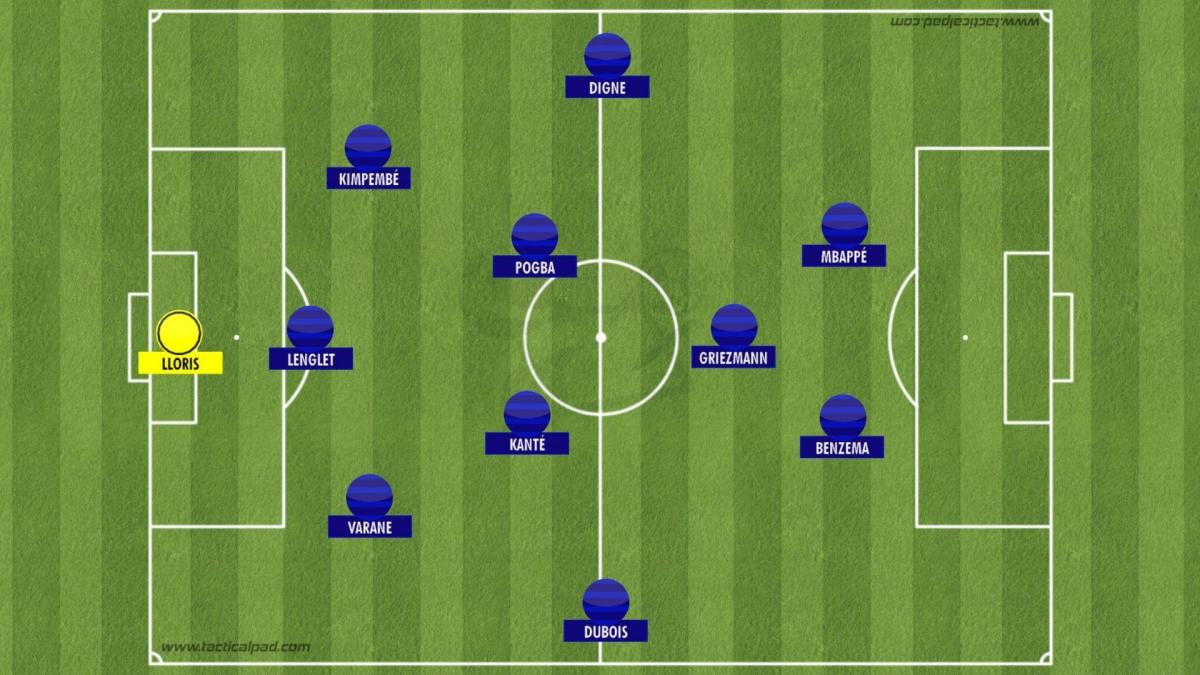 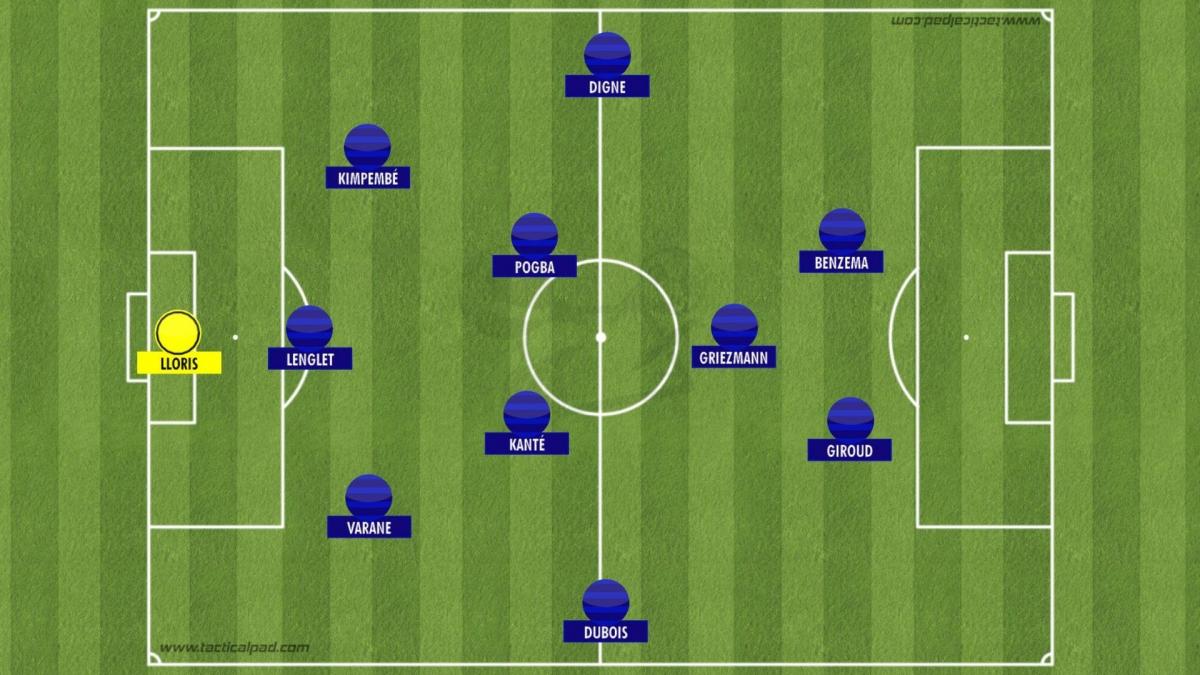 In this device, Karim Benzema would undoubtedly have less freedom and fewer opportunities to win so as not to encroach on Antoine Griezmann’s area of ​​influence. This option therefore seems less interesting on paper with Benzema, because it would limit it. It could be considered without him with a Mbappé-Giroud duo in front supported by Griezmann in 10. 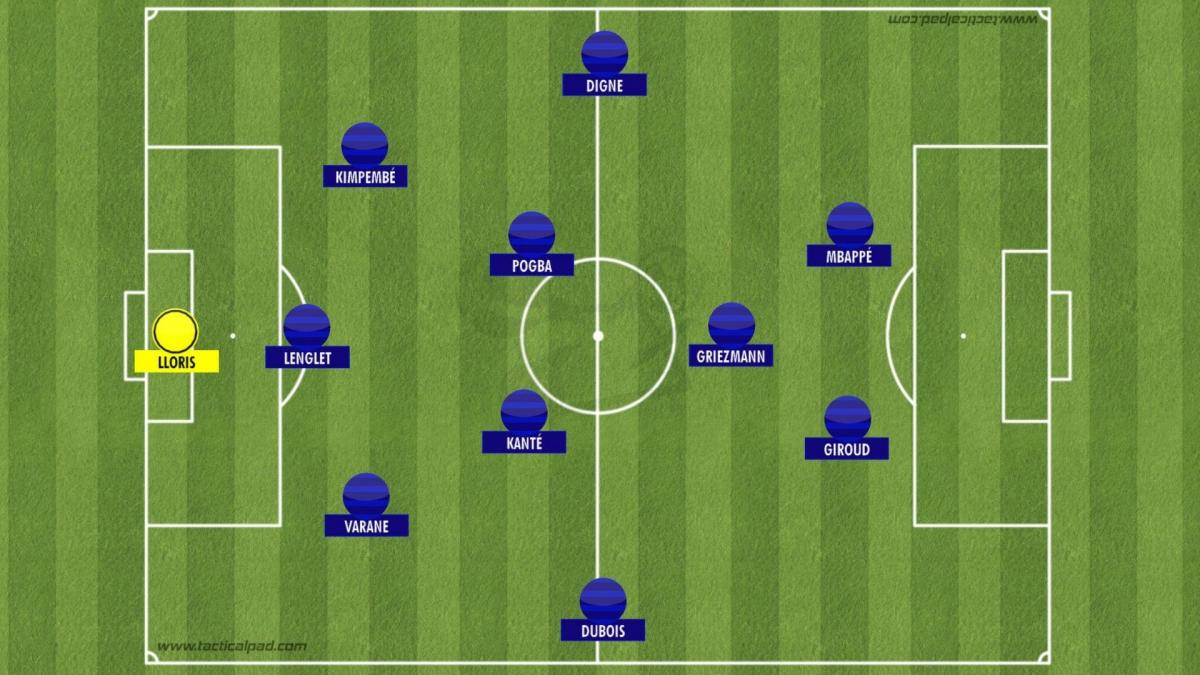 Another option, the 4-3-3 low point, but that would mean sacrificing Antoine Griezmann, who can no longer be aligned on one side today. It would still be a very interesting configuration for the Blues and for Karim Benzema who would evolve in a system that he knows very well at Real Madrid and in a position that he has been sublimating for several years now. Having Karim Benzema, in “false nine” with two very fast wingers and three recovering midfielders behind who have the ball also remains very attractive on paper, but you still have to dare to do without Antoine Griezmann. 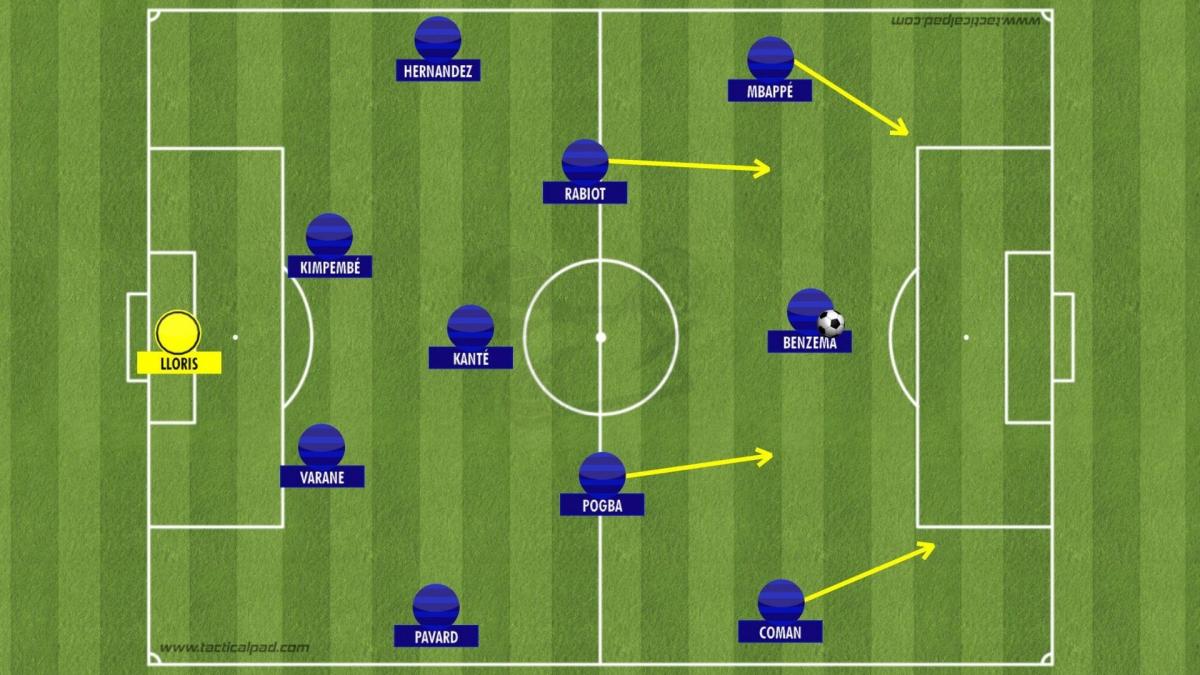 The 4-3-3 with Benzema, a very attractive option on paper

In any case, the presence of Karim Benzema offers a multitude of quality options to Didier Deschamps because the association of three offensive players of the quality of Griezmann, Benzema, Mbappé whose profiles are complementary and who speak the same football is incredible luck for a coach. So we can’t wait to find out on the field. It does not matter the configuration and the tactical device.

Arteta urges Aubameyang to bounce back from a disappointing season

Atlético wins at the end of the match against Osasuna and remains leader in front of Real Madrid, FC Barcelona loses against Celta and says goodbye to the title