Postponed for a year due to the coronavirus pandemic, Euro 2020 will take place from June 11 to July 11. The opportunity for us to present the jerseys of the 24 teams involved. After the first five groups, we continue with the last, Group F made up of France, Germany, Portugal and Hungary.

Equipped by Nike since 2010, while adidas was the historical sponsor of the Blues for more than 40 years, the France team signed a record amount during its contract extension with the comma brand in 2016. Nike pays 50 million euros per year to the FFF, the largest amount ever received for a national team at the time of signing.

Like the home jersey of the Blues at Euro 2012, this home jersey features horizontal stripes resembling a sailor top in a tone-on-tone effect since classic blue will blend with a navy blue background. Through the horizontal red stripe, we find a reference to the successes of 1984, 1998 and 2000 when the France team was equipped by adidas. There is also a touch of white on the Nike logo and the FFF emblem as well as on the two stars representing the two world championship titles of France.

The blue away jersey is intended to be uncluttered for this Euro 2020. We find an ultra sober white jersey without visible print where fine red and blue stripes stand out along the ribs, showing the tricolor flag. The Nike logo, the French Football Federation pennant and the flocking are navy blue on this unadorned French team away jersey.

The long love affair that began in 1978 is far from over between adidas and the Mannschaft who are linked until 2026 after having extended in 2018. As for France, the amount of the contract between the two parties would be around the 50 million euros.

Keeping the white structure of the home shirt, the three stripe brand added black horizontal stripes. The sleeves recreate the German flag through the superposition of black, red and yellow stripes, which is a first. The 4 stars, representing the 4 world championship titles of Germany, appear both above the coat of arms but also on the neck. The adidas logo and bands, the federation flag and flocking are black. 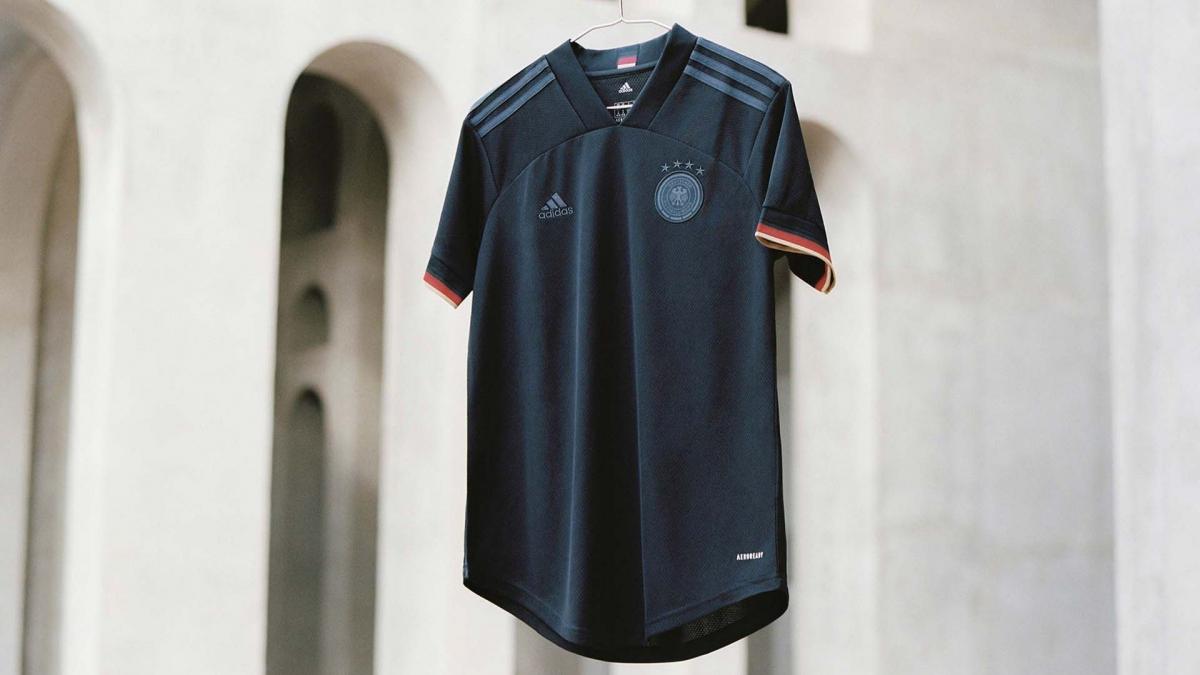 Unveiled in March 2021, we find now classic black on this Mannschaft away jersey. Where it differs from the latest black jerseys is that it is full black since the three adidas stripes and the logos are also black. On this tone-on-tone tunic, we find three superimposed bands in the colors of the German flag on the bottom of the sleeves.

The Portugal team has been equipped by Nike since 1997 and the advent of Cristiano Ronaldo in the mid-2000s only strengthened the link between these two entities. It was last September that Nike unveiled the jerseys that will be worn by the Seleção during Euro 2020.

The cut and polo collar with two buttons stand out on this classic Portuguese red jersey. This tunic focuses on simplicity and elegance with the addition of a touch of gold on the Nike logo. We also find black and green on the edges of the sleeves but also along the ribs with these zigzag bands. The other novelty is the return of green shorts to complete Portugal’s home outfit, which had not been seen since Euro 2004. We will also note the presence of a golden “P” on the side. inside the jersey. 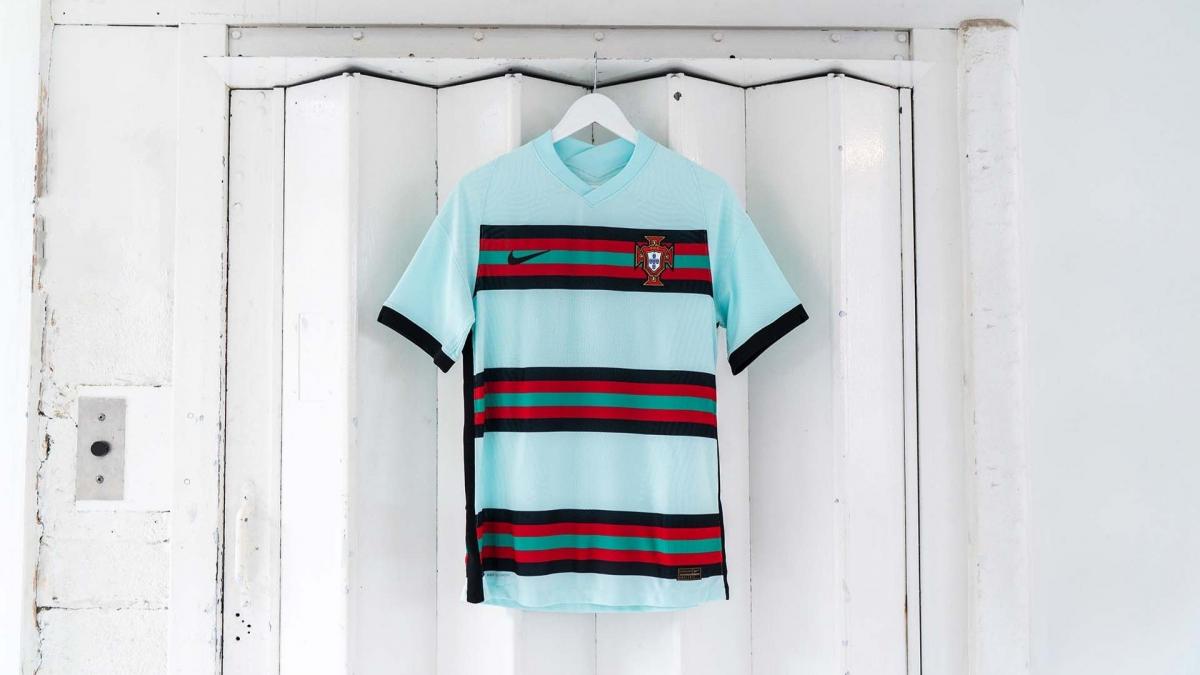 The away jersey is more original with a sea green background inspired by the Euro 2016 outer tunic. There are also three broad bands with black, red and dark green stripes, which recall the colors of the Portuguese Federation pennant. of football. The bottom band goes all the way around the jersey while there is black on the bottom of the sleeves but also along the ribs.

Equipped by adidas since 1994, Hungary particularly stood out in the last Euro by reaching the round of 16. This summer, Marco Rossi’s men will have the chance to play the first two matches of their group at the Ferenc-Puskás Stadium, the opportunity for the German equipment manufacturer to pay tribute to the Hungarian capital through its home jerseys. 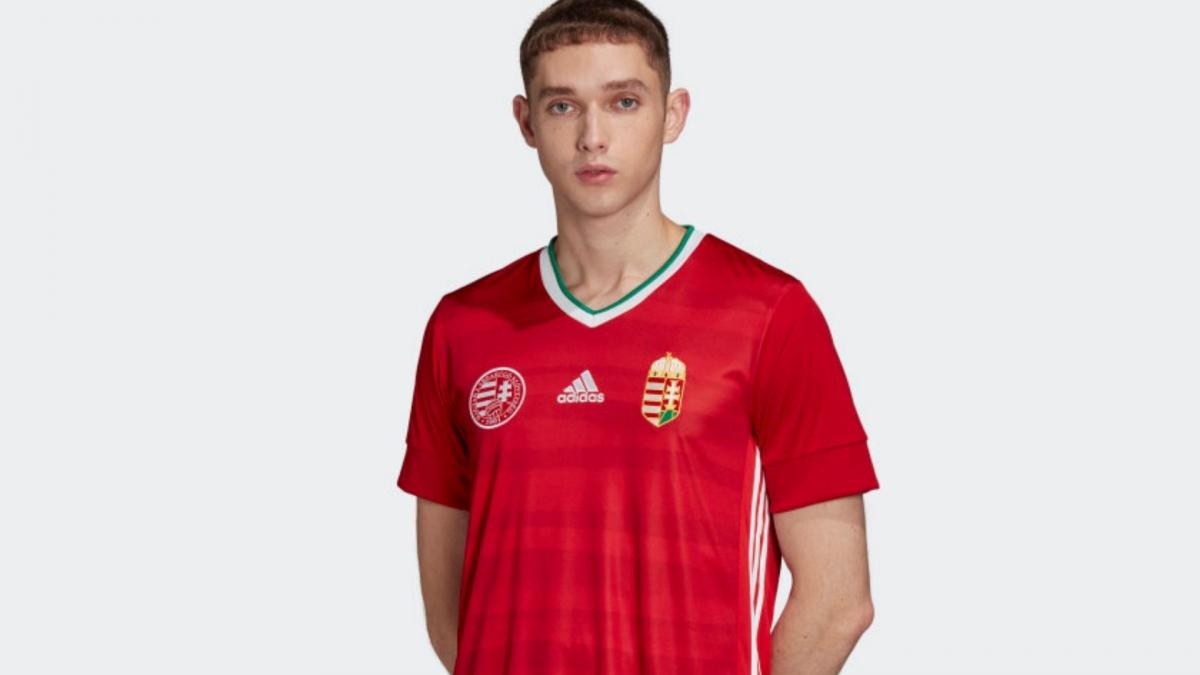 On this tunic, we therefore find traces of Budapest with a design inspired by the Danube river on this red base. The white and green V-neck complements the flag colors. The Hungarian Football Federation crest and the Hungarian crest, adopted after the fall of the communist regime in 1990, are featured while the adidas logo is in the center of the shirt.

Unveiled last March, the away jersey is in the colors of the Hungarian flag with a white background, the adidas logos and stripes in red and finally green that starts at the end of the sleeves and runs down the length of the sides. No big surprise for the new tunic from Hungary which therefore remains in the tradition of the latest away jerseys.

Hostilities will begin on June 15 in Group E where Hungary will host Portugal while a clash between Germany and France will take place at the Allianz Arena. You can find the jerseys of the teams qualified for Euro 2020 on Foot.fr !

The history of PUMA at the European Championship