Analysis: How Chelsea dominated Real Madrid in midfield….and everywhere else

After their 1-1 first leg standoff, Chelsea and Real Madrid faced each other once again, this time to decide the second UEFA Champions League final spot for good.

The Blues had certainly been the better side in the first leg, but they squandered a fair few chances and failed to take control of the tie. Los Blancos undoubtedly needed to change things tactically for this match, though they were also set to be helped by a number of players returning from injury including captain Sergio Ramos and left-back Ferland Mendy.

Following another dominant performance, Chelsea emerged 2-0 victors despite failing to take a number of chances once again. In this analysis, we will take a look at how Thomas Tuchel’s side defeated the second Madrid-based club in their Champions League knockout stage campaign.

Although Real Madrid had over two-thirds of the ball with 67.7% possession, they did very little with it.

Around the edge of their box, they transitioned from a back-three to a back-four in front of Thibaut Courtois to build their moves. Éder Militão moved out to the right with Nacho on the left, while one midfielder (usually Casemiro but Toni Kroos as well on occasion) dropped into the left centre-back position alongside Ramos. 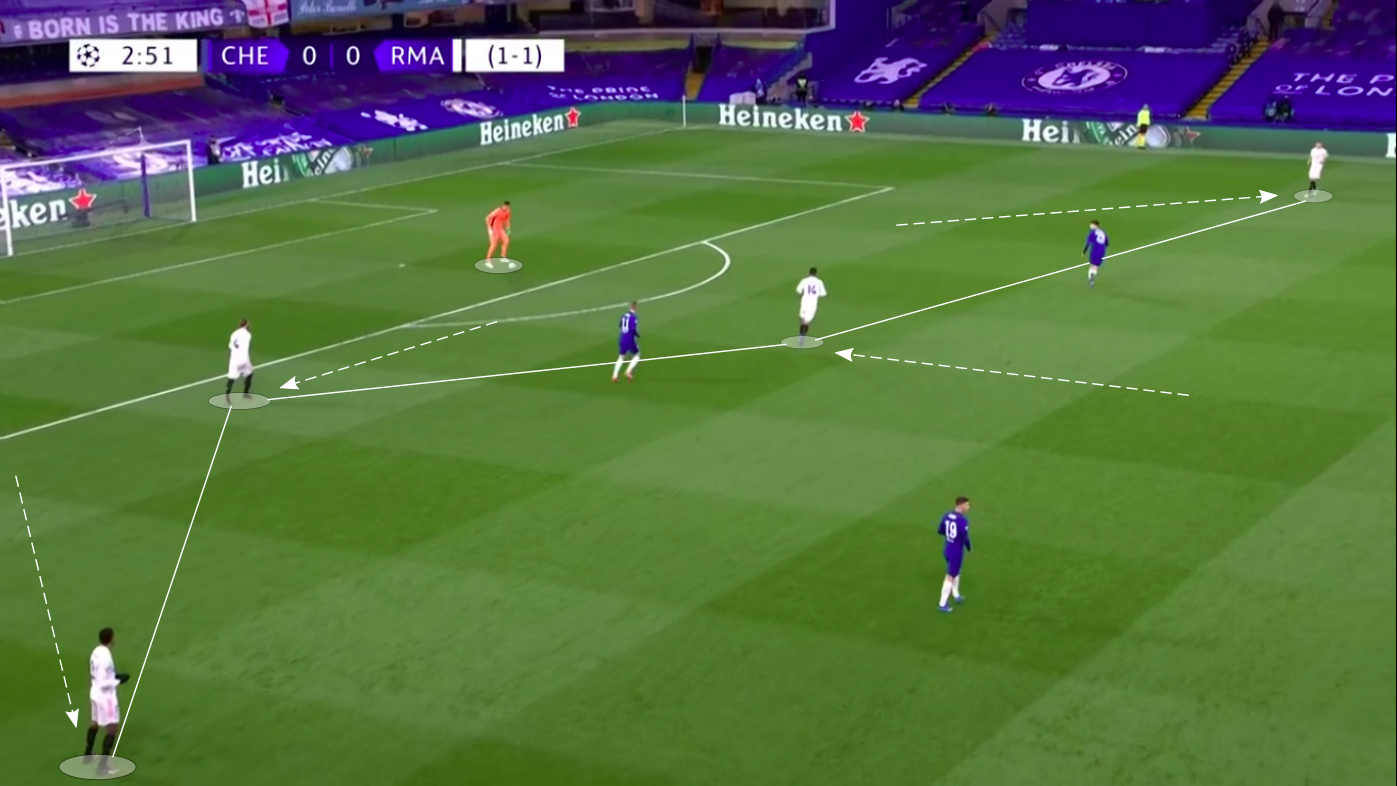 In the build-up phase, Luka Modrić (who was playing a sort of a number 10 role while the other two midfielders stayed back in a double pivot) and Eden Hazard often dropped back into midfield to provide a ball progression option. 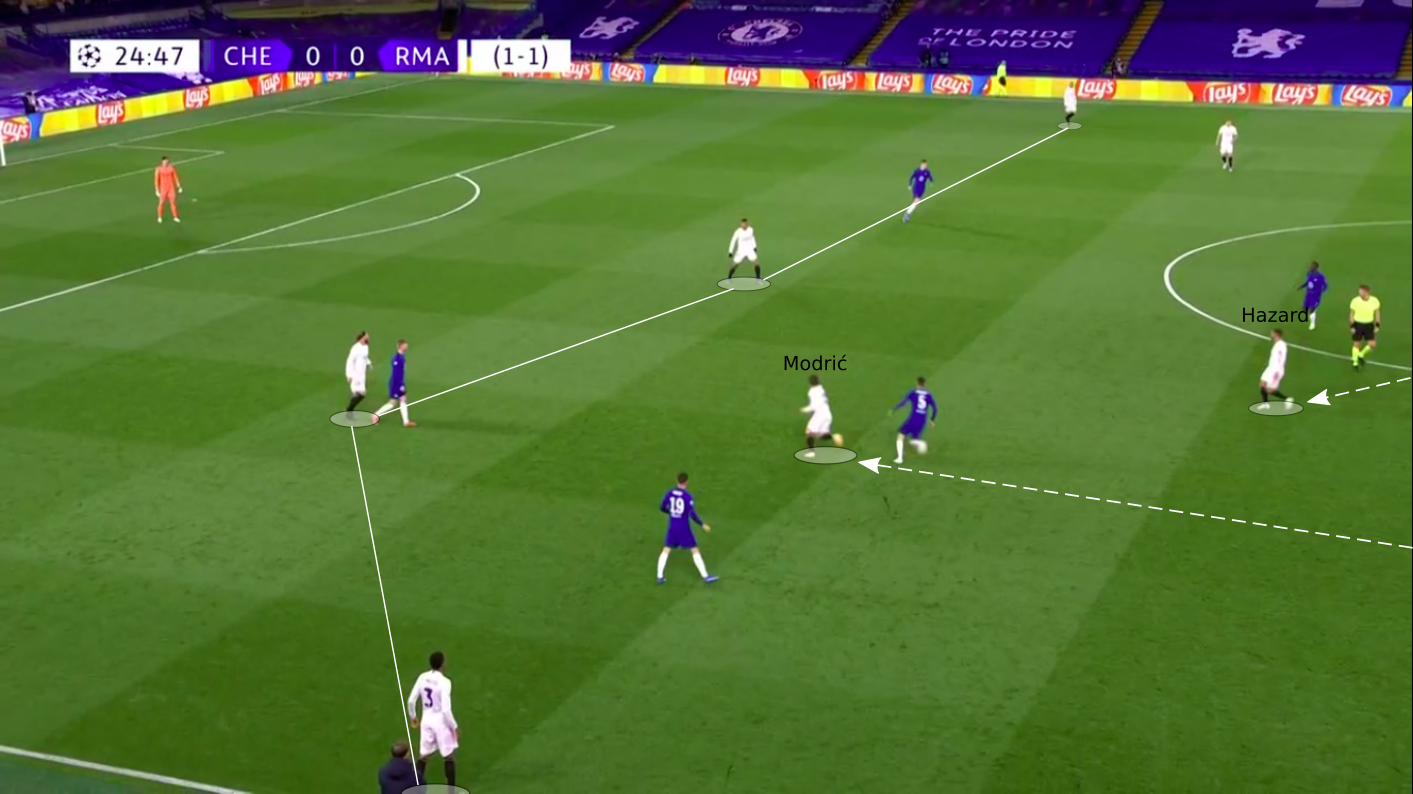 Further forward, the man who did not drop into the back line between Casemiro and Kroos looked to stay in between the Chelsea attack and midfield, while Modrić had the freedom to get forward on the right as both Hazard and Karim Benzema stayed quite central. This one-man midfield not only proved to be little difficult in terms of ball progression (which is why the attackers had to drop back), but it would also prove to severely hurt them in transition. 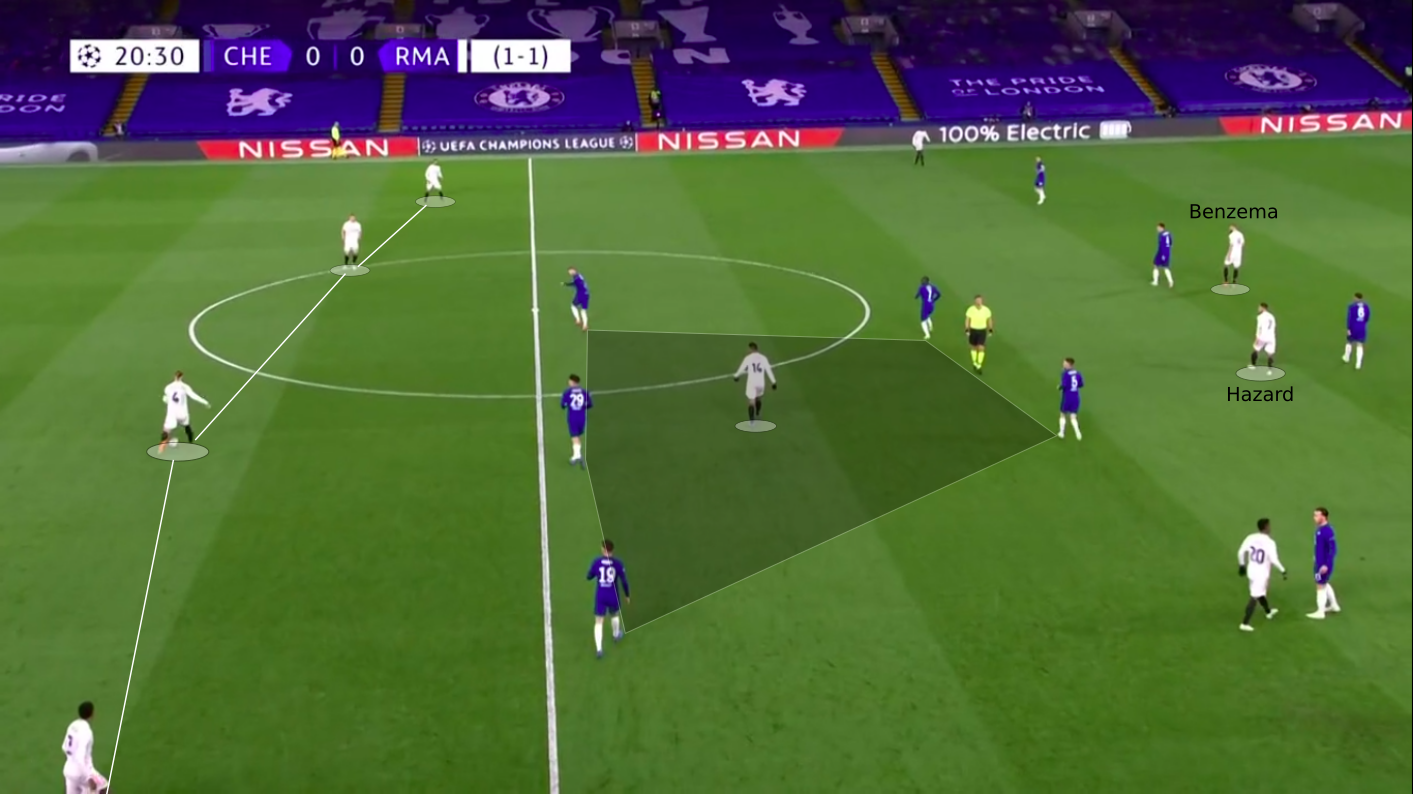 To summarise, Real Madrid had an easy job of keeping possession around the defence, but getting forward proved to be quite tricky. The frontmen had next to no joy, as Benzema and Hazard failed to link up for a single shot, while five of the visitors’ seven attempts came from outside the box.

Chelsea never really had to dig deep and defend in this match, and that was partly due to how successful their shape was from the very front.

When Real Madrid had possession in their own half, Chelsea’s defensive shape was a 5-2-3 with the wing-backs dropping off and the wide attackers joining Timo Werner up front. They were quite happy to let them have the ball and usually did not press the two central players in Real Madrid’s back-four when they had possession, instead focusing on cutting passing lanes off and preventing any passes into midfield. 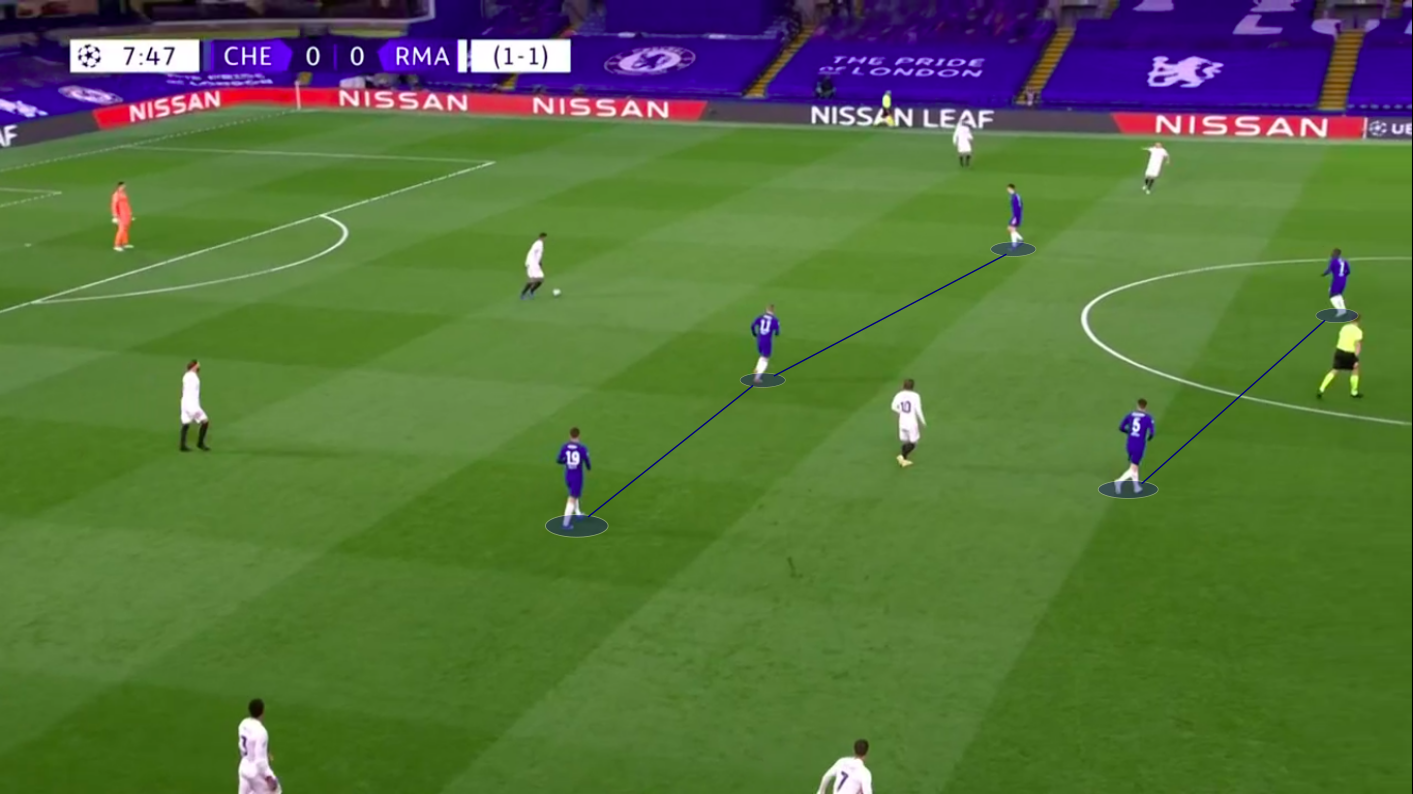 They did, however, press the two wide centre-backs if they received the ball, looking to prevent them from progressing the ball. 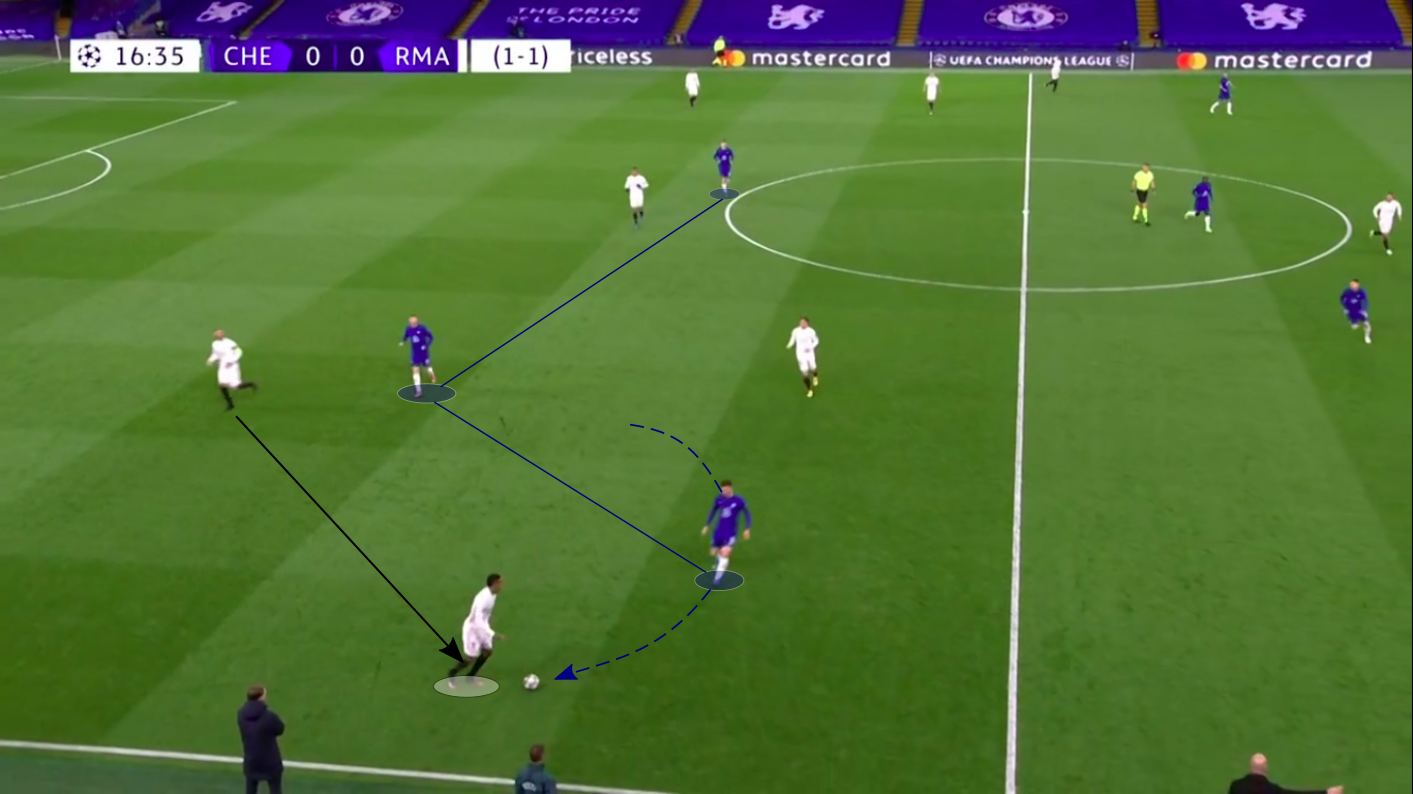 The wing-backs pushed forward to press their Real Madrid counterparts (who usually stayed quite high) if they dropped back. In most cases, this was Ben Chilwell pressing Vinícius Júnior since Ferland Mendy usually stayed forward and managed only eight touches in his defensive third. 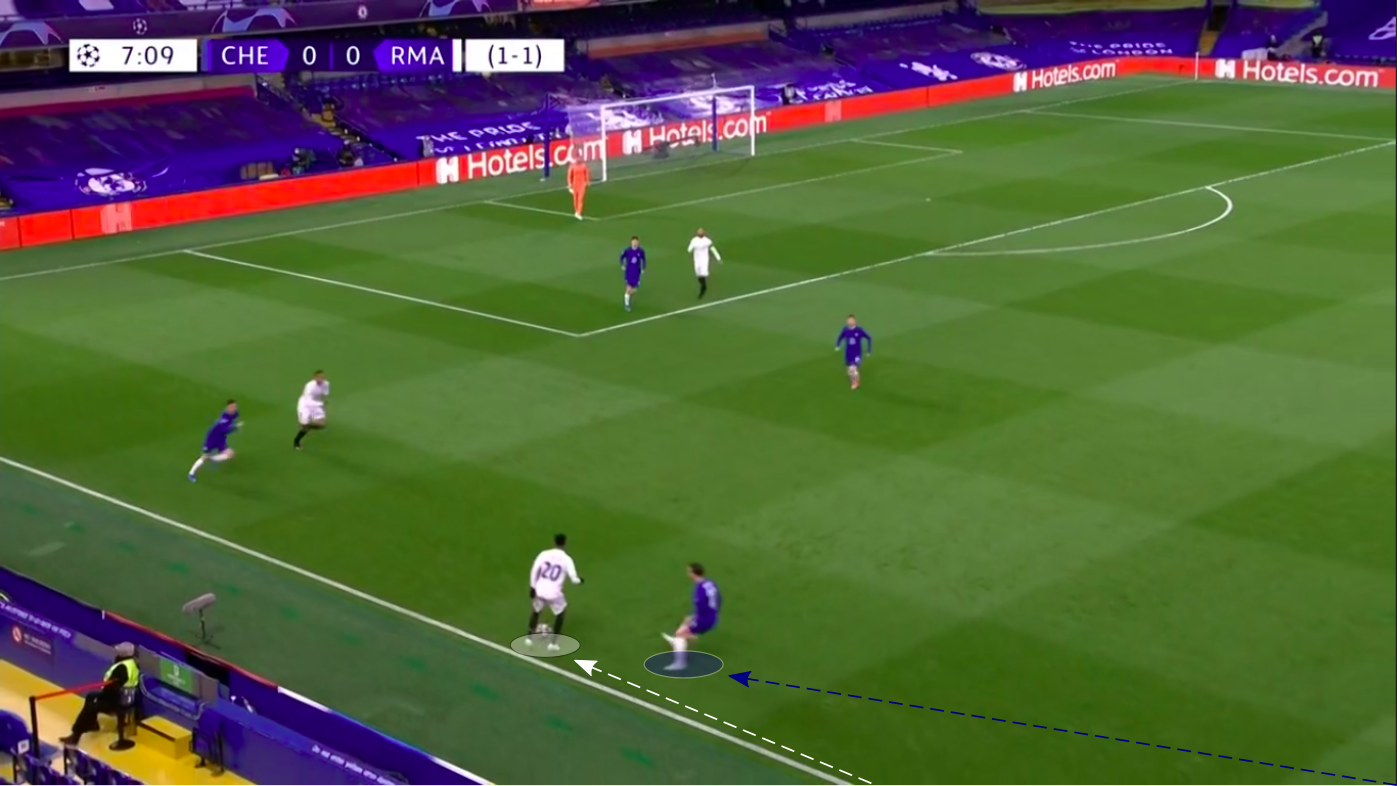 When in their own half, Chelsea transitioned to a 5-3-2 as Mason Mount dropped back to join the midfield. 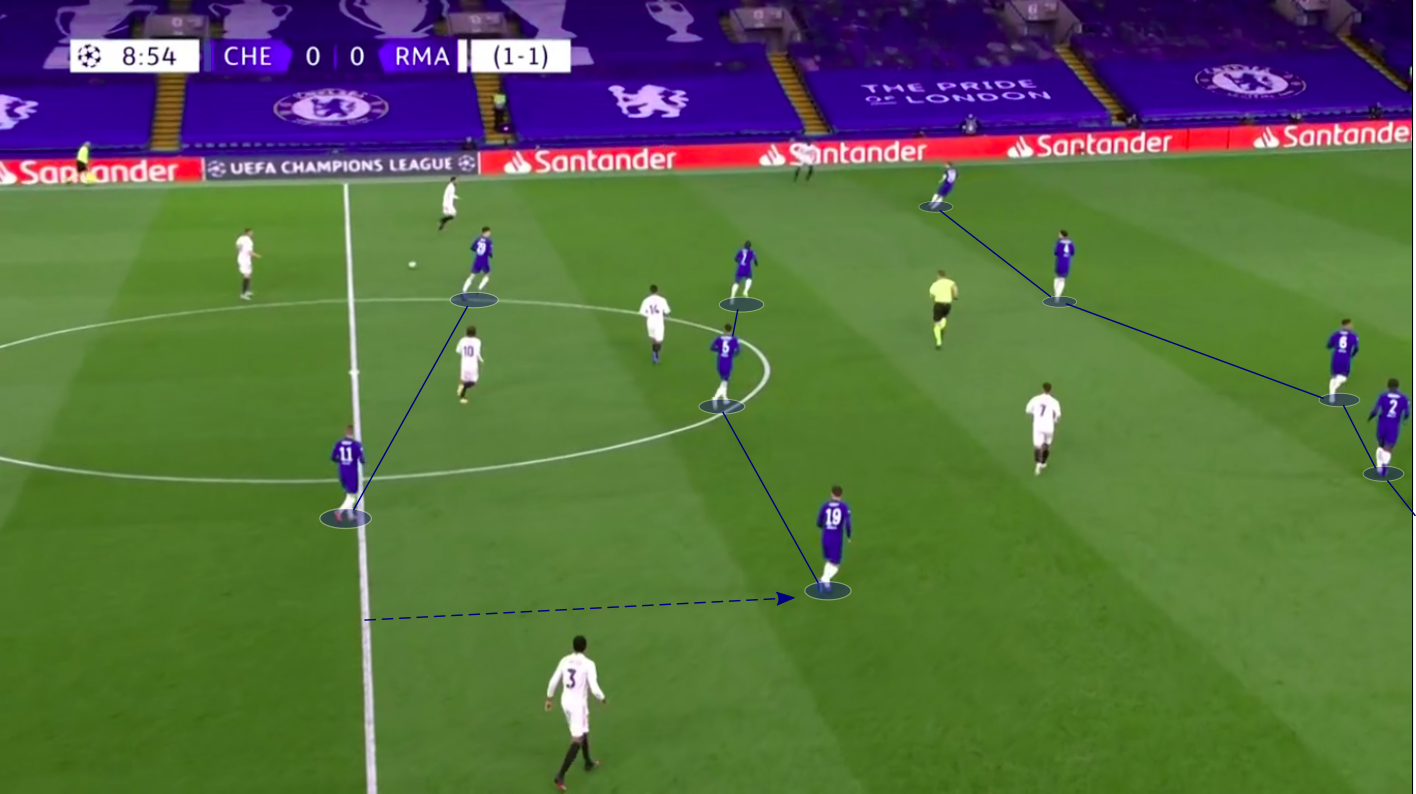 This defensive tactic proved to be quite successful as Real Madrid barely had any space or time on the ball in the middle of the park. In the rare instances when they did get there, though, they were stifled by the imperious Jorginho and N’Golo Kanté. 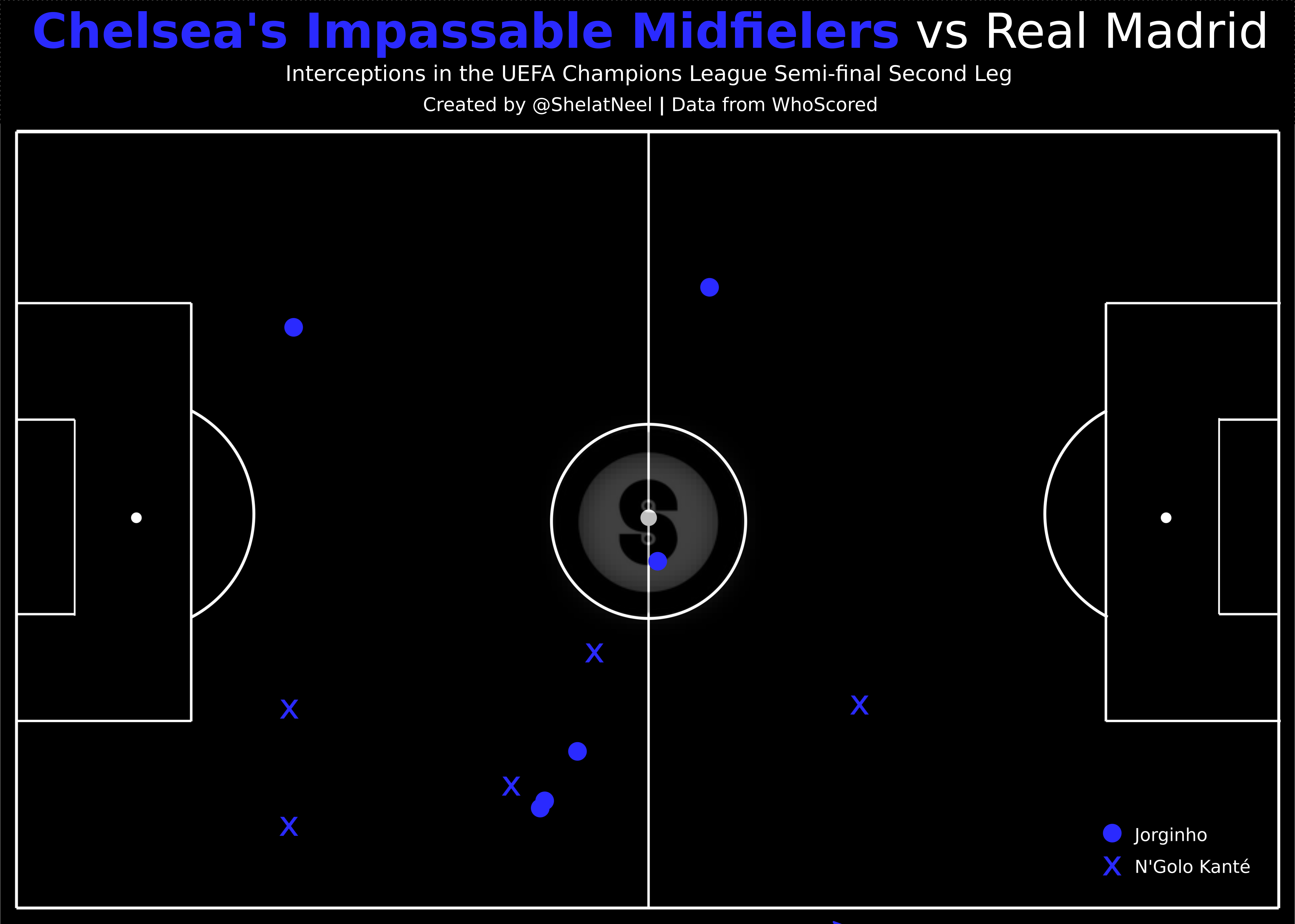 Just as they did in the first leg, Chelsea looked most dangerous when they powered forward quickly after turning the ball over.

As we saw in the visualisation, their midfielders did so quite often, so Chelsea strung together a number of good attacks in transition. Their first one very nearly yielded a goal, and it started with Jorginho intercepting a pass. Kanté picked the loose ball up and quickly found Mount, who helped it on to Chilwell (who had acres of space as the ball was quickly shifted from the right side of the pitch to the left, rather without opposition too as Real Madrid’s midfield was left terribly depleted in such situations as it often only included one man) with two touches. 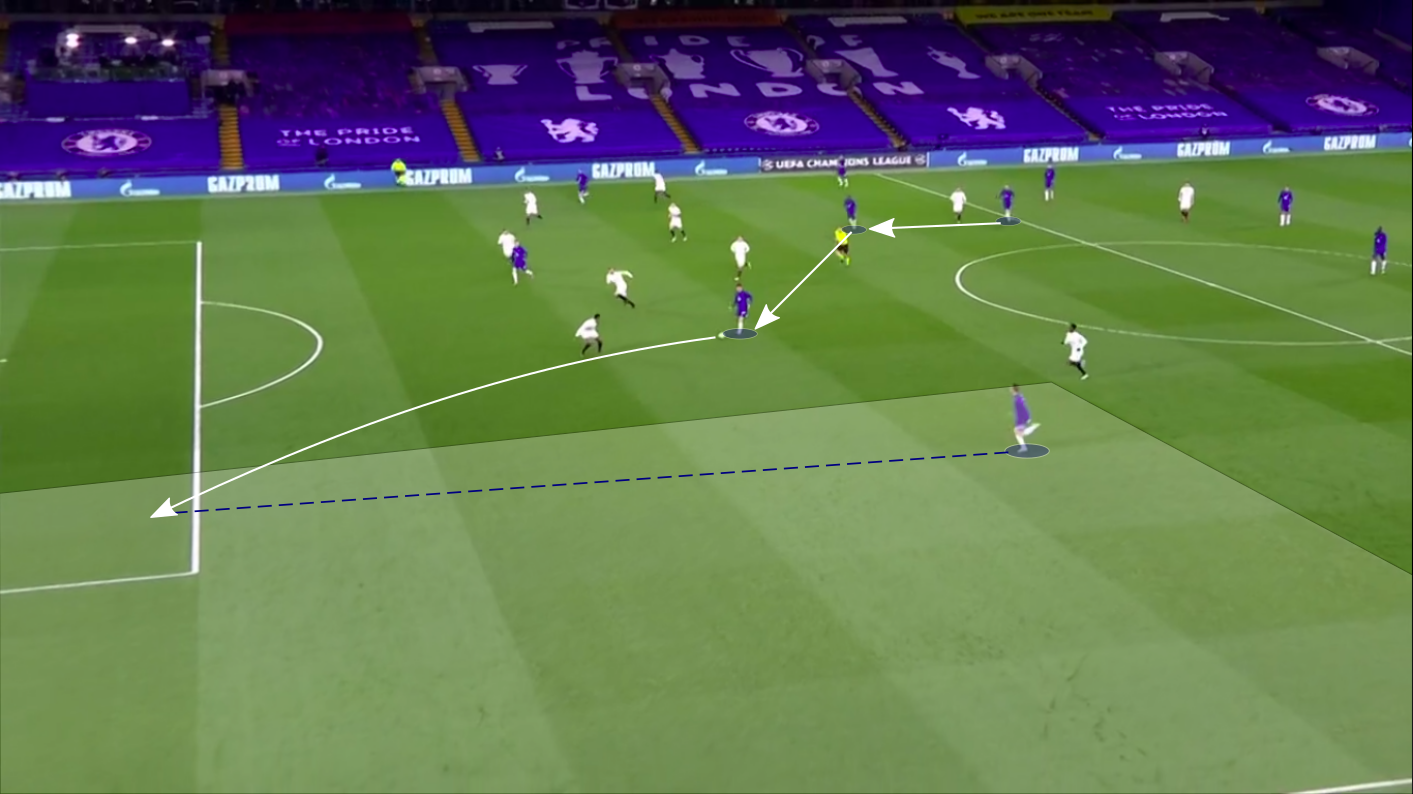 It all worked perfectly – apart from the fact that Werner was offside, so the goal did not stand. 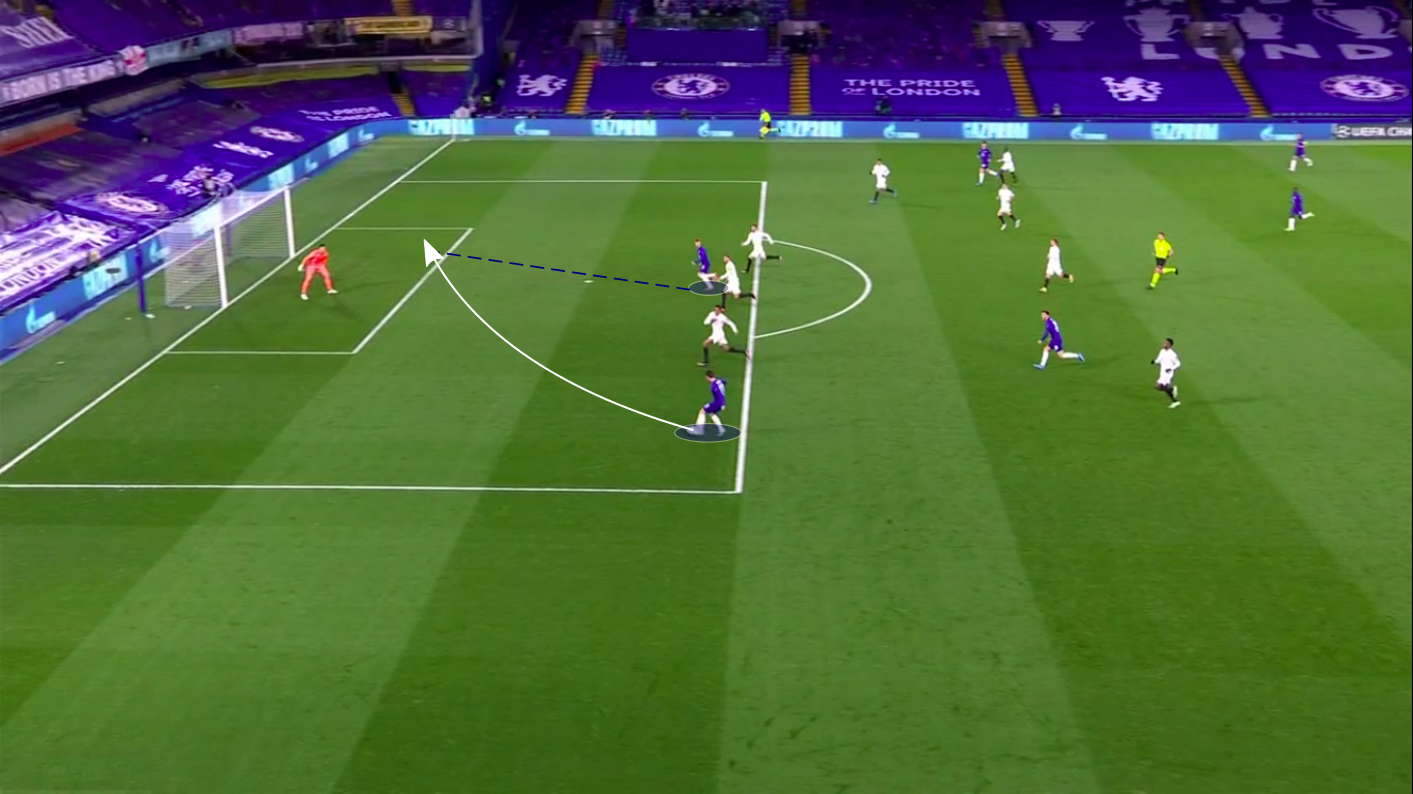 Although Chelsea’s opening goal was not a result of a quick transition, it certainly depicted how poor Real Madrid’s midfield was even when the players were in their defensive positions. Kanté received the ball from a centre-back with his back to goal, and he quite literally breezed past the duo of Casemiro and Kroos with two simple touches. 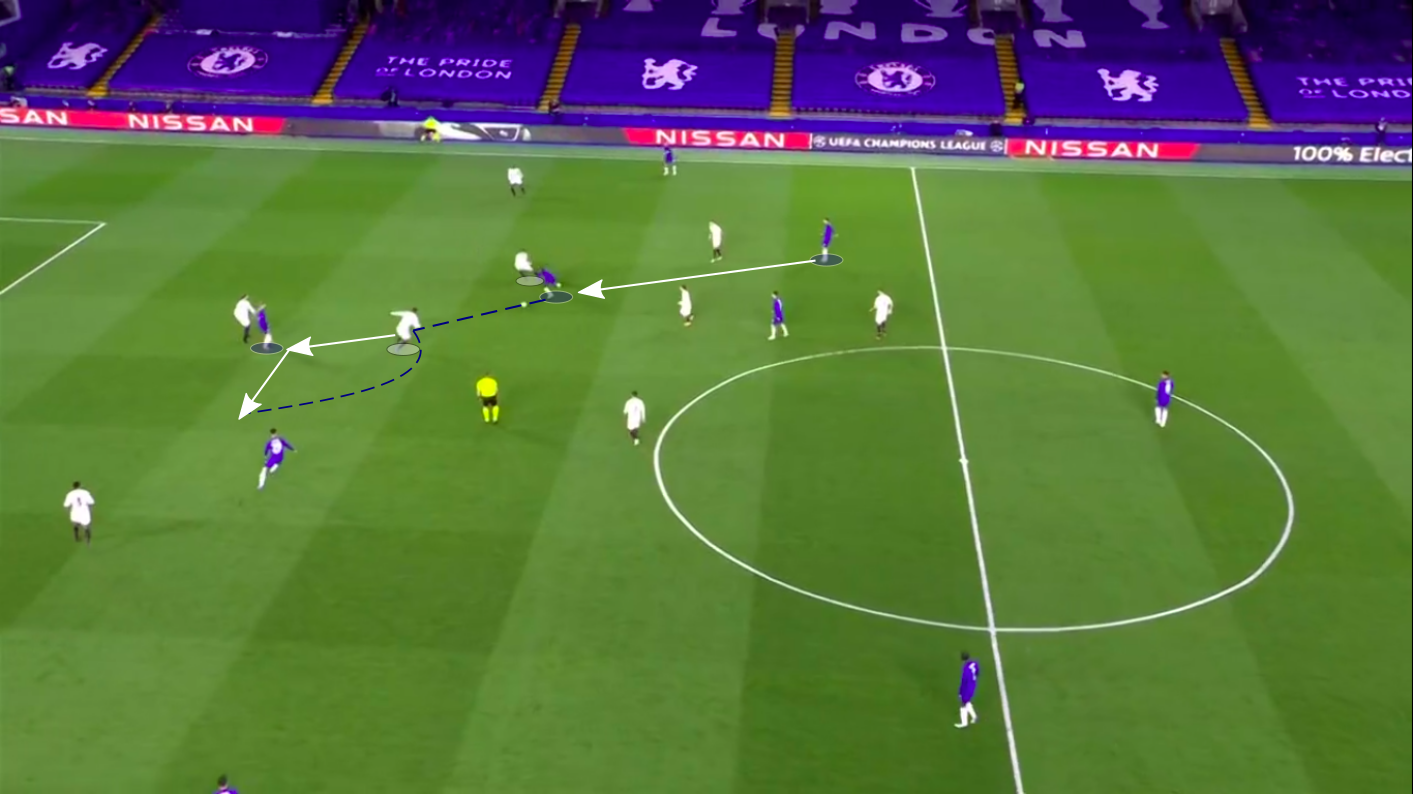 With the defence exposed, Real could do little to prevent Chelsea from encroaching up to the edge of the box, from where Kanté finally released a pass to Kai Havertz. 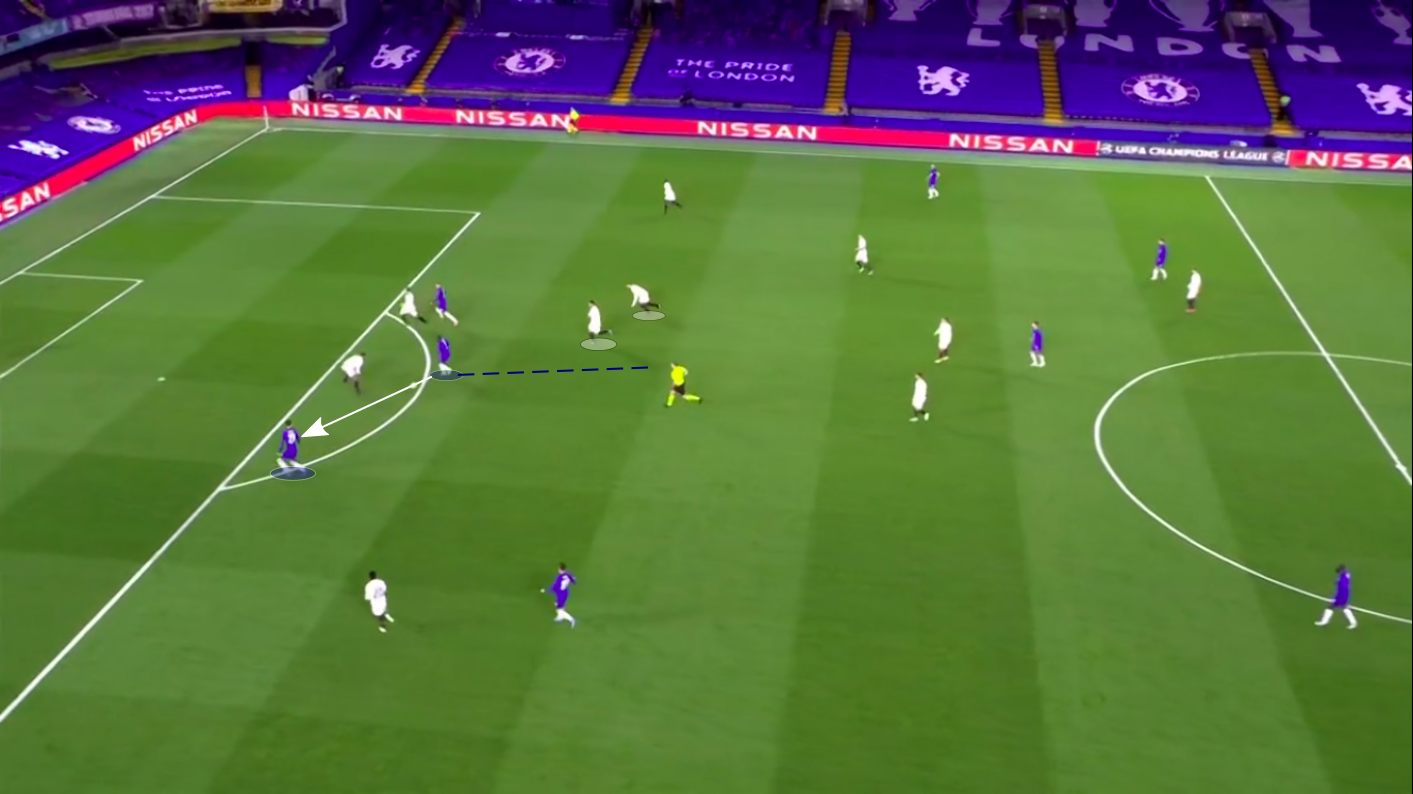 Although the ex-Leverkusen forward’s shot came back out of the crossbar, Werner was at hand to head the rebound home with the keeper and defence nowhere to be seen.

The other problem that Real Madrid faced in transition was in their back line. That was most evident in the 59th minute after Chelsea turned the ball over in midfield, and after four quick touches, sent a long ball up the pitch through Jorginho. 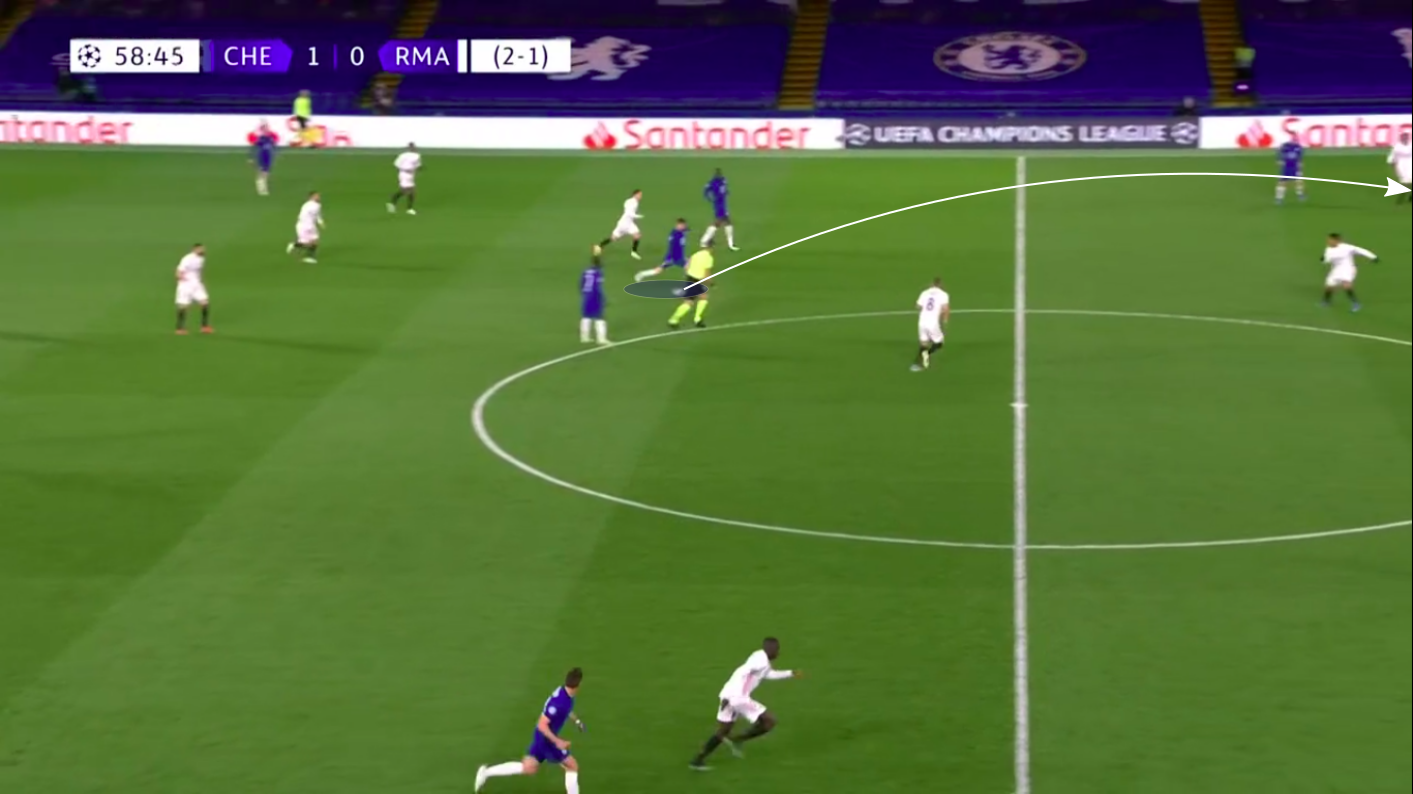 The issue from the visitors’ perspective was that their back-three were too far apart in possession as the wide centre-backs split all the way to the touchlines, so they were exposed centrally. In this case, both Havertz and Werner raced through on goal unopposed, but the former’s finish was saved by Courtois. 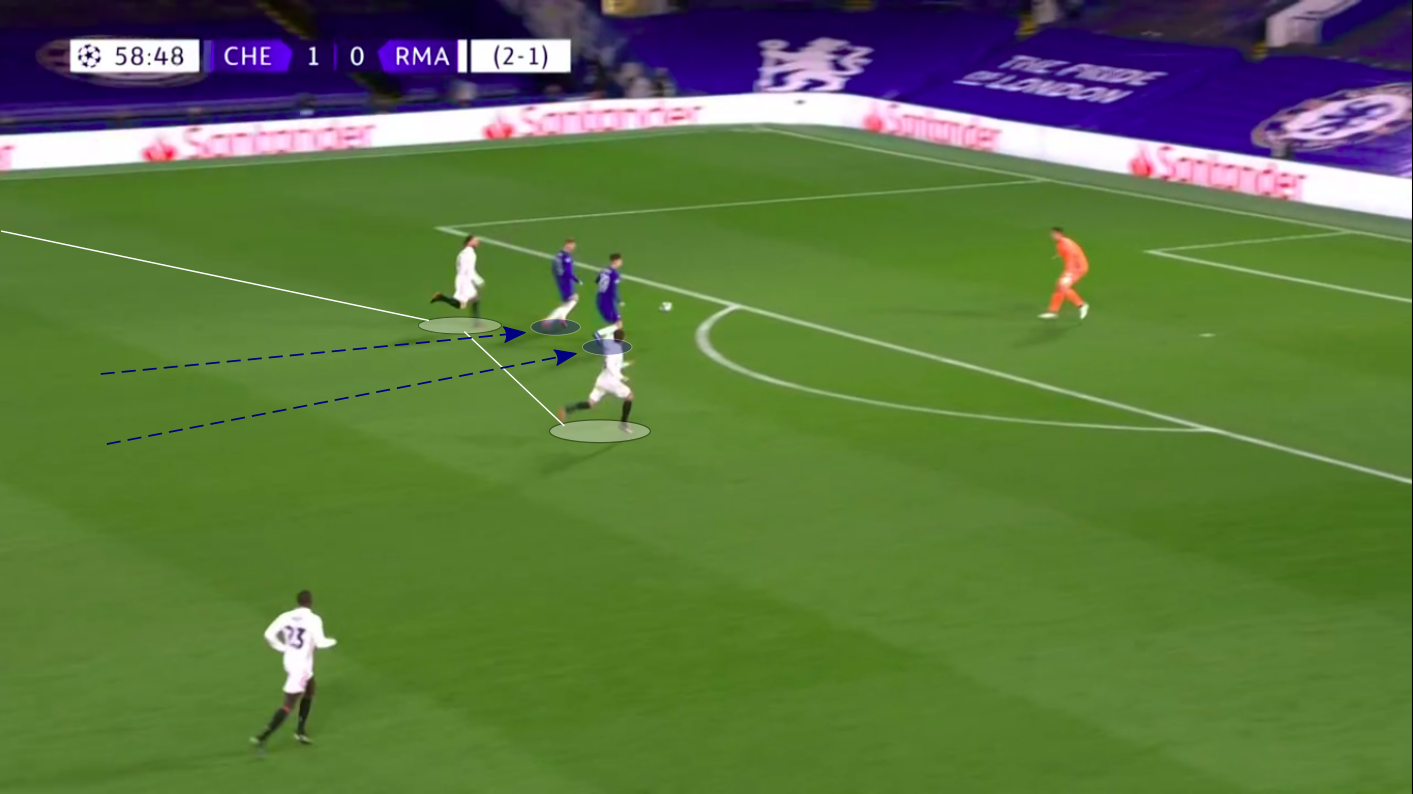 Even though they escaped here, Real Madrid were eventually punished for a second time in the 85th minute. That goal originated from a Chelsea goal-kick, but once again it featured some really sloppy work in the midfield (which then even lacked Casemiro as he was substituted off) and disastrous defending by the back line.

Although they should have added a couple of goals to their tally just as they could have in the first leg, Chelsea came away with a comfortable victory this time around. They were set up perfectly to hurt their opponents, and the players executed the plan brilliantly.

From a Real Madrid viewpoint, this was a very similar performance to the first leg minus a Benzema overhead kick, which is why they certainly deserved to get knocked out. Zinedine Zidane has really improved his tactical adaptability this year, but his decision to stick to a back-three on this occasion probably wasn’t the correct one. They cannot afford to dwell over this defeat, though, as the La Liga title race continues to heat up.

Chelsea, on the other hand, have set up a final date in Istanbul with Manchester City, meaning that Tuchel has already taken his side to a couple of cup finals in just his first year in charge, so his appointment is proving to be more than successful.

The Blues face Pep Guardiola’s side this weekend in the Premier League, so that fixture just got spicier to add to the fact that Chelsea need a win to maintain their gap in the top-four while City can seal the title for good with three points.