After a hard-fought 1-1 draw between Real Madrid and Chelsea, the UEFA Champions League served up another semi-final feast, as Paris Saint-Germain hosted Manchester City at the Parc de Princes.

The home side was certainly in the mood in this season’s Champions League, having knocked out Barcelona in the Round of 16 and exacting their revenge over holders Bayern Munich in the following round. Naturally, last season’s final disappointment was not forgotten in Paris, and an instant redemption would be the best way to heal that wound.

Manchester City, on the other hand, are arguably been the best team in Europe this season – unquestionably after the turn of the year – so anything short of a Champions League success would be considered a small failure at the very least. Pep Guardiola had received a fair amount of criticism for his inability to take the Mancunian side beyond the quarter-finals in four attempts, so this was a huge chance for him too as adding Europe’s most coveted trophy to the vast cabinet lying somewhere in the Etihad Stadium complex would irrefutably make his City side one of the best ever.

Paris Saint-Germain got off to a great start and even took the lead within 15 minutes, but they fell to a second-half comeback from the visitors which saw the match end with the scoreboard reading 1-2. In this analysis, we will break down the key tactical aspects of this huge Champions League tie.

Although Manchester City have been fairly adept at defending set-pieces this season, they looked quite shaky against Paris Saint-Germain. 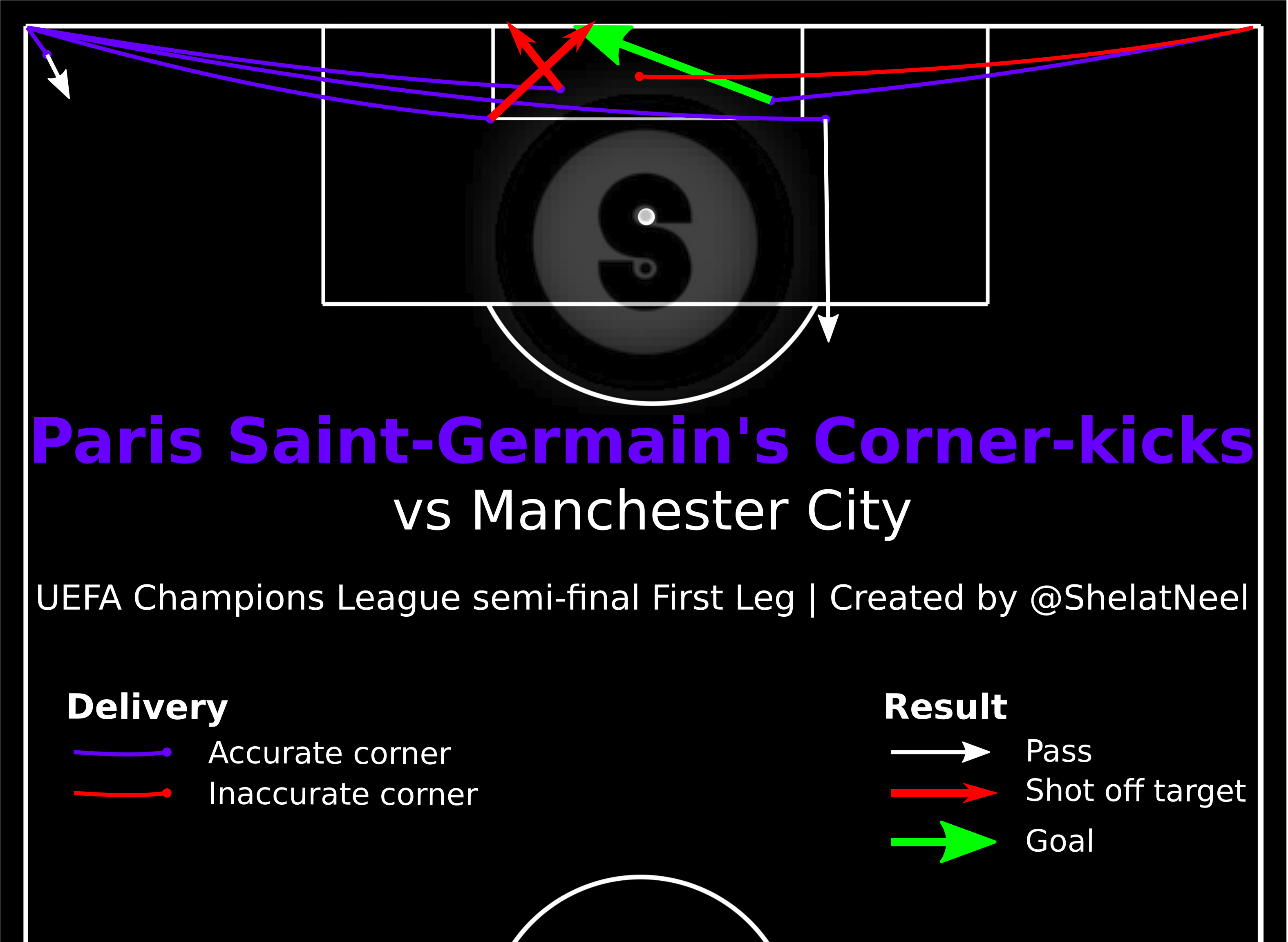 As this visualisation indicates, PSG had a fair amount of success from their six corner-kicks. Five of those were delivered into the box, with each of them landing in and around the six-yard box, and three of those resulting in an attempt at goal, while one had to be punched away by Ederson. Evidently, near-post deliveries gave them the most joy.

To understand why that was the case, let us try and understand PSG’s corner routines first: 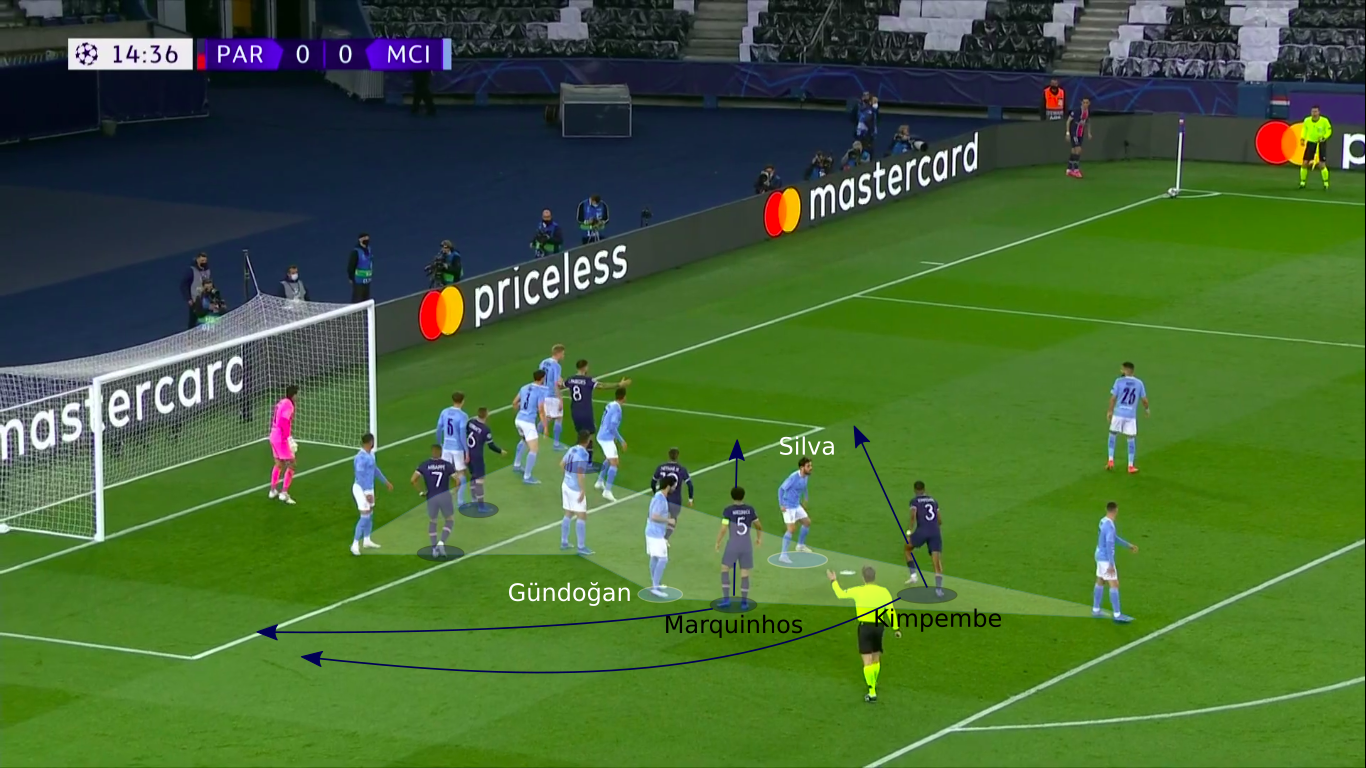 Their plan was quite simple – they used three of their least aerially dangerous men including Marco Verratti and Leandro Paredes to congest the six-yard box, where Manchester City had five outfielders including their complete back-four. Just outside, the other set-piece-taker (Neymar/Ángel Di María) waited to further attract City’s defenders around the six-yard area.

This served to take the spotlight away from the real dangermen – Marquinhos and Presnel Kimpembe, who hovered around the penalty spot. Their markers – İlkay Gündoğan and Bernardo Silva – were certainly outmatched, and with City standing quite narrow horizontally, the two PSG centre-backs were free to make a run to either the front-post or the back-post. 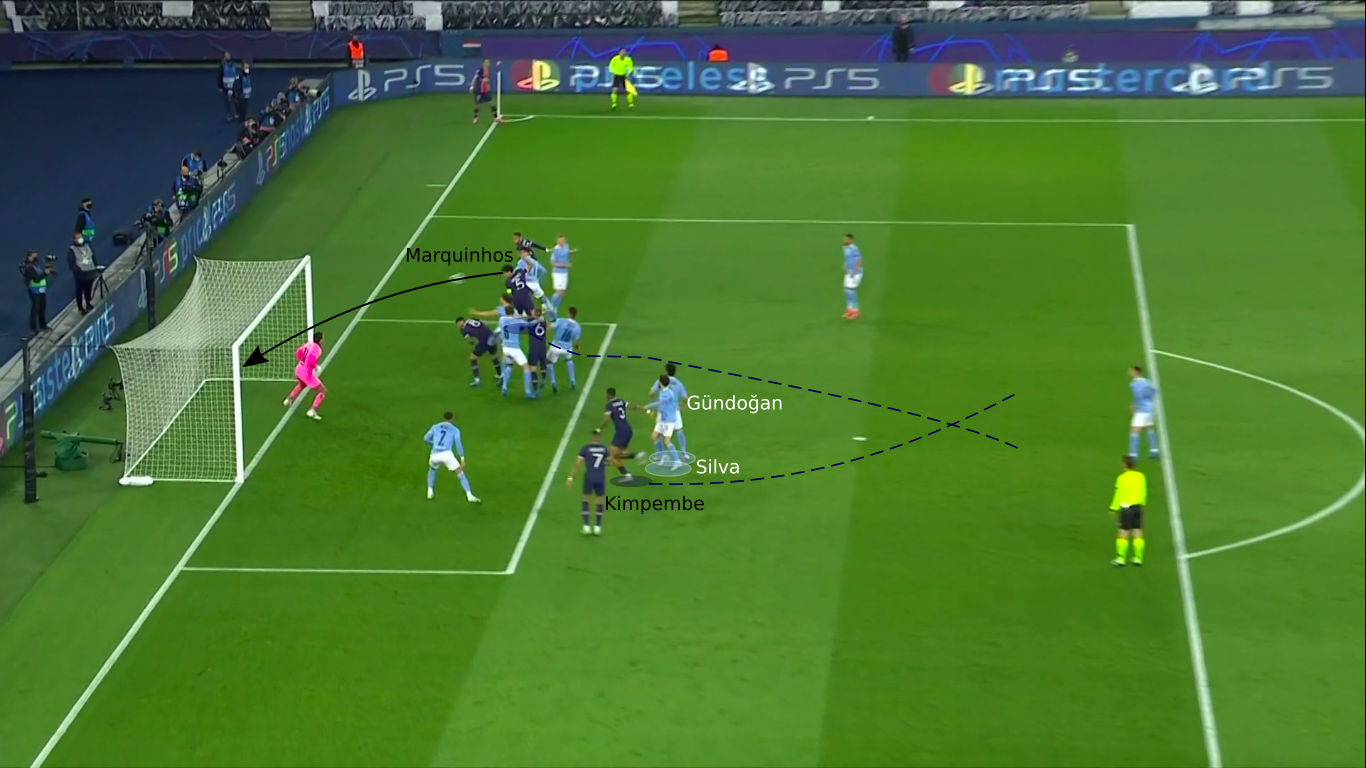 In the case of Marquinhos’ goal, the Brazilian made a run to the near-post, while Kimpembe went in the other direction. This flurry of motion left Gündoğan and Silva dumbfounded, leaving them with a watching brief. Marquinho ended up flicking his header home, but had he missed the ball, PSG would have probably scored anyway as Kimpembe was free at the far-post. 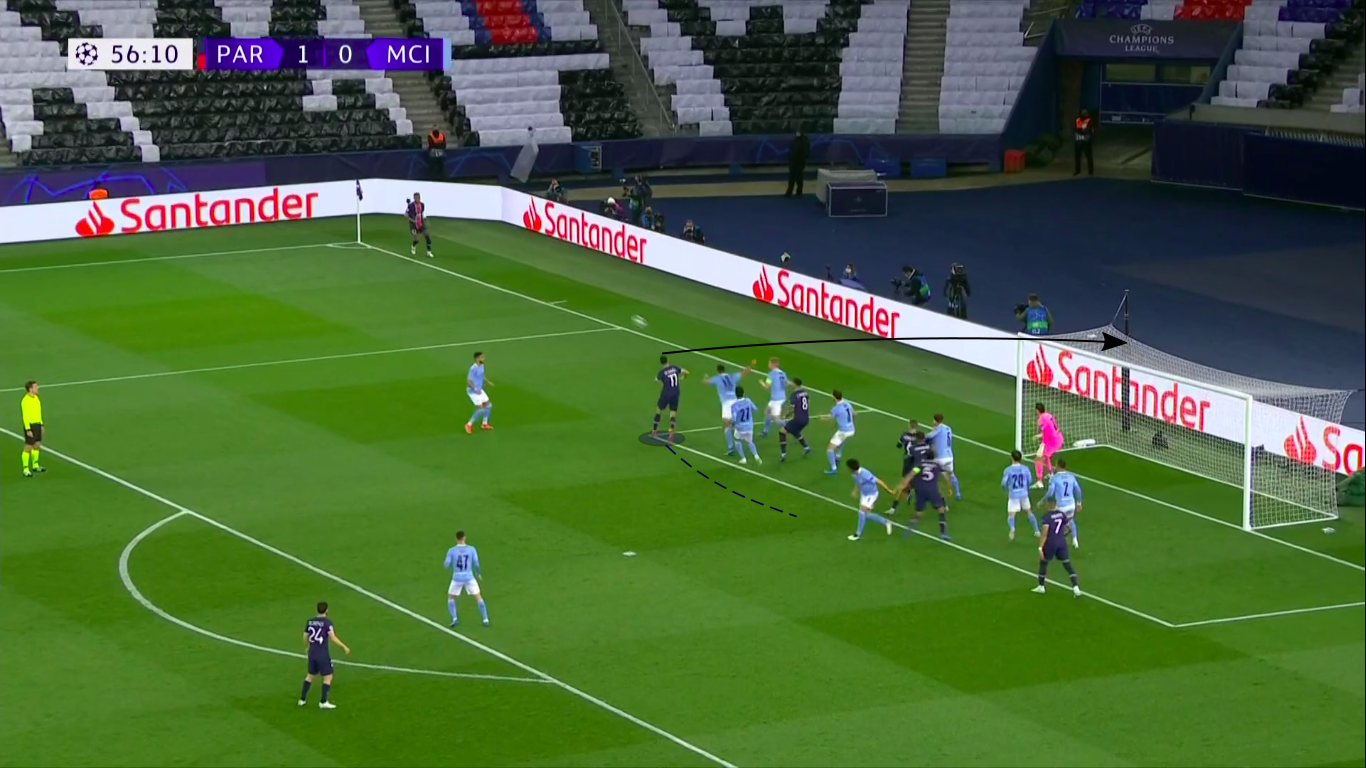 In other cases, those congesting the six-yard box could make the run to the near-post to head the ball, although both such efforts went off target as these players were not the best at heading.

Paris Saint-Germain are used to keeping a fair amount of possession to themselves in Ligue 1, so they posed quite a challenge to Manchester City in this regard. Guardiola’s side responded with another modified pressing structure. 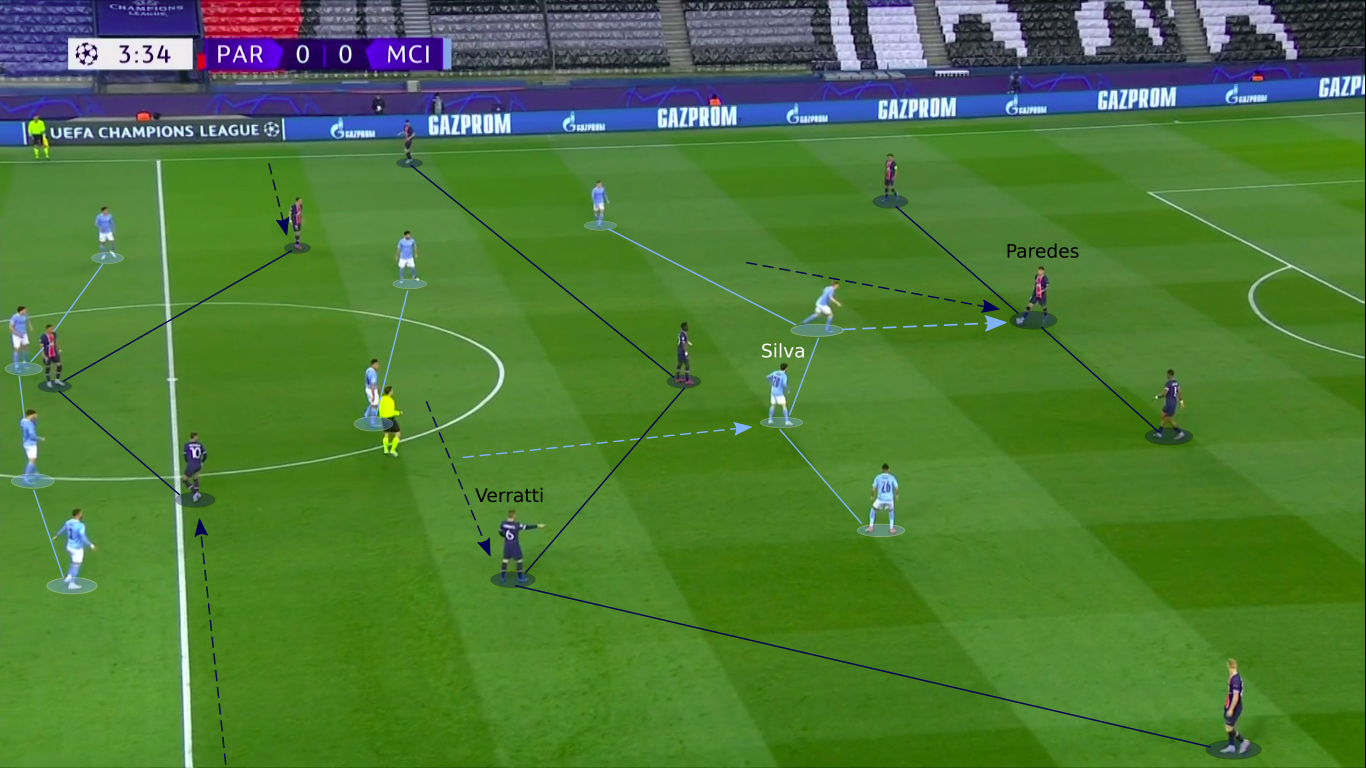 Their shape for it was a 4-2-4, as Silva pushed up from midfield to join the front line. As you can see here, Kevin De Bruyne was the trigger, and he usually went for Paredes, who would drop back from midfield to create a back-three in possession for PSG. Further ahead, the wingers (Neymar to a greater extent) tucked inside to accommodate overlapping runs from the full-backs (although those were rare), while Idrissa Gueye stood alone in holding midfield as Verratti occupied the left half-space further forward in a 3-4-3. 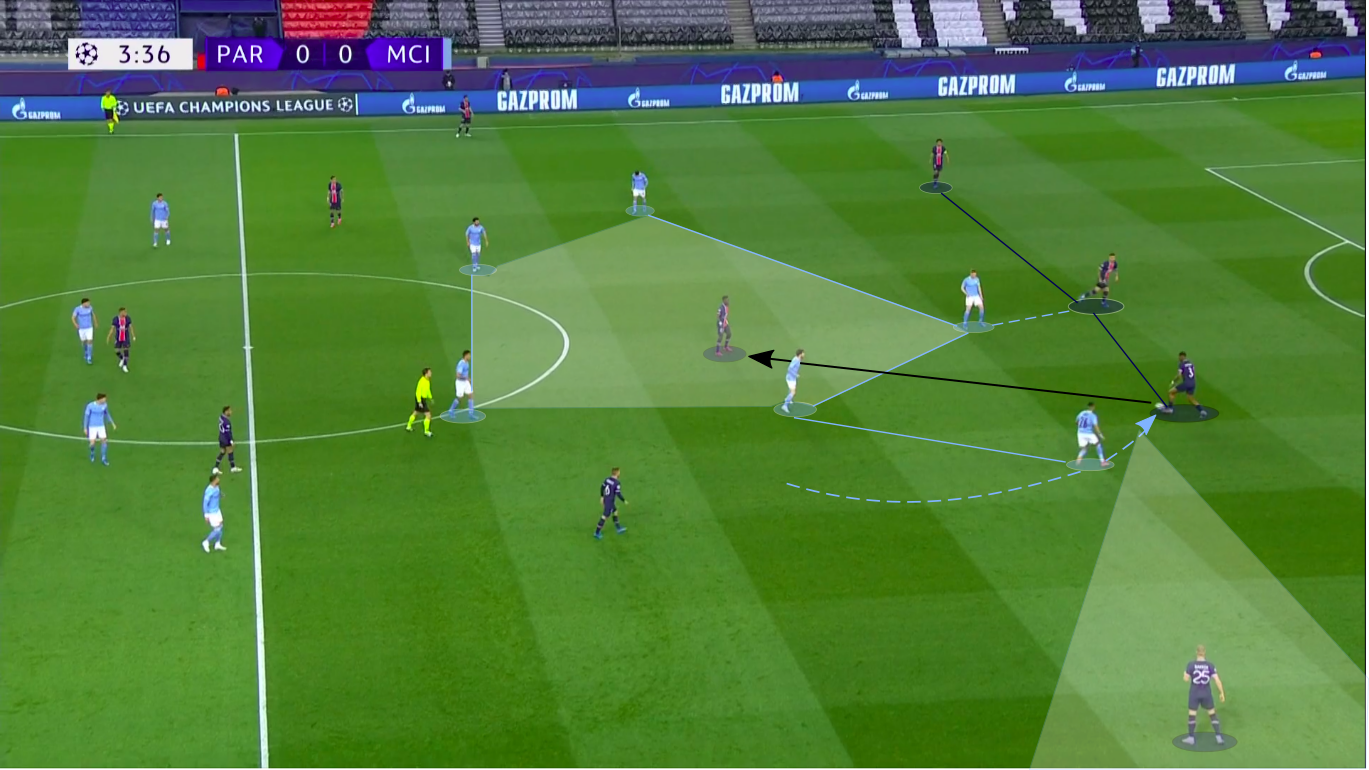 The idea from a Manchester City perspective was to force their opponents to pass centrally into Gueye. They did so by asking the wingers to angle their runs while pressing, which would take the full-backs out of the game. Since De Bruyne’s triggering movement would be directed towards Paredes, he too would be taken out of the match, so the centre-back in possession would have to either play a risky ball or feed Gueye, who would be surrounded using the holding midfield duo.

The trade-off for this was that City would not be able to press all the way up the pitch, as the addition of Navas as a passing option would render their strategy ineffective. Therefore, they had to concede a little bit of territory to exercise this plan. It did not quite work, however, as Gueye displayed great composure by picking 31 of his 40 passes in the match in just the first 45 minutes. 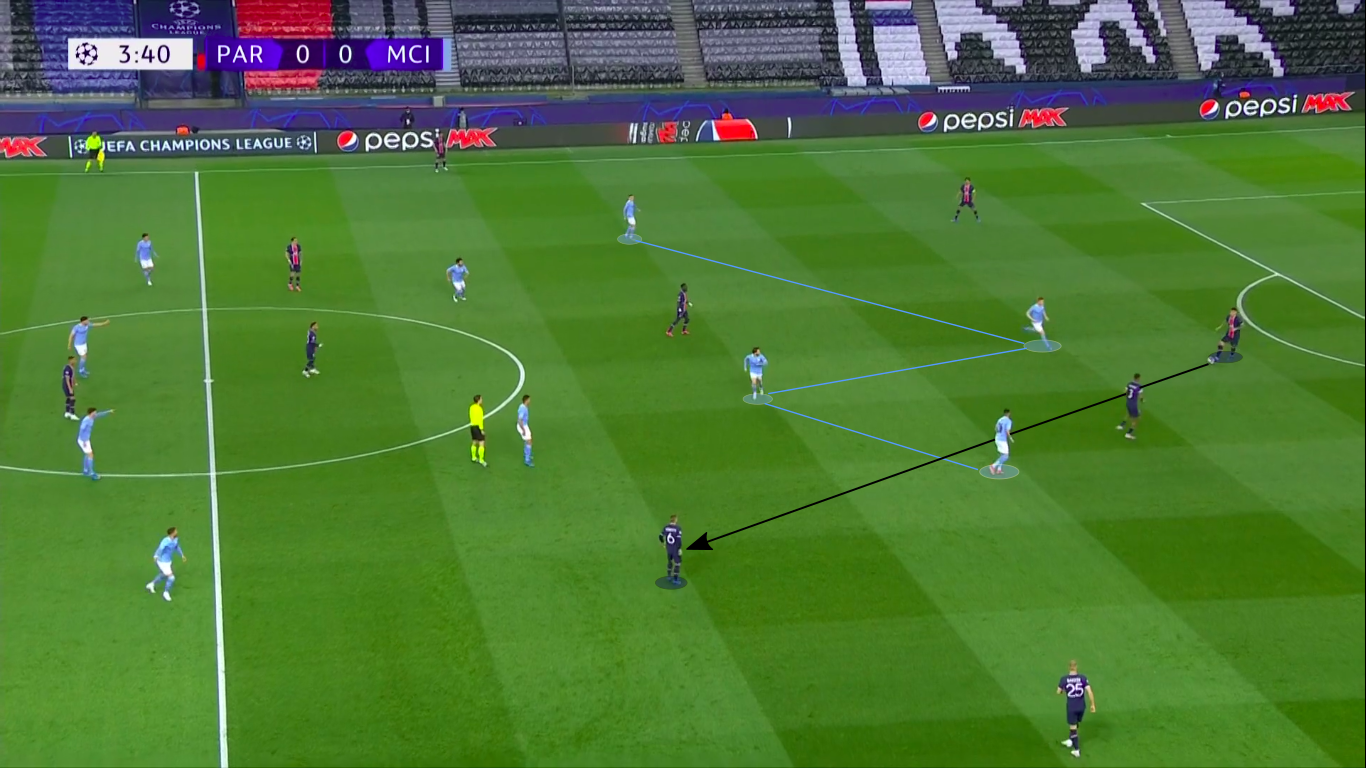 Further, Paredes’ inclusion at centre-back in possession also proved crucial. He often looked to find Verratti, and although doing so involved a risk, his pass success rate of 92.3% indicates that he found the Italian midfielder in most cases.

In either case, their pressing was not too successful as PSG managed to keep over 45% of the ball in the first period, so alterations were in order at half-time. 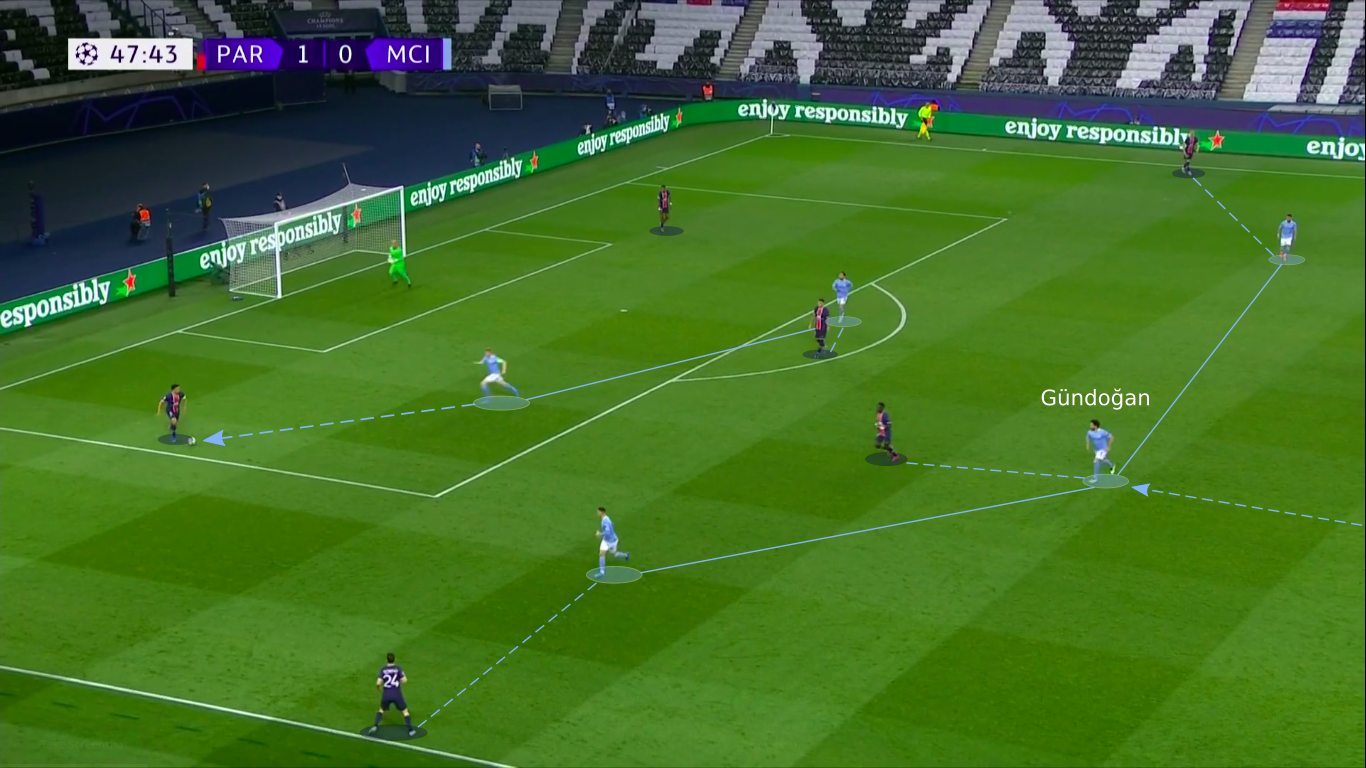 Instead of attempting to trap Gueye in the second half, Manchester City chose to press Paris Saint-Germain all the way up the pitch. They did so by switching to a sort of a 4-1-3-2, which saw De Bruyne or Silva press the centre-back in possession while the other kept Paredes in check before he could drop between the centre-backs, and most importantly, Gündoğan pushed forward to prevent Gueye from having any space to receive the ball.

This worked a lot better, as the Senegalese midfielder was restricted to 10 passes in the second period and PSG’s possession-play was heavily stifled, with the hosts only managing one shot (that too from a set-piece) with less than 35% of the ball.

As is always the case, Manchester City kept most of the ball with 60% of possession. 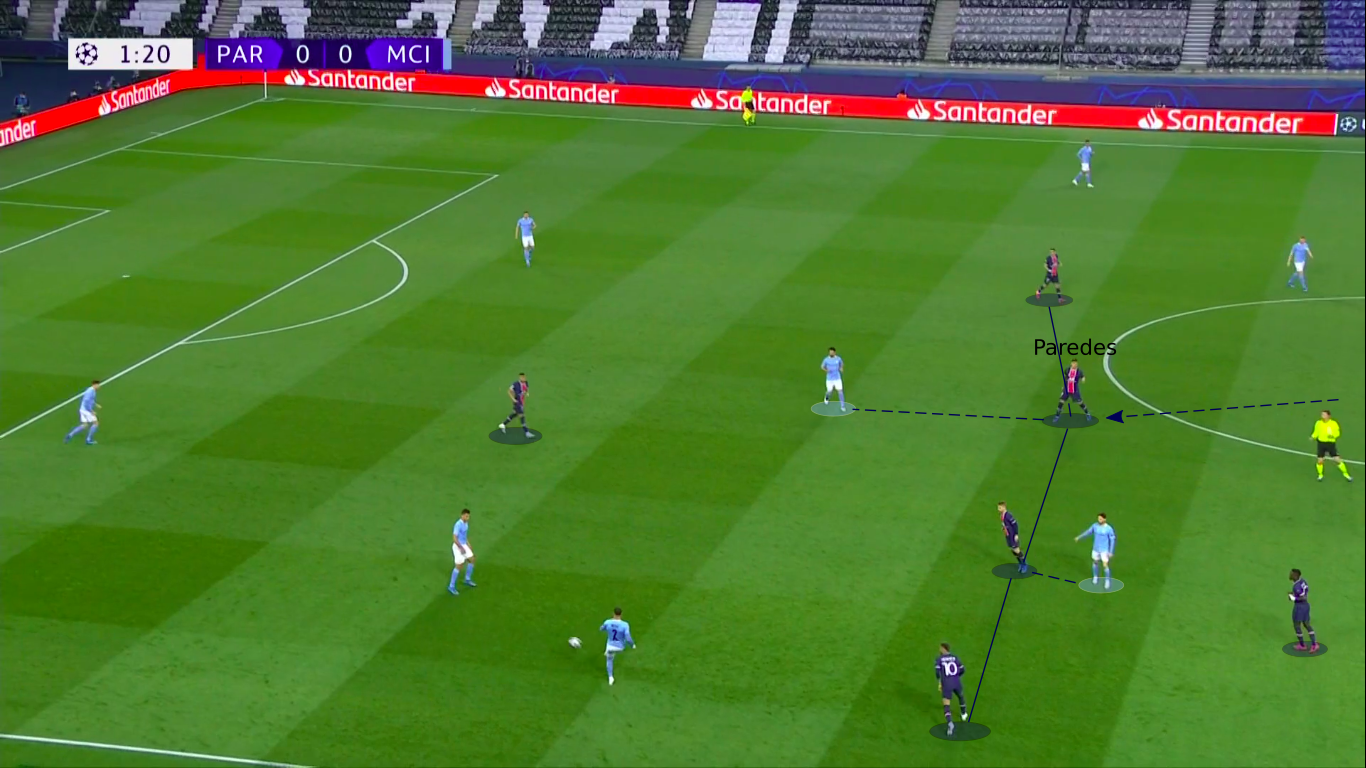 Paris Saint-Germain offered some opposition to their possession in the initial stages by pressing in a 4-1-4-1 shape, as Kylian Mbappé spearheaded it with Paredes (who pushed up from holding midfield) and Verrati marking Gündoğan and Silva respectively alongside the wingers, who kept the full-backs in check. 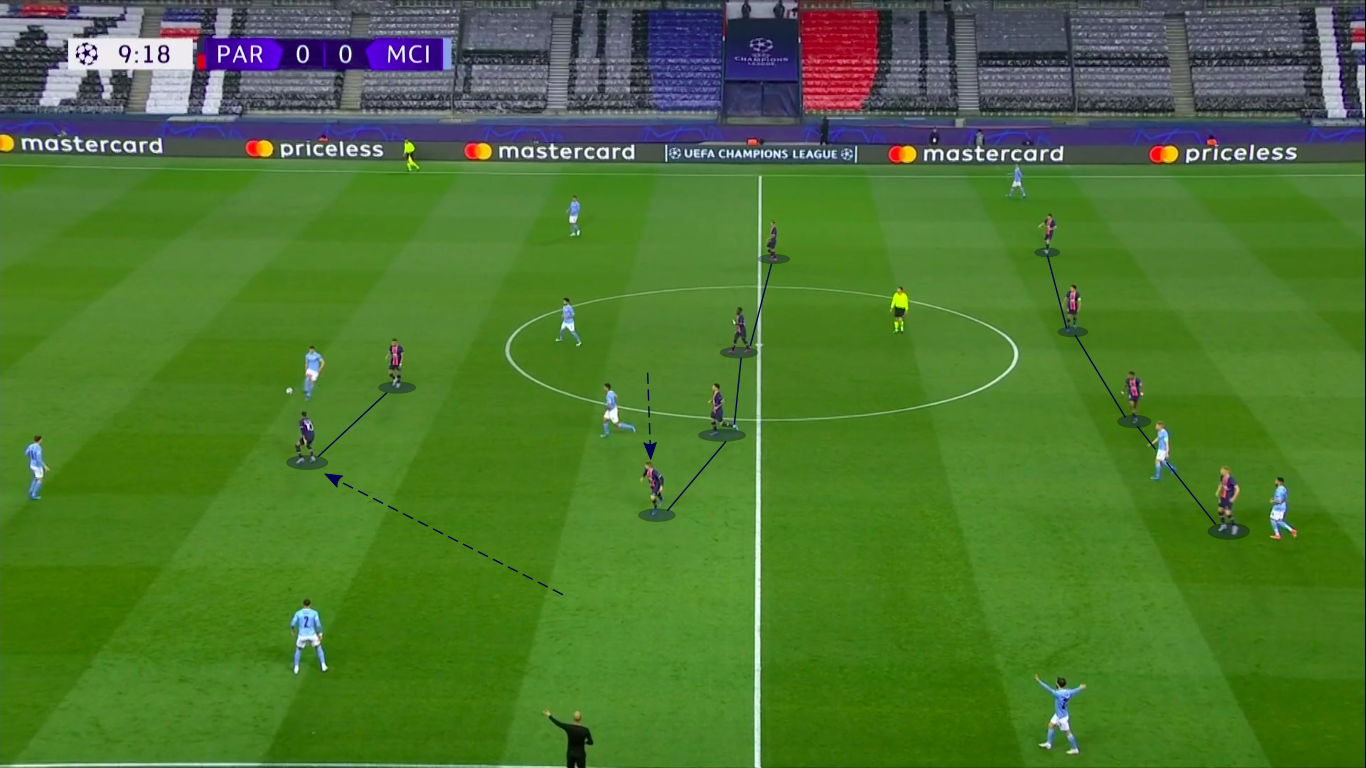 For large periods of the match, especially after taking the lead, PSG were quite happy to drop into a 4-4-2 mid-block, with Neymar joining Kylian Mbappé up front while Verratti slotted in at the left midfield position. 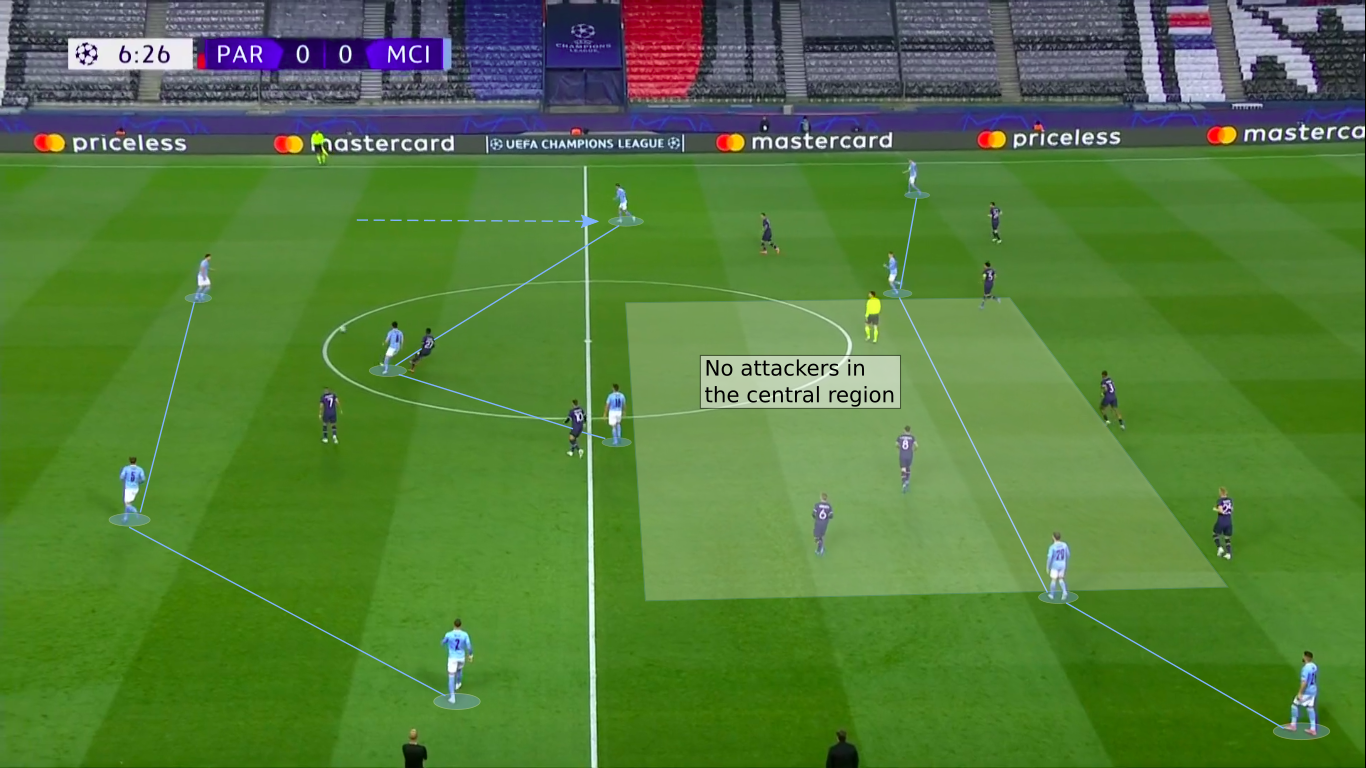 Manchester City started off with a lopsided 3-3-4 in possession that very much resembled the shape they had for most of the Carabao Cup final against Tottenham Hotspur, as João Cancelo pushed ahead of the back line to join the midfield line on the left, while there was a dual split up front with Phil Foden and De Bruyne on the left and Silva and Riyad Mahrez on the right, with the centre being left unoccupied.

This might have worked against a 4-3-3 in the Carabao Cup, but PSG’s 4-4-2 faced no major issues with the wide split up front, so City had to change their shape quite quickly. 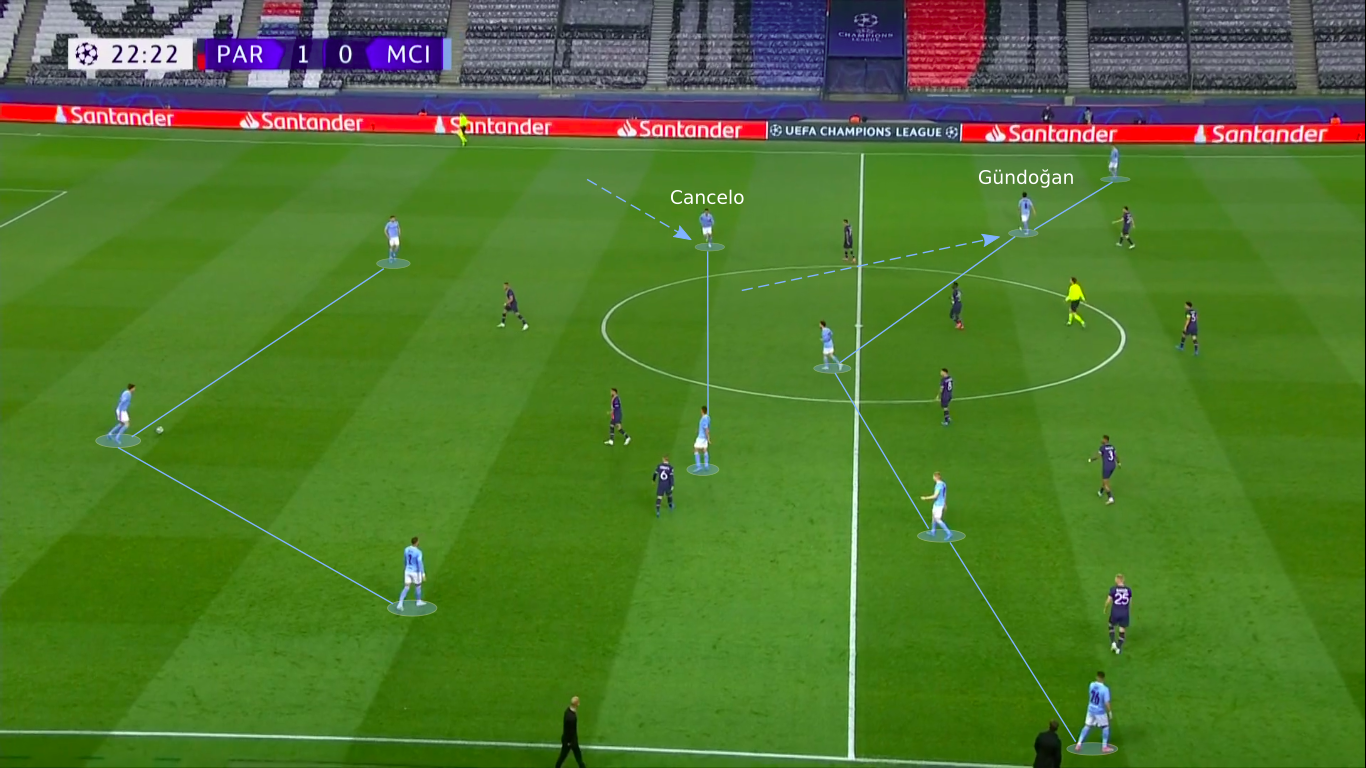 After conceding, Manchester City went back to the tried and trusted 3-2-5 featuring Cancelo as an inverted midfielder, while Gündoğan started pushing forward to join the front line which included Silva as a (sometimes extreme) false-nine and De Bruyne on the right. With this, the ban on occupying the central region was obviously lifted. 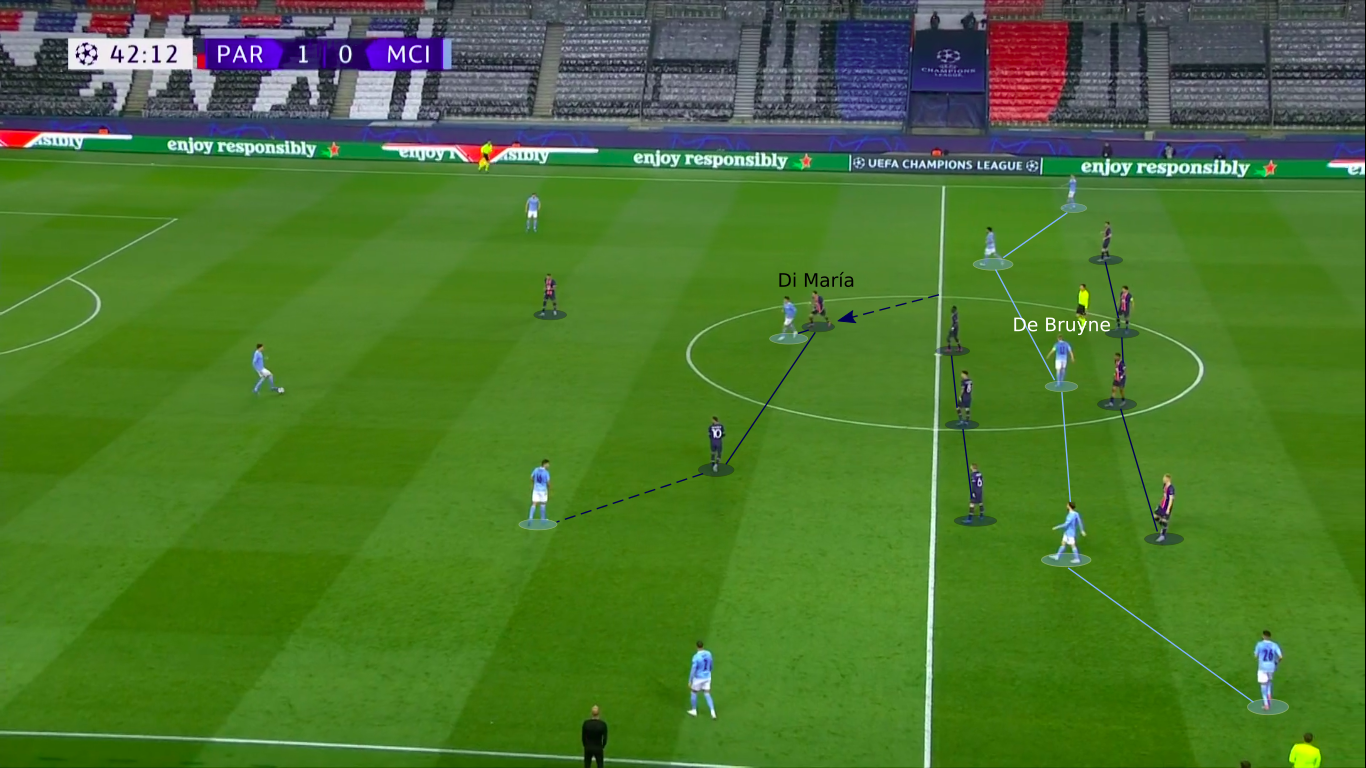 A minor change to the front line soon thereafter saw De Bruyne and Silva swap positions, but more importantly, this image shows how PSG combated City’s switch in system, as they used Ángel Di María to man-mark Cancelo. Since Neymar concerned himself with Rodri, their shape quite often morphed into a 4-3-2-1. 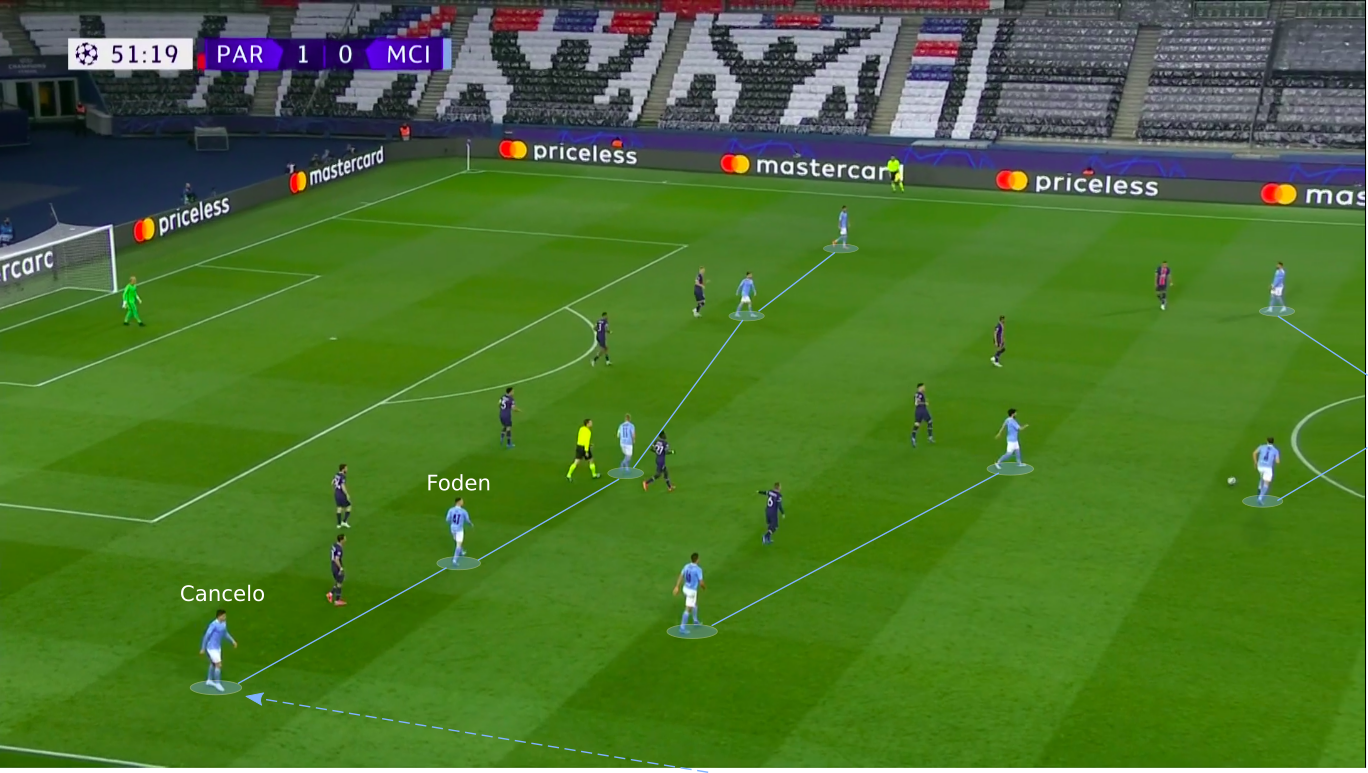 So, Manchester City came out with another altered system in the second half. The formation remained a 3-2-5, but Cancelo’s term as an inverted full-back was cut short, as he was instead asked to operate as an advanced full-back and join the front line, where Foden moved to the inside-left position to let Gündoğan drop back into midfield.

This is the system that Guardiola’s side ended up looking most settled with, as they put in a dominant second-half performance, especially after the introduction of Oleksandr Zinchenko in place of Cancelo to use a natural left-back in the advanced role. Quite importantly, they retained possession superbly in the second period, which was as important as the modified pressing structure in keeping PSG quiet.

For all of their experimentation in terms of pressing and possession shapes, Manchester City’s two goals were rather flukish, as one was a cross that was never meant to creep into the far corner, and the other was a free-kick that needed a hole in the wall to go in. Either way, though, it must be said that the visitors absolutely deserved this victory for their dominant performance overall.

Paris Saint-Germain were restricted to set-pieces to trouble Ederson, who alone managed more touches than Mbappé in the match, which is a great statistic to show how well the French striker was contained. Neymar did not look too bright either for most of the match, as the French champions found next to no joy in transition, which what they relied on for their success against Bayern Munich. Therefore, Mauricio Pochettino has a fair bit to think about before travelling to Manchester, especially considering the fact that his side also has a points deficit to overturn in the race for the Ligue 1 title.

The second leg at the Etihad Stadium promises to be yet another great display of fantastic football, and it will take place as soon as next Tuesday.