A very English young Premier League XI of the season

Manchester City dominated our Premier League XI of the season; now it’s time for some English supremacy among the young guns.

Both Phil Foden and Ruben Dias made the senior team but we’ve left them out of this one to make more space for others. All the players included had to be 23 or younger at the start of the season.

Goalkeeper: Illan Meslier
As lightweight-looking as first season David de Gea or Kepa Arrizabalaga, without any of the drama of his spaghetti-armed counterparts. Twenty is ridiculously young to be a Premier League goalkeeper and he’s already one of the best. His reactions saves are wonderful, his agility is fantastic, but it’s the calm head on such young shoulders that beggars belief. £5.85million? What a signing.

Right-back: Aaron Wan-Bissaka
For all the talk of a lack of front foot oomph and the obvious limitations of his game, Wan-Bissaka has had another outstandingly consistent season: he’s started and finished all but two of Manchester United’s Premier League games. It’s that consistency and trustworthiness that just gives him the nod over Reece James, who can count himself unlucky to miss out.

The criticism Wan-Bissaka receives for his lack of end product and attacking influence is valid, but that side of his game will surely improve when United and Ole Gunnar Solskjaer find a long-term solution to their right-wing problem.

Centre-back: Wesley Fofana
Moves to the Premier League at the age of 19 after half a senior season with St Etienne, in the middle of a pandemic for £31million – the second highest fee Leicester have ever payed for a player – and is now playing without eating. He’s looked completely unperturbed by it all.

Centre-back: Ezri Konsa
Aston Villa have conceded 38 goals this season having let in 67 in the last campaign. Konsa and Tyrone Mings will make our partnerships of the season when the time comes. Eric Dier feels the criticism he receives is “unfair” but just as unjust is his inclusion in the England squad over Konsa.

Left-back: James Justin
Such a shame he got injured when he did. He was arguably the best English full-back at the time, which is quite the feat. And for all the hullabaloo over Trent Alexander-Arnold’s exclusion and the shoulds and shouldn’ts of the Euro 2020 squad, Justin could have sneaked in. He’s a right-back who’s played predominantly as a left-back, but also at centre-back this season; Gareth Southgate loves some squad versatility.

Right midfielder: Raphinha
He could slot into any team in the country and cope very comfortably – it’s no wonder Liverpool and Manchester United are thought to be sniffing around. Great name, great skills, great energy and unfortunately for Leeds, great mates with Bruno Fernandes. A right-wing problem you say, Ole?

£80million for Jadon Sancho, or £40million for Raphinha and more money for a midfield twist? 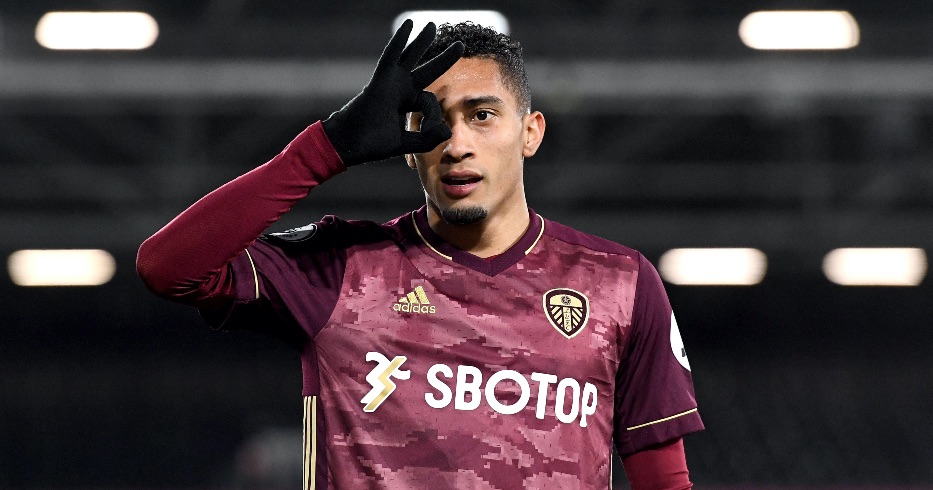 Central midfielder: Youri Tielemans
Remember when player cam was a thing? They would announce it on Sky Sports before kick-off – “on player cam today is Steven Gerrard,” or whoever. It was a madcap option presumably dreamed up in attempt to recreate the matchday experience, when peripheral vision allows you to focus on a player for a minute or two without any real danger of missing a goal or a moment of drama. The virtual version never worked.

But were that to still be a thing, or were people currently allowed in stadiums to enact their own player cams, focus at a Leicester game would be drawn to Tielemans. He’s so technically proficient and wonderfully effortless in all that he does: finding space; playing no-look passes; shielding the ball. Even the way he shoots seems to be done with a minimum of fuss.

Perhaps another Mogwai-soundtracked movie could be made following Tielemans around against Burnley instead of Zidane against Villarreal – ‘Tielemans: A 21st Century Portrait’. Actually, don’t; it was incredibly dull.

Central midfielder: Mason Mount
‘What a journey’ was best pal Declan Rice’s tweet after Mason Mount scored the goal to ensure Chelsea’s passage into the Champions League final. It was the sort of moment that slices through football tribalism like a breakaway super league. If you can’t put petty club loyalty aside to enjoy a young player scoring for a club he’s been at since the age of seven, after an outstanding season in which he’s proved all doubters wrong, you should not be watching football.

He’s been Chelsea’s best player this season and this could be their greatest season ever.

MM. What a journey

Left midfielder: Harvey Barnes
Another Leicester player who would have been right in the mix for an England call-up had his season not been sadly curtailed by injury. The extraordinary pace remains his biggest asset, but the touch, close control and end product are getting better and better. The on-song days were more regular this season than last.

See also  Valentin Rongier excludes nothing for his future

Striker: Dominic Calvert-Lewin
He was never likely to maintain the goal-a-game pace he set for himself in the opening 11 Premier League fixtures of the season, but his relative struggles since then can be caveated by three different short-term injuries. He’s undoubtedly learned the knack this season: to be in the right place at the right time; to get five to ten goals a season though those Filippo Inzaghi one-touch finishes.

Striker: Marcus Rashford
Considering he’s not been at his very best for a little while now, 20 goals and 13 assists in all competitions is pretty damn good going. After five seasons in the United first team and a year of saving children’s lives, it’s easy to forget this bastion of football and society is only 23. What a remarkable human being.

The post A very English young Premier League XI of the season appeared first on Football365.

The youngest players to debut for Barcelona since 2000